Regency period antique Tea Caddy – a rare and unusual container for tea in the shape of an Egyptian pylon surmounted by a cornice and decorated with Egyptian symbols on a gold background. English, early 19th century courtesy Martyn Cook Antiques, Sydney

Over the past few centuries containers, including boxes and caskets of all shapes and sizes, have played an important role in everyday life. Many lay gathering dust in storage units for years, because for a long time they were only thought of as mere containers.

Today with knowledge and information to hand they are recognized as being important cultural objects and, in some cases, precious works of art. This means that for charm collectors or box buffs like me they are completely collectible in their own right.

Many antique tea caddies  like this great number found in an antique store in Sydney in 2011, were found from the late eighteenth and early nineteenth centuries in England.

They have a restrained style and shape and exhibited what we would have described years ago as a certain je ne sais quoi. This is a French phrase, which means quite literally ‘I don’t know what’. Its use is about trying to put into words why an object is so aesthetically pleasing to your particular eye. 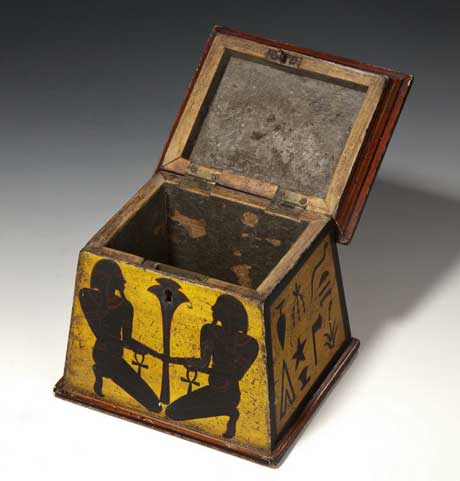 When this early nineteenth century number is open it is easy to see the lead foil lining, which originally helped keep the tea fresh, has been partly lost. The boxes value as a collector’s item today lays in its shape or form, its decoration and its style. It is 14cm high, 16.5 cm deep and decorated all over with Egyptian symbols against a rich gold background.

It is a very appealing and would provide a point of interest in any stylish interior. 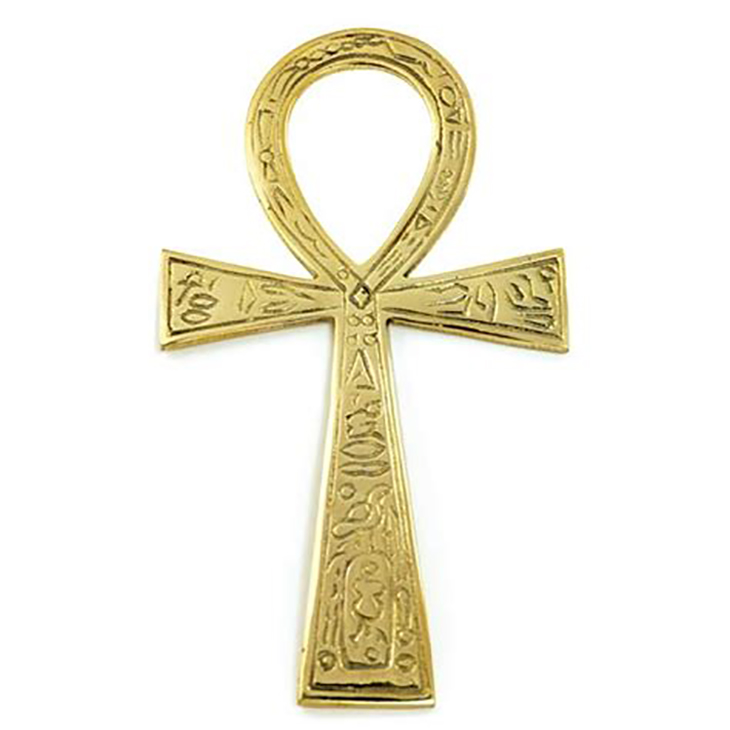 On the key façade of this caddy are a pair of Egyptian godlike images each holding an Ankh, an ancient Egyptian hieroglyphic character. The Ankh is believed to refer to the key of life, the key of the Nile or crux ansata, meaning ‘eternal life’. Ancient Egypt and its culture declined and disappeared over two thousand + years before. The last vestiges of that living culture ceased to exist in AD 391 when Roman Byzantine Emperor Theodosius I (346 – 395) closed all the pagan temples throughout the Roman Empire.

It was not until 1798 when French military leader Napoleon Bonaparte (1769 – 1821) invaded Egypt with his army and a huge team of creative artists and scientists in tow, that the ancient culture was re-awakened from its long slumber, much of which was covered in sand. 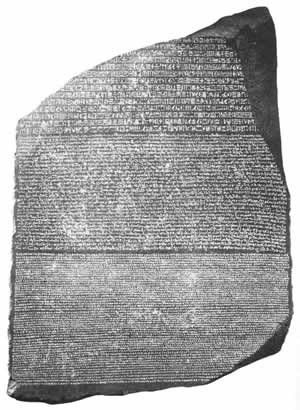 The key to understanding the language of the ancient Egyptians, The Rosetta Stone

In 1799 one of his soldiers Lieutenant Pierre Bouchard discovered a slab of stone nearby to Rosetta. The stone was inscribed with a decree that had been issued at Memphis in 196 BC on behalf of King Ptolemy V.

The fragment was carved with the same text in two languages, Egyptian and Greek. The same text was also displayed using three writing systems, hieroglyphic, demotic and the Greek alphabet. Here at last was the essential key to understanding this amazing civilization.

It was a tremendous piece of luck enabling the French classical scholar, philologist and orientalist Jean-François Champollion (1790 –1832) to transcribe and unlock the ancient hieroglyphic code and it took Champollion until 1822 to complete his work. After that other scholars joined in and helped to interpret three thousand years of this amazing culture and its stories.

In England, especially following the victory over Napoleon at the Battle of the Nile on the 2nd August 1798, a growing passion for images and shapes from its shores became fashionable. During the Regency (1811 – 1820) of George as Prince of Wales and his reign as King George IV (1820 – 30) ancient Egyptian culture grew more popular because he loved fantasy, the fantastic and the exotic. 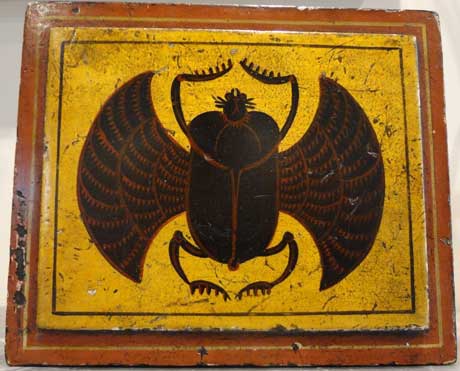 It further increased in popularity in the Victorian age as exciting discoveries revealed more and more information. The Scottish painter David Roberts (1796-1864) spent a great deal of time there.

He went about recording through sketches and paintings, views of the remains of this intriguing culture as it emerged from the sands of time.

His sketches made between (1838-40) helped fan the flames of desire for all things Egyptian. As a passionate pursuit Egyptomania would persist well into the twentieth century and climax with the finding of the tomb of the youthful Pharaoh Tutankhamun and all its amazing treasures.

This tea caddy is in the tapering style of an Egyptian architectural shape a pylon, which is surmounted by a cornice. The form was inspired by re-discovered ancient Egyptian buildings, such as the great gates of the Temple of Isis on Philae Island in the middle of the Nile. Pylon gates such as those at Philae played a critical role in the symbolic architecture of a cult building, which was associated with rebirth and recreation. The nineteenth and twentieth centuries saw Egyptian inspired pylon architecture employed for bridge building all around the world with the Sydney Harbour Bridge being one of the largest examples.

All the symbols decorously arranged on the surface of the caddy seemed to have been picked randomly when it was first made, without a real understanding of what they meant. This only serves to add to its charm. We would certainly hope that no one who has owned it over the centuries since it was made has been dispatched by imbibing its contents. On its lid is an Egyptian sacred scarab (Scarabaeus sacer), or dung beetle with wings outstretched. The scarab played an important role in Egyptian creation myths and as a motif represents rebirth. It lay and rolled its eggs inside a ball of dung. Once buried the young consumed the fertile excrement until they emerged from the ground nourished and fully formed.

When ancient Egyptians observed this phenomenon they were fascinated, intrigued and confused and likened the little beetle and its rituals to the rising sun each morning coming from out of the earth to create a new day. Egyptian: Scarab, from an amulet in the tomb of Tutankhamun

As a symbol the scarab came to represent Khepri the Sun God, who was the god of all creation and had the ability to be reborn. The Sun God was the dominant deity of the ancient Egyptian religion. He had the ability to take on other different forms as well as that of Khepri who would attach falcon’s wings to his body when he wanted to fly.

In ritual a scarab with outstretched wings was placed in the wrappings of a mummy so that the sun would continue to shine on the departed soul’s journey to the afterlife. It was laid upon the recipient’s breast so it would assist when they were standing in the judgment hall of Osiris, god of the Underworld. It helped secure exemption from the possible performance of an evil afterlife.

Perhaps the most famous example of what is now known as the heart scarab, is the superb yellow-green pectoral scarab found among the entombed provisions of the most well known of all the Egyptian Pharaoh’s Tutankhamun. 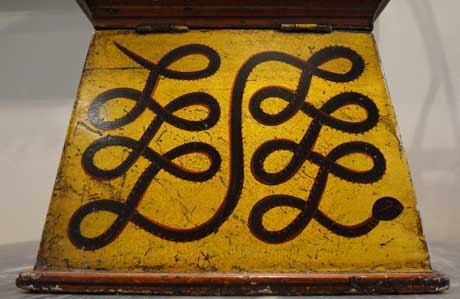 On one side of the box are the interlaced coils of a cobra, slithering at very great length. Wadjet the cobra goddess was associated with ancient Lower Egypt and the Nile delta representing the “fiery eye of Re”. Starting in the Middle Kingdom the Uraeus, or rearing cobra, appears on the crown or headdress of royalty.

It is a protective symbol because ancient Egyptians believed the cobra would spit fire at their approaching enemies. An array of hieroglyphics and symbols are painted on the other two sides. They are used purely for decorative purposes. It’s all just a lot of fun really, but it does help make the object desirable for any collector or connoisseur of tea caddies.

All the elements decorate a box that for much of its life contained leaves of tea, a drink first introduced into England in liquid form during the seventeenth century via the English East India Company. When tea leaves finally began to arrive in some quantity at London they were stored in metal canisters, inside tea chests shaped like trunks. These days we seem to use the word ‘caddy’ as a collective term for all tea containers when in reality a ‘tea caddy’ is very different from a tea chest. A tea caddy was a container in its own right. The word caddy deriving from a Malay Chinese word “kati” which means a measure of tea weighing about a pound and one third.

The earliest tea caddies in England were made in timber, usually with painted or inlaid decoration. This might consist of flora, fruit, shells and many other designs. Shapes could be square, rectangular, oval, six or eight sided. Other sought after wooden caddies were in the shape of different fruits, mostly apples and pears.

A tea chest was bigger than a tea caddy. It had room inside to contain a pair of inner ‘caddies’ together with a cut glass blending bowl to mix the tea leaves in. Designing your own blend was important and became a symbol of status. If you were very lucky, the London store Fortnum and Mason, which had been founded in 1797 would sell it. At Fortnum’s Tea was its first specialty product and their website says today it remains ‘close to our hearts’.

By the end of the eighteenth century as the industrial revolution was swinging into gear more and more households were able to afford and drink tea.

This means that at the time this charming tea caddy was made, there was a growing demand for more fabulous containers to store the precious tea leaves in and, to keep them both fresh and safe.

Let’s hope it can continue to convey the message and story of its cultural journey for a very long time.