Sotheby’s the auction house, founded in 1744, have a sale coming up in July at their London premises in Bond Street offering fifty antique treasures, augmented by royal and historical provenances. They all have in common extraordinary quality in design, superb materials and outstanding craftsmanship while demonstrating the diversity of styles that stretched from the Renaissance to the Retro age.

The rediscovery of ancient texts during the 15th and 16th centuries in Europe changed everyone’s perceptions and a new group of accomplished architects and artisans collectively ushered in a new era in art, design, music and style.

Central to that development was the emergence of the artisan as a creator; an artist who was sought after, supported and respected for his erudition and imagination. The building of private residences became an important activity, with the notion of privacy itself for the family, a whole new focus one that required people to build in a manner appropriate to one’s station in life, neither too meanly or too grandly.

On offer from the late Renaissance period, and coming from a prestigious aristocratic English stately home, is a magnificent inlaid antique marble table top, made at Rome dating from the late 16th century when the mountains of Tuscany offered up in great abundance white marble from Carrara, dark green marble from Prato, pink from Siena, red from Roccalbegna as well as other veined and coloured marbles. This table is a showcase for them all. 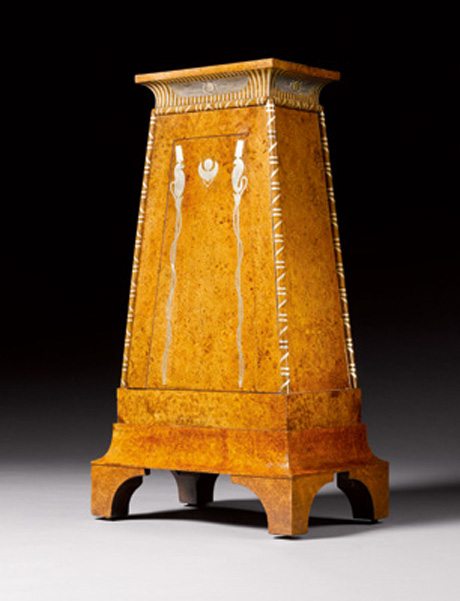 Among the highlights of the sale will be an Empire style silver-mounted and inlaid amboyna and mahogany medal (coin) cabinet, circa 1810. The timbers it was made from Amboyna, a rich, honey-coloured timber with a very pronounced burr figure and mahogany, which is reddish brown in colour, moderately light and soft with an interlocked grain that is highly figured and very stable, were both used for bespoke cabinet work where appearance was of chief importance.

This description reflects the importance in the world of decorative arts for establishing a provenance for a piece. This is all about its history; generally coming from a collection that has been well documented and can be traced back to its origins. These pieces always fetch a higher price. It means the piece has a recorded and documented history and, if the person who designed it, made it or owned it has achieved some ‘fame’, then its value should increase.

In this case all those involved were celebrities in their own right. Charles Percier (1764 – 1838) the cabinet’s designer worked for France’s Emperor Napoleon and Empress Josephine. Along with his partner Pierre Leonard Fontaine (1764 – 1838), they were among an elite group of influential people who truly believed ‘correct aesthetics’ were necessary outward signs of how their society worked socially within.

François-Honoré-Georges Jacob-Desmalter (1770–1841) was one of the most successful ébénistes or cabinetmakers in Paris during the period 1796-1825. His father Georges Jacob had also been an outstanding chair maker of the Louis XVI style during the neoclassical era and his son made a throne intended for the Senate whose upholstery was adorned with gold-thread embroidery featuring Napoleon’s industrious bee symbol, the imperial emblem and the emperor’s monogram.

His son grew up with a thorough understanding of both the style and its progression during the lavish Empire period of Napoleon and in the Beidermeier period following Napoleon’s exile.

This was when the style’s original lavishness was pared down to reveal simple, functional and yet elegant lines, while retaining the same principles of harmony and order. Martin Guillaume Biennais was Napoleon’s goldsmith whose rags-to-riches story is an integral part of the Napoleonic era legend. During his time as first goldsmith to the Emperor Biennais interpreted the designs of Charles Percier and provided silver embellishment for many fine pieces.

That included regalia used at Napoleon’s coronation, fine weapons and ceremonial necklaces, including the National Order of the Legion of Honour, which was founded by Napoleon in 1802 and is amongst France’s highest awards and considered the first modern order of merit.

Baron Dominique Vivant Denon was Napoleon’s Minister of Arts. He was also the developer and first director of the Louvre Museum, a collector and a renowned and very fine engraver.

He went with Napoleon’s grand expedition to Egypt in 1798 when as a means of destroying England’s land access through to India its richest possession; either overland or through the reconstruction of the old canal in the isthmus of Suez.

Vivant Denon had a taste for adventure and he and Joseph-Pierre Redoute, the flower painter, together with poets, talented scientists and scholars, all spent 14 months in Egypt where a black stone was discovered at Rosetta and a fellow traveller Jean Francois Champollion, who knew nine oriental languages, unravelled the mystery of hyroglyphics.

The cabinet with all this wonderful history attached to it is strikingly similar to another with the same provenance now in The Metropolitan Museum of Art at New York. It is made of mahogany with silver embellishments and the association should assist the Sotheby’s sale price. Also from the neoclassical style period on offer is a George III satinwood, marquetry and giltwood pier table, circa 1772, by England’s famous cabinetmaker Thomas Chippendale, as well as a superb pair of turned and engraved ivory covered vases in France’s King Louis XVI taste.

During the neoclassical age there was an increasing demand for lighter more elegant furniture at which Thomas Chippendale (1718-1779) excelled.

An 18th century village master craftsman, who at first designed and made furniture at Otley in rural Yorkshire, Chippendale was a progressive ambitious chap. He moved to London where he produced some of the greatest examples of English furniture during the eighteenth century, the golden age of hand craftsmanship.

Thomas Chippendale offered all his clients a complete house furnishing service and he supplied them with enormous quantities of furniture of all kinds and design styles made from many different exotic timbers.

Satinwood was a species of citrus that was golden yellow to brownish, with darker streaks. It was lustrous, fragrant, smooth, very hard, strong, durable and stable. With a fine uniform grain and texture it polished well and East India satinwood was considered the finest. The vases have chased and gilded bronze mounts, made circa 1785 out of ivory by François Voisin and lavishly embellished with fabulous gilt bronzes attributed to Pierre Philippe Thomire (1751-1843).

Neoclassicism was never just a fleeting style or a label invented for the convenience of art historians. It was the culture of an age where men deliberately set out to rediscover the virtues of ancient classical art and architecture in such a manner the results are still relevant today. They studied the ancient Greeks and their achievements in all the arts and architecture avidly, because they appreciated their acute appreciation of the natural forces with which they were surrounded.

Ancient Greek vases became role models for fashionable new vases that appeared in custom made niches or on fabulous table tops, equally at home in pretty pavilions or grand palaces. Thomire produced superb vases and was admired as an outstanding Fondeur-Doreur, a worker who cast, chased and gilded the magnificent mounts so characteristic of French furniture.

There was numerous gilding processes employed, however, the mercurial gilding produced at this time was truly superb, and unsurpassed in terms of its aesthetics and quality. Its downside however was that many of the workers died through incorrect handling of what we known now is an exceedingly dangerous substance.

Thomire had collaborated in the decoration of the coronation coach of Louis XVI in 1776 and so in order to survive through France’s most tumultuous period in history, he turned to manufacturing arms and ammunition during the revolution. Later, when everything settled back down again, Thomire switched back to decorative bronze work under the Consulate of Napoleon and was soon employing hundreds of workers.

He became the first bronzier to be awarded a gold medal at the 1806 Exposition des Produits de l’Industrie and his most prestigious commission was the execution of a cradle for Napoleon’s little son, the King of Rome

Looking back from our own time in retrospect it is very easy to think generally of European culture, and perhaps English and French culture in particular, as just a fabulous collection of wonderful objects, outstanding artifacts and beautiful country houses and chateaus all filled with glorious furniture and surrounded by sensational gardens. And indeed it was all of that but it was also about so much more.

The decorative arts represent the very essence of our culture, its attitudes and philosophies, its fashions and passions, past and present, as they will in the future. The centrepiece of the sale will be a unique recently re-discovered masterpiece – an exquisitely carved hardstone cover, the lost partner of a matching cup in the collection of the Louvre Museum at Paris. It is carved and depicts Venus and Cupid sleeping in a shell c.1600. It has a superb silver gilt mount in the form of Jupiter as a swan and has been attributed to Giovanni Ambrogio Miseroni, a member of a Milan family, who produced six generations of lapidary artists between the 15th to the 17th century. They also established a prestigious Prague workshop, which flourished until 1684.

So many great pieces of furniture and wonderful objects are now in museums and they rarely turn up on an open market giving private collectors an opportunity to obtain them.

This sale should enjoy spirited bidding and I imagine a great many investors will be out in force either in person or on the phone, at the Sotheby’s Summer sale of very fine treasures with all its special pieces of princely taste. Suzanne Trocme, Designer and Author will be in Sydney on July 23 as guest speaker for the first in the Inforum Group’s new Talking About Series, which is held over the cocktail hour. Her talk on Seeing Red is about the power of the colour red in design, its application…