Unlike at London, today there are only a few authentic period interiors left in Paris, having survived from before the French Revolution, or the French’s predilection for changing fashion constantly.

Anton Venoir Interiors in Melbourne specialise in fine French furniture, textiles and objet d’art from the 17th to the 19th centuries. They display their collection at significant events, like the recent AA&ADA Melbourne Antiques fair, as well as in their private showroom – Apt26, where you can view and appreciate the diversity and fine quality of the pieces on offer.

From chairs to clocks from commodes to salon suites and from tulipwood to kingwood pieces with brèche violette marble tops, the selection of antiques also includes mirrors and tapestries.

From the 17th Century to the 19th Century in the styles of Louis XIV, Régence, Louis XV and Louis XVI. each have been carefully studied, assessed and chosen. The mirror in this view of their gallery comes from the south of France. It is decorated with grapes, vine leaves and branches, so redolent of the area’s 2500 + year’s wine tradition. The 18th century in Provence, like the rest of Europe and Britain were glory years, the land rich and fertile providing prosperity through active trade. More sophisticated pieces were influenced by Paris as the eighteenth century Provencal furniture makers responded to the latest fashions from the capital.

In the first half of the century there was the sinuous curves, beautiful ornamentation and asymmetrical characteristics of the Louis XV or Rococo) style and in the second half, the ordered lyrical elegance of the Louis XVI, or Neoclassical style.

The mirror is from the region near Beaucaire, which is revealed in the quality of regional timber used whose strength facilitated the work of the sculptor who carved its applied decorative ornament that was later gilded.

The Residents in Arles, Beucaire and Tarascon supported the tradition of fine furniture making in their region, produced by local craftsmen.

The two main areas of production were Arles and Fourques.

Arlesian pieces had an emphasis on elaborate ornate carving, with curved lines and lavish floral detail on delicate, low relief, such as garlands of roses, flower buds and olive branches.

The style of Fourques meant furniture with deeply sculpted curves and undulating mouldings with little or no decorative motifs, and with less carved detail and ornamentation.

Anton Venoir Interiors also have a base in Europe. They import pieces that are shown off to perfection in their private showroom at Prahran, where you and your advisors can view and consider pieces from their collection for yours. In the grand palace of Carthage the guests at a banquet are gathered around Dido Queen of Carthage, who has her arm around Cupid, an indication the Trojan hero Aeneas on her right is holding her captive with his many charms.

Accompanied by Achate (being served wine) Aeneas is relating to Dido the story of the misfortunes of the city of Troy.

The “moral” of the story is that young women should not succumb to the advances and promises of ardent young men, because as it turns out Aeneas abandoned her.

The border of the tapestry is a garland of flowers and it’s signed “A Fleurs de Lys B ” – Royal factory of Aubusson. The factory produced both carpets and tapestries in France from the 14th century.

Their origin was with the weavers of Flanders, who sought refuge in the town of Aubusson in the late 1500’s.

During the 17th century Aubusson weavers were given “Royal Appointment” status.

Aubusson, and also the Gobelins workshops, which King Louis XIV (1638-1715) purchased in 1662, then took tapestry making to a high art form.

Among the many superb craftsmen one stood out, he was Andre Charles Boulle, born 1642 – 1732.  He effectively used timber inlaid with tortoiseshell and engraved brass to render superbly wrought designs. 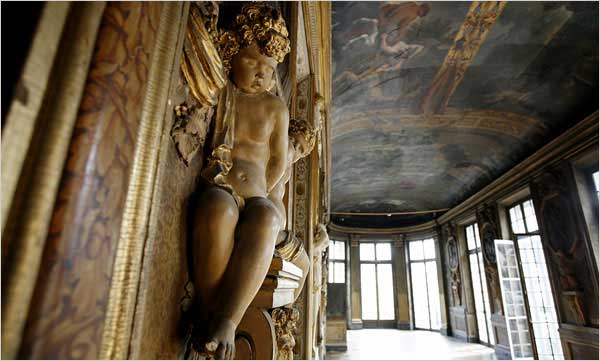 The seventeenth century in France was one of its most productive and pleasing in the evolution of design and the decorative arts.

Rooms in Paris’s most beautiful houses were planned with rooms arranged in a progression, allowing visitors time to reflect on the splendours of its interiors as they advanced from vestibule to the main Salon.

Along with mirror plate, gilding was not used as you may think only as a display of wealth, but also to very successfully reflect candlelight.

If you could afford to use gold then you did so lavishly, providing a high level of interest and an opportunity for your guests to gasp with delight.

In 1632 they came to attention when they built one of Paris’ most beautiful town houses, The Hotel Lambert for financier Jean Baptiste Lambert.

The works executed by Le Brun and his assistant Estache Le Sueur became a legend at once’ and heralded the arrival of civilised life indoors.

From then on elegance, grace and style of living became endemic in France.

It is this combination of grandeur and a civilised atmosphere that is characteristic of the French chateau or ‘hotel’ from that time onward.

The arrival of etiquette and structuring of society would be the next step in the chain with rules and guidelines established for polite society to follow, which also influenced architectural layouts.

The rules also applied to trades, who collaborated with each other by each performing a task based on a hierarchical status. The designer creator was at the top of the chain. The French craftsmen of the Eighteenth Century were: the Menuisier, an artisan who we would describe as a carpenter-joiner. His work was mostly accomplished in solid woods, producing seat furniture, bedsteads, stands, commodes and panelling (boiserie) etc

The Ébéniste was highly trained in the art of veneering figured and exotic timbers onto solid timber casework and cabinetwork. He was also an accomplished artist in marquetry work (an ébéniste-marqueteur).

Marquetry furniture had an ornamental pattern made by fitting together pieces of different coloured woods, shell, ivory, metal and so forth into a single sheet, which was then applied to the casework.

Ormolu, or gilded bronze mounts were also applied, and this format became so popular it dominated furniture made in France during the eighteenth century.

Fondeurs-ciseleurs worked in bronze, casting and chasing the magnificent mounts that are so characteristic of French furniture during the reign of the ancien regime

The Doreurs were the highly skilled gilders, who applied gold leaf to the bronze mounts made by the Fondeurs-ciseleurs.

There were numerous gilding processes that could be employed, however, the mercurial gilding produced at this time was truly superb, and unsurpassed in terms of its aesthetics and quality.

Its downside was that many of the workers died through incorrect handling of what we know now as an exceedingly dangerous substance.

It has since been banned except perhaps in museum conservation, where all precautions are taken to ensure the safety of the workers.

During the 18th century, tapestry became part of the decoration of walls in town, fixed onto battens. 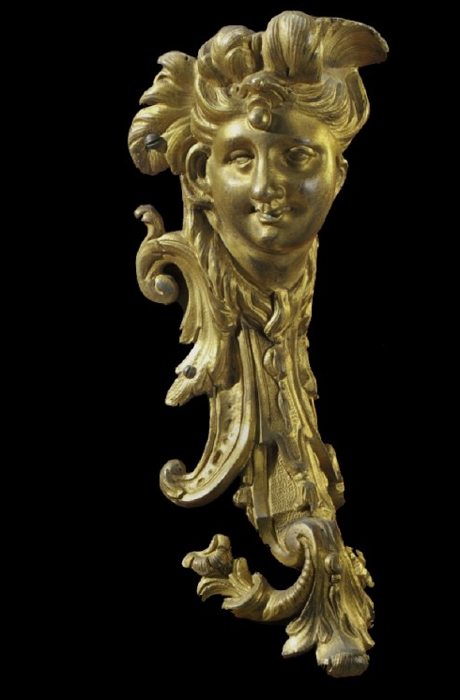 Often underneath them you would find disposed elegantly, an 18th century Louis XV Ormolu Mounted Kingwood and Bois Satine Commode.

Anton Venoir Interiors has one of these on offer, in the design style known as Louis XV or ‘Rococo’, which is characterized by its curvaceous bombe shape, capricious ‘cabriole’ legs and splendid applied ormolu mounts

After 1751 furniture in France was required to bear impressed stamp of the maker.

The Jurande des Menuisiers Ébénistes, who examined pieces and if satisfied with the quality impressed the initials J.M.E. on a piece, and only those made expressly for the Crown were exempt

The best interiors of the 18th century in the French neoclassical taste, achieved a splendid synthesis between fixed and movable decoration and furniture with the new style becoming popular after the Revolution. ‘

Although the classical doctrine flowed from Paris at the beginning of the nineteenth century it was still inspired by pre revolutionary ideals and models.

Emperor Napoleon went to great lengths to encourage the arts, considering luxury a necessary adjunct to a healthy economy. He could not bear to see tradesmen, who had attained such great heights of skill and craftsmanship under the ancien regime, suffer or have their skills lost forever. This stunning bureau plat came to Melbourne from the private collection at the Chateau de Cheverny in the Loire Valley. During World War II, the Mona Lisa, along with other famous works of art and significant pieces decorative art, were hidden in this Chateau. One of Anton Venoir Interiors treasured pieces, the bureau plat has a reversible top, which flips over to reveal the original tooled leather-writing surface so that it could act as a desk as well. 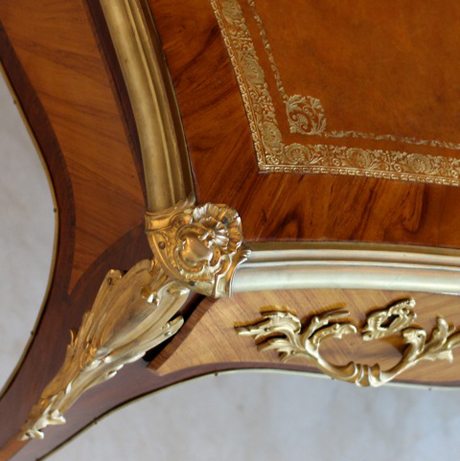 Manufactured between 1848-1860, the ormolu-banded top is inlaid overall with scrolling arabesques, above two shaped drawers, which are centrally fitted with Dionysian Satyr masks.

The top is raised on hipped cabriole legs, which are mounted with Bacchus’ masks within trailing vine foliage.

Many of the exceptional 19th century Decorative Art pieces,  were modeled after pieces by Master Ebeniste’s.

The French oak frame and interior, are typical of Parisian works of the 19th century. The French coined the phrase “vive la difference’, and incorporated it into the fabric of their homes.

If you embrace French antiques the exuberant spirit and the innate style of France and its people can be yours.

For lovers of fine furniture if you are in Melbourne or visiting from interstate or internationally, then Tony Venios of Anton Venoir Interiors is the man to see.

The magnificent collection of 17th, 18th and 19th Century French decorative arts he has assembled include many pieces headed for museums.

The works have been collected over the past 25 years.

Phone and make an appointment and Tony Venios will help you to start planning your new style, or to choose a special piece for your collection. The Academy Awards, held this year on the 29th of February, is cinema’s night of nights. Many months of painstaking preparation go towards the perfect look, and every year it doesn’t disappoint! So who wore it best and took out the award for best dressed on the 88th year of…