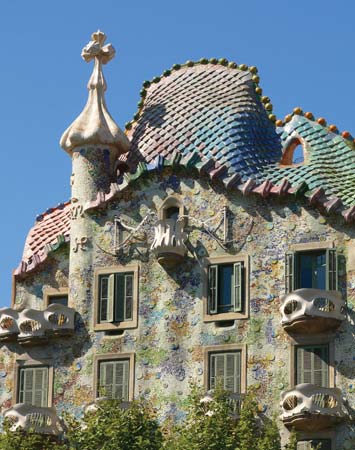 Jo Bayley our Fashion Editor has been travelling extensively in Spain and asked if I would write a post about the brilliance of their most celebrated architect Antoni Gaudi (1852-1926), whose work she and her husband Ross enjoyed encountering first hand recently when they were in Barcelona.

Antoni Gaudi was a man who exceeded the boundaries that other people impose. He asserted that virtually everything could be produced from brick and stone and today his controversial works still challenge the mind both structurally and aesthetically.

Gaudi’s Casa Batlló (1904-1906) broke all the bylaws of the city of Barcelona while becoming one of the ‘three best buildings of the year’.

Unlike his other projects, it was adapted from a conventional house built originally in 1877.

And, if we are talking of conventions, there is proof that occasionally Gaudi conformed to a point.

It was 1878 when Catalan architect and director at the Escola Tècnica Superior d’Arquitectura Elies Rogent singled out one of his architectural students Antoni Gaudi at graduation declaring, “Who knows if we have given this diploma to a nut or to a genius – time will tell” Gaudi noted ‘Art is beauty and beauty the radiance of truth – without which there is no art‘, new or otherwise” he said.

He was a “… tightrope walker on the line bridging art and science” according to Professor of Mechanical Engineering Adrian Bejan of Duke University, Durham.

Today such a concentration of his surviving works draw people to the city of Barcelona where he lived most of his life and where people respond to his ability to stir all the senses.

His works, also found in other parts of Spain, celebrate Gaudi’s life for the ingenuity of his creativity and his contribution to the development of architectural style during the nineteenth and twentieth centuries was important.

1880 – 1910 in France, Germany, the Low Countries, Austria, Scandinavia, Eastern Europe and Russia small groups of designers were busy allying their work to the simplicity and strength of various arts and crafts-type movements.

They were expressing their own sophisticated version of styles inspired by the “folk art” influence of their individual countries.

In architecture at Barcelona Gaudi was at this time going way beyond what many would have believed possible construction wise, especially when developing his version of design and style in architecture.

At the time the Arts and Crafts movement in England under the auspices of William Morris was a huge influence on numerous styles and an important aspect of Modernism.

Antoni Gaudi embraced many of the tenets of Modernism a contemporary term describing the diverse range of architectural and interior decorative styles created c1880 and c1940 on an international scale.

During Art Nouveau’s most successful and influential period at Paris 1896 – 1902, the natural world became a major stimulus for artists and designers with outlines and details, depicting the sinuosity of plant growth patterns important characteristics. The style emerged out of Paris and France to influence the world and Gaudi, albeit for only a small amount of time. It was a Parisian based art dealer Siegfrid ‘Samuel’ Bing who helped light the spark of Art Nouveau reflecting the newness of designs.

It featured entire rooms designed in the all new ‘art nouveau style’, which was characterised by fluid, curvaceous lines inspired by nature included tendrils and flower and leaf motifs that favoured asymmetry.

Naturally, lilies, irises and orchids were preferred, although any and every form, from palm fronds to seaweed offered potential for development into an animated pattern.

Insects and birds of colour and grace lent themselves to the same stylizing and refining process – dragonflies, peacocks, swallows, or creatures such as snakes or greyhounds.

Art Nouveau transposed well into surface and fixed decoration in architecture using metalwork and woodwork as well as into the world of jewellery, glass, ceramics and graphics. In Barcelona Antoni Gaudi was inspired by nature’s organic forms and the brilliance and richness of its colours.

He infused his own style with its freedom of form, organic unity, and layers of textures, while evoking the sinuous seductive brilliance of Art Nouveau’ and extending it into new realms.

There are seven properties in and around Barcelona that are among the best works of Antoni Gaudi. Casa Vicens (1883-1888) is an example of Mudéjar design, mixing Muslim and Christian together.

It was a residential project for a family involved in the ceramic trade, and it uses ceramic decorations profusely on the façade. It is exceedingly ‘exotic’ with influences of Islamic architecture and motifs, which is not surprising, as the invading Moors had infused their religion and culture with that of the Spanish culture centuries before.

La Pedrera (Casa Mila) one of Jo’s favourites is a World Heritage residential building (1984), which is sculpturally evocative, its undulating surfaces evoking rhythm and harmony in a design renowned for its irregularities.

Parc Guell (1900 – 1914) also a World Heritage site, is a place where his irregular fusion of nature, art and architecture come together has become a place of pilgrimage for all those who admire his brilliance.

Originally designed to be a private area surrounding sixty houses, Parc Guell was an important aspect of one of Gaudi’s failed developments that was taken over by the city and became a public park after his death in 1926. Now also a World Heritage site, it also hosts the Gaudi House Museum, established in the original show home for the site.

The Dragon gate (El Drac de Gaudi) at Finca Guell is a favourite, with its iron writing dragon manufactured by the locksmith’s Vallet i Piquer.

It was planned as one of three entrances to a vast estate where he was partially responsible for the design of the gardens and the so-called Pavelions Guell, which consisted of a stable, gatehouses and a ring for training horses. His Casa Calvet (1898-1900) sits easily among a ‘conventional’ styled row of apartment buildings, punctuating it with both Gothic and Baroque style inspired elements.

They add interest and reveal the forerunner to the sinuous shapes he would expand on as he gained in confidence and fame.

He began work on the Expiatory Temple of the Holy Family, the Sagrada Familia Church at Barcelona, now considered his masterpiece, in 1882.

He inherited the job from another architect who had founded its traditional Gothic Revial base and it was still unifinished when he died in 1926.

Gaudi lived on the site during the last twelve years of his life, and although many of his models of what he was endeavouring to achieve were destroyed in the Spanish Civil War, there are many who have studied his life’s work attempting to complete it as he would have wished.

Laid out in the shape of a Latin cross, 1500 singers can fit into its gallery and the church has five naves, not one like all others. Interpreting his intentions must be a challenge for those involved in its completion, for every door, column and sacred space he imagined is detailed with symbols reflecting the five continents Spain was colonising at the time. 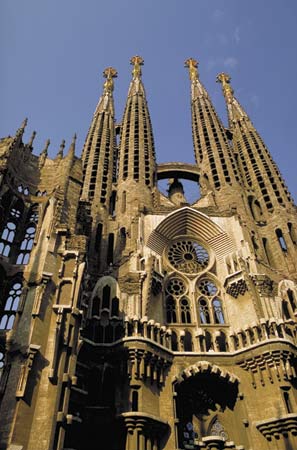 Virtue and the sacraments were integral ideas to Gaudi’s design as well as the apostles, religious personages in history and the church’s most important saints.

Today the great cathedral remains an epic endeavour, its four towering turrets and resplendent façade rising some hundreds of feet above downtown Barcelona.

Gaudi unprecedented juxtapositions of geomatric masses animated by patterned bricks, stone, ceramics and metalwork all respond to his ideas about how the chaos of nature and the word of God came together.

Consecrated by Pope Benedict XVI in 2010, when it was elevated to the status of a basilica, the Gaudi sacred structure remains unique, unlike any other such building in Christendom.

It is hoped it may be finished in time to celebrate the centenary of his death in 2026.

As the director of the Royal Gaudi Chair at the Polytechnical University of Catalonia in Barcelona has stated “Looking toward the future, the lesson of Gaudí is not to copy his solutions but rather to look at nature for inspiration … nature does not go out of fashion.”

Time has told the tale of Gaudi. Today most people, especially those in Barcelona, believe that he was a genius.

Just as a child’s literacy needs to be encouraged by reading aloud to them, so does their musical ear need to be soothed, or stimulated by the sound of music