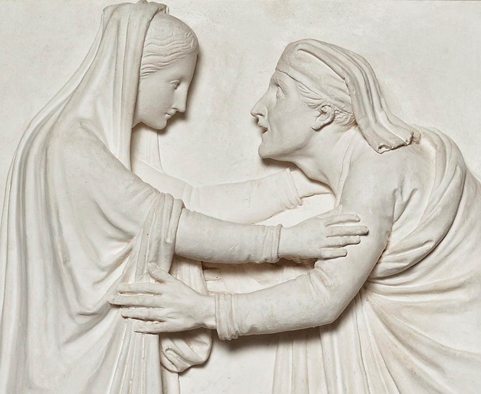 The brilliance of Venetian born sculptor Antonio Canova (1757-1822) is powerfully revealed, and will no doubt be scrutinized in some detail, through an extraordinary series of full-scale plaster models. They are on view in a unique specialized exhibition Antonio Canova: The Seven Last Works at the Metropolitan Museum of Art in New York (The Met) until April 27, 2014.

Organized by Peter Jonathan Bell, Assistant Curator, and Paola d’Agostino, formerly Senior Research Associate, both in the Department of European Sculpture and Decorative Arts at The Met, the models illustrate stories from the Old and New Testaments.

The sculptures were originally made in connection with a project for 32 reliefs, illustrating scenes from the Bible, that were to adorn the Tempio Canoviano, the church he built for his home town of Possagno, which later became his mausoleum. They still preserve the impression of the clay reliefs from which they were moulded.

Newly restored, the works are being lent for the first time to the United States by the Gallerie dell ‘Accademia at Venice.

Just one alone, the seventh plaster, The Creation of the World, comes from the Gipsoteca in Possagno, Canova’s hometown in the Veneto in Italy. It will be exhibited in place of the lost original.

His sculptural heritage is on show in Possagno in the house where he was born, built in 1836. It also contains a library and an archive with rooms devoted to learners and to the public.

It’s aim is all about being innovative, alive and being able to educate and transmit culture.

There is nothing quite like encountering a great work of sculpture, because it is art at the pinnacle of what is possible.

Antonio Canova who many believe inherited the mantle of Renaissance master sculptor Michelangelo, did not rigorously adhered to the severe simplicity of the antique. He infused all his works with a touch of timelessness that often defies description.

He refined ornamental detail, producing works that when encountered through his own streamlined stylistic approach, revealed their innate lyricism, beauty and grace. Apollo of the Belvedere, after Leochares Circa 120-140; copy of bronze original of ca. 350-325 BC. White marble, courtesy Vatican Museums, Vatican City

His Perseus with the Head of Medusa was commissioned by Count Jan and Countess Valeria Tarnowski (Poland) and was worked 1804-1806.

It’s a replica of his famed marble of Perseus in the Vatican, which had been first shown in 1801.

Its stance was based on the amazing statue of the Apollo of the Belvedere, also in the Vatican, which during the eighteenth century had become ‘the summit touched by Greek Art in giving form to ideal beauty’.

The Apollo Belvedere was discovered near Rome in the late fifteenth century, and is believed to be a second-century marble copy of a bronze original by the Greek sculptor Leochares.

When found it was immediately appreciated as a masterpiece.

The lower part of his right arm and the left hand were missing when discovered. They were restored by Giovanni Angelo Montorsoli (1506–63), a sculptor and pupil of the great Renaissance sculptor Michelangelo.

Canova produced his works during the age of romantics and revolutionaries, including the superb sculpture Endymion, now in the Duke of Cavendish’s gallery at Chatsworth House in England.

A painting exhibited at the Paris Salons in 1793 and 1814 Le Sommeil d’Endymion (The Sleep of Endymion) painted by Anne-Louis Girodet de Roussy-Trioson (1767-1824) is likely to have inspired this work. In Greek mythological prose Endymion was a handsome shepherd boy of Asia Minor, the earthly lover of the moon goddess Selene. Each night he was kissed to sleep by her.

Eventually she begged the god Zeus to grant Endymion eternal life because she wanted to be able to embrace him forever. Zeus granted her wish and Endymion lapsed into an eternal sleep.

The highly polished finish on Canova’s remarkable statue is believed to represent the reflected light of the moon goddess, Artemis.

It was in May 1819 that the 6th Duke of Devonshire, on his first trip to Rome, paid a visit to Antonio Canova in his studio.

Marveling at what he saw, he commissioned Canova to produce a marble statue, leaving both its size and subject for the sculptor to decide, while paying a deposit in advance.

The marble had been roughed out by 1822 and feeling confident Canova asked for a further £1,500 and thankfully completed the work before his death later that year.

The work arrived in London the following year causing a major stir and sensation when it was first put on display at Devonshire House.

The 6th Duke regarded Canova’s work as his greatest sculptural treasure, so he also commissioned a large bronze copy of it from English sculptor Francis Chantrey, which can be seen today on the South Lawn at Chatsworth.

Appointed by Pius VII Curator of Works of Art to the Vatican, Canova was called to Paris to model a statue of the French tyrant Napoleon Bonaparte in 1815.

When Napoleon was deposed by the Pope Antonio Canova was sent back to Paris to retrieve the works of art looted by Napoleon and his troops from Rome.

Antonio Canova tried to buy Giuseppe Sanmartino’s great work the Veiled Christ during a stay in Naples where legend has it he swore he would have given ten years of his life to have been the sculptor of the incomparable marble work.

This was high praise indeed from the sculptor, who was in his day lionized by all.

Located in the nave of the Sansevero Chapel, its considered one of the most impressive sculptures in the world Canova’s Cupid and Psyche depicts an episode from their ancient legend in which Cupid brings his dying love back to life with a kiss. It’s beauty of form, subject and modeling is a wonderful testimony to his genius.

Canova made two slightly different versions of this composition. The first was acquired by Napoleon’s brother-in-law and is the one now in the Musée du Louvre, Paris. The second, for which the Met Museum’s full-scale model was prepared, was made for Prince Nicholas Youssoupov and is now in The Hermitage Museum, Saint Petersburg. Tempio Canoviano, Possagno, Veneto, Italy was built to be the perfect example of neoclassical architecture, designed by Antonio Canova

Canova completed only seven of the models for the Tempio Canoviano prior to his death. Today they constitute the outstanding neoclassical sculptor’s last, most profoundly moving masterworks. 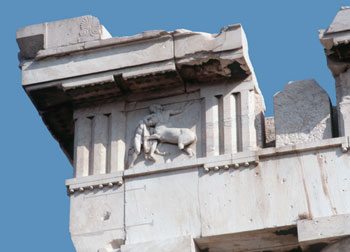 New technical study and art-historical research demonstrates that three series of Canova’s plaster reliefs for the metopes on the Tempio Canoviano survive.

The plain area known as metopes, was an aspect of the frieze on the three sides of the temples in ancient Greece using the Doric order.

They were was disposed between three decorative channels known as the triglyphs, the representation in stone of the regular intervals where the original beams on wooden temples, which held up the roof ended.

They honoured the timber tradition in temple building of the Doric Order, the earliest supportive column used in the evolution of their post and lintel style of architecture. Canova worked on his full-scale clay models between December 1821 and April 1822, completing four reliefs from the Book of Genesis and three from the Gospel of Luke.

He then produced plaster casts, a distinctive feature of Canova’s sculptural methodology that allowed him to review his compositions and transfer them into stone. Canova sent the plasters from Rome to Venice, where reputable sculptors carved them in Istrian stone.

However Canova died a few months later, following a trip to Possagno to check on the progress of work on the temple, leaving his final project incomplete.

Drawing inspiration from ancient sculpture and early Renaissance masters, the models are striking for the marked linearity of the figures, arranged in brilliantly syncopated compositions. Charged with intensity, the reliefs represent The Creation of the World, The Creation of Adam, Cain and Abel, The Sacrifice of Isaac, The Annunciation, The Visitation, and The Presentation of Christ in the Temple.