There are a few defining experiences and images I really respond to.

They include images of the ancient Greek God Apollo and his twin sister Artemis, the Pieta by Michaelangelo, Cupid and Pscyhe by Antonio Canova, poetry by Percy Byshe Shelley, and both early and new age classical music.

For those not familiar with Apollo in ancient Greek mythology he was the Greek God of archery, music, poetry, oracles, prophecy, medicine, knowledge and the sun.

My bust of him, which was given to me by a friend, graces the deep window embrasure nearby to my desk, where he inspires and motivates me daily.

Apollo is about the best we can all endeavour to be.

Fair quiet, have I found thee here,
And Innocence thy Sister dear!
Mistaken long, I sought you then
In busie Companies of Men.
Your sacred Plants, if here below,
Only among the Plants will grow.
Society is all but rude,
To this delicious Solitude:^ His twin sister Artemis was the Goddess of the Hunt and ‘moon mistress’.

From all the images we have of him he was represented as a handsome beardless athletic radiant youth, a favourite of the rest of the Gods on Mount Olympus. They represented harmony, order and reason. His father was Zeus, the most powerful of all the gods, his mother Leto a daughter of the Titans who ruled in ancient Greece’s golden age.

Apollo was one of the favoured of the twelve Olympian Gods and, all about light and truth.

Apollo enjoyed himself so much playing music that it became a joyous way of expressing thanks for a wonderful life.

He was meant to be about helping people to meet the challenges of their day.

Apollo is a very complex Greek God with all sorts of symbolic significance, cults and considerations, as well as having many finer points of detail about his persona and his association with other Gods. 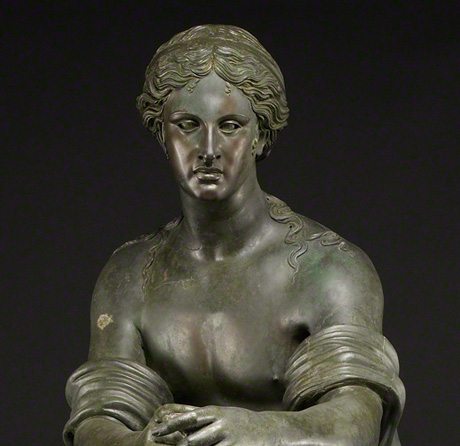 The bronze sculpture of him as Apollo Saettante (Archer), now in the Getty Museum in the Getty Centre, Los Angeles, is very moving. 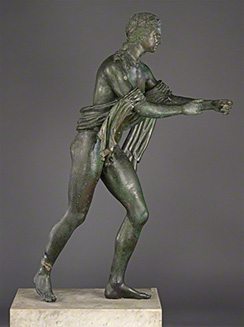 Perhaps my favourite image of Apollo is one that first captivated me when I led a tour overseas for the Academy of Design and Decorative Arts earlier this century.

It imparts the most wonderful feeling of calm and peace, especially when I view it at the beginning and end of each day as I wake my computer up and put it to sleep. This interestingly corresponds with his working day as well and the rest of the time he’s hidden by the light of other daily rituals and writing.

He’s located in a fountain sited in the garden at the Chatéau Versailles, where he is accompanied by tritons and dolphins.

His silhouette stands in high relief against a backdrop of splendid ancient trees.

A year after this photo was taken they were all but wiped out in a freak storm prompting a campaign to replant the over 10,000 trees destroyed.

At this stage they were still magnificent, their leaves in all shades of copper through red, mostly denuded, the last just clinging on towards the end of the autumn fall.

The stand of trees together form a cathedral like structure, arching majestically across a path that leads to the fountain, which is his launching pad. 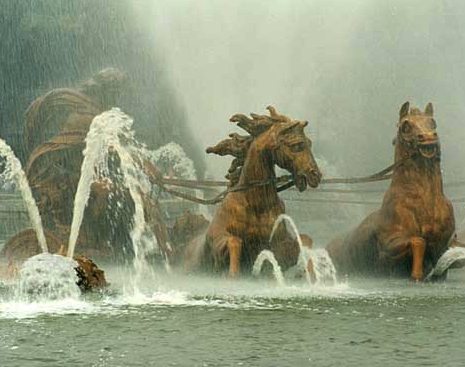 He is depicted sitting eagerly forward on the edge of the seat in his chariot, one hand holding onto its side as if to steady himself, while the other is gathering the reigns of his stellar horses.

He is about to take off so he can spend his day riding across the sky and watching down and over all of us below. 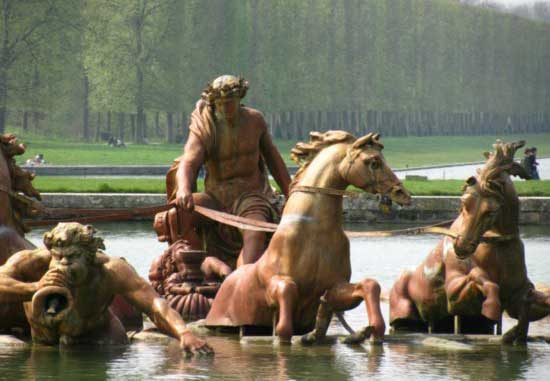 His mirror image appears reflected in the ever changing shimmering pool of water, whose surface takes on all the soft hues and sensuous shades of the sky.

As the colours slowly soften and fade slowly silence descends and then he merges into the shadows to rest until the dawning of the new day.

This magnificent sculptural group was created by sculptor Jean Baptiste Tubby for France’s King Louis XIV the Sun King, who aligned himself with Apollo, seeing himself as the leading light in his people’s lives. When we have run our passions’ heat
Love hither makes his best retreat
The gods, that mortal beauty chase
Still in a tree did end their race;

Throughout the Chatéau and its gardens there are many references and images of Apollo.

Another of the most famous groups was completed by Francois Girardon (1628-1715) most likely in a collaboration with Thomas Regnaudin.

Girardon was a master of the classical style and was highly approved of by the French Academy that established rules of execution for art. The three groups completed are now in the gardens, but originally they were in a grotto that was demolished.

The first group features Apollo with the nymphs of the sea who attend him at night.

One is holding a vase, which is a reference to Louis XIV’s ‘crossing of the Rhine’ an important victory for the French in 1674.

It also is meant to refer that King Louis XIV was indeed himself a young Apollo. The second group is a set of horses being tended by some of Apollo’s attendants, and the third is of his horses drinking after their journey of the day.

These have been designed to come together more like a contemporary painting like that perhaps of renowned French artist Francois Poussin (1594-1665). While all the images are drawn from classical antiquity, sculptors in ancient Greece didn’t arrange statues in group settings.

Apollo hunted Daphne so,
Only that she might laurel grow;
And Pan did after Syrinx speed
Not as a nymph, but for a reed^ The Romans loved to copy ancient Greek works of art.

They saw them as a pinnacle of achievement and were inspired by their beauty of form.

The famous original was rendered by one of ancient Greece’s most admired sculptors, Leochares somewhere between 350 and 325 BC or, four centuries before the Christ event.

It was described by Greek geographer Pausanias as having stood in the agora, or market place at Athens.

Found in the last few decades of the fifteenth century our antique reproduction of Apollo found his resting place in the garden courtyard of the Pope at the Vatican.

He became known as the Apollo Belvedere, because the courtyard where he was placed was designed to command a wonderful view out over Rome. Apollo Belvedere in the Summer Garden at Saint Petersburg

The highpoint of the statue’s popularity was in the eighteenth century when Superintendent of Roman antiquities at Florence,  German archaeologist Johann Joachim Winckelmann (1717-68) announced in 1763.

‘I place at the feet of this statue the idea of it that I have given, imitating those, who placed at the feet of the simulacra of the gods the wreaths that they could not place on their heads’.

And so this image became the summit touched by Greek art in giving form to ideal beauty.

The Apollo Belvedere perfectly fits into that category of the Golden Age when Greek art is considered to have reached classical ‘perfection’, which in reality means a high standard of excellence.

During the eighteenth and nineteenth centuries those who wished to view him queued for hours. However today he mostly stands alone, unobserved. But Why? Apollo Belvedere in the gardens of Pavlovsk at St Petersburg

Does the Apollo Belvedere stands alone today because we accept he’s not perfect?

In reality he’s become like one of us flawed and fragile.

He was brought down to size when there was all sorts of accusations about his homoerotic appeal in the prudish Victorian age. The criticism continued throughout the twentieth century, ultimately to a point of complete neglect until the noted English art historian Sir Kenneth Clark (1903–1983) observed ‘… for four hundred years after it was discovered the Apollo was the most admired piece of sculpture in the world’.

Now it seems it is only visiting coach parties and the fictional character Professor Robert Langdon who visits him, despite the Apollo Belvedere being one of the so-called ‘treasures’ Napoleon looted from the Vatican.

As Langdon pointed out as he hurried past Apollo in the da Vinci code…at some stage one of the Pope’s had the manhood removed from many a male statue, including that of Apollo. Montage of the Apollo Mission badges

Perhaps the original part of his personality was tagged and filed away somewhere in the Vatican Museum’s vastness?

Does that somehow make him now a symbol of male emasculation? Surely we are better than that.

Have we as human beings reached a point in our own development where we believe there is no such thing as perfection, at least this side of eternity?

Or is it that in viewing the Apollo’s perfection we feel uncomfortable because we realize that we have not yet reached that desirable point of inner growth that he represented?

American astronauts chose to reach for the stars by riding with Apollo to the heavenly realms. And some times it was rocky.

However they would all say I am sure, it was always inspiring. “We went to explore the Moon, and in fact discovered the Earth” 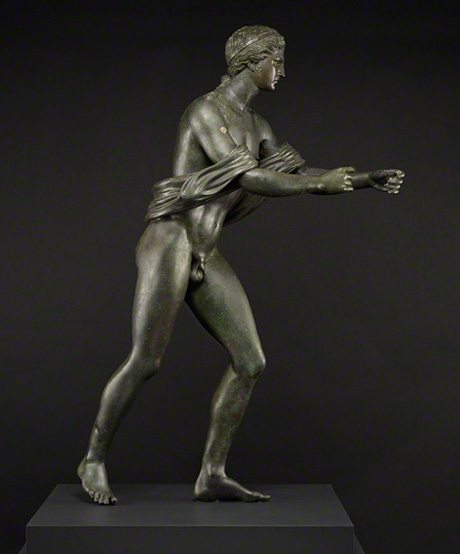 Apollo is today an important symbol of our cultural, spiritual and social growth.

Published by Mrs. Shelley, “Posthumous Poems”, 1824. I am reliably informed that there is a fair draft amongst the Shelley manuscripts held, for the greater good, at the Bodleian Library, Oxford University, England.

The sleepless Hours who watch me as I lie,
Curtained with star-inwoven tapestries
From the broad moonlight of the sky,
Fanning the busy dreams from my dim eyes,—
Waken me when their Mother, the gray Dawn,
Tells them that dreams and that the moon is gone.

Then I arise, and climbing Heaven’s blue dome,
I walk over the mountains and the waves,
Leaving my robe upon the ocean foam;
My footsteps pave the clouds with fire; the caves
Are filled with my bright presence, and the air
Leaves the green Earth to my embraces bare.

The sunbeams are my shafts, with which I kill
Deceit, that loves the night and fears the day;
All men who do or even imagine ill
Fly me, and from the glory of my ray
Good minds and open actions take new might,
Until diminished by the reign of Night.

I feed the clouds, the rainbows and the flowers
With their aethereal colours; the moon’s globe
And the pure stars in their eternal bowers
Are cinctured with my power as with a robe;
Whatever lamps on Earth or Heaven may shine
Are portions of one power, which is mine.

I stand at noon upon the peak of Heaven,
Then with unwilling steps I wander down
Into the clouds of the Atlantic even;
For grief that I depart they weep and frown:
What look is more delightful than the smile

With which I soothe them from the western isle?
I am the eye with which the Universe
Beholds itself and knows itself divine;
All harmony of instrument or verse,
All prophecy, all medicine is mine,
All light of art or nature;—to my song
Victory and praise in its own right belong.

The National Gallery of Victoria (NGV) in conjunction with Melbourne Food and Wine Festival will present a new exhibition Art of the Table, from February 5 2014