In September 1715 Philippe, Duc d’Orleans became Regent over the future King Louis XV, who was but five years of age. As soon as possible the Duke removed the French court and seat of government from Versailles to his residence at Paris, the Palais Royale.

He formed an alliance with England, Austria and the Netherlands and fought a successful war against Spain establishing conditions for a European peace

Parisian craftsmen were kept busy creating new and lavish surroundings for the Regent and his entourage and he set an example for that of a pleasure seeking lifestyle.

This manifested itself in the decoration of intimate and harmonious interiors of which the eighteenth century, particularly at France, was to excel. This style of interior reflected the joie de vivre, or joy of life and became the hallmark style favoured by a circle of intimate friends.

A new set of decorative motifs emerged and architectural decoration in polychrome marble and gilt bronze gave way to painted and gilded paneling, whose design also incorporated curves and clasps.

Two of the types of ornament that emerged are known as arabesque and grotesque. They both had grace and harmony.

Inspired by Roman Imperial ornamentation, what we know as arabesque and grotesque decorations had first come to light during the Renaissance in Italy.

They enjoyed a surge in popularity again in the early eighteenth century with new interpretations. Grotesque was an asymmetrical form of ornament that incorporated a series of extra design elements that allowed the design to step out and adapt to ever expanding surfaces such as vaulting.

Grotesque ornament had originally emerged from the discovery of wall paintings on vaulting in underground rooms, chiefly those on the walls of the what is known as the Domus Aurea, or Golden House, the lavish home of the former Emperor Nero at Rome.

Because the original form was found in what became known as grotte, the name popularly given to underground ancient ruins, which were reached by descending rickety ladders, they became known as ‘grotesques’. They were symmetrical, designed around a central axis and the grace and delicacy of their form was much admired. Although they originated in Roman imperial ornamentation, they had also previously appeared in the tradition of the Islamic moors at Spain, hence the name ‘arabesques’.

They were painted, inlaid, or carved in low relief and consisted of a symmetrical pattern in which plants, fruits, foliage and figures of men and animals, real or imaginary, were fantastically interlaced.

This style of ornamentation had an advantage in that the motifs themselves could be lifted out of context to stand alone.

It took a long time for archaeologists to understand that the Roman Emperor Nero’s Golden House (Domus Aurea) had originally been at ground level.

Great areas of Rome had been abandoned by the population after it being sacked by the Visigoths and many of its houses were quite literally covered by the sands of time.

Designer Claude Audran (1658 – 1734 and architect Jean Berain (1637-1711) both became masters of these two new ornamental styles and their variations. His designs had been transposed onto furniture by Louis XIV’s cabinetmaker Andre-Charles Boulle (1642-1732) who developed the technique of inlaying brass into veneers made of such exotic materials as tortoiseshell.

He also designed the jewelled wedding clothes and private apartments of Philippe d’Orleans when he married his cousin, the youngest legitimized daughter of Louis XIV Francoise-Marie de Bourbon in 1692.

Many of his delicate designs early in the eighteenth century preview the frivolity of the new emerging assymmetrical Rococo style.

They were mostly produced by his son, Jean Berain the Younger (1678-1726) who had inherited his father’s position at court.

His style was a continuation of his father, who  had become known as an ‘oracle of taste’. As a designer Claude Audran (1658-1734) who was born into a French family of artists, was very flexible. He produced everything from designs on walls to designs on musical instruments, like harpsichords.

Audran also designed patterns for embroidery for church vestments and stained glass windows and his work was extremely popular in Sweden. Singeries became an extremely popular subject for Arabesques at this time, with monkeys dressed in human clothing, aping the actions of men eg. hunting, smoking or dancing. This detail is of a truly delightful wall covering in the Chateau Chantilly, France.

Christopher Huet, Claude Audran and Jean Berain all produced ‘singeries’ for wall coverings and they were also painted on porcelain and faience. 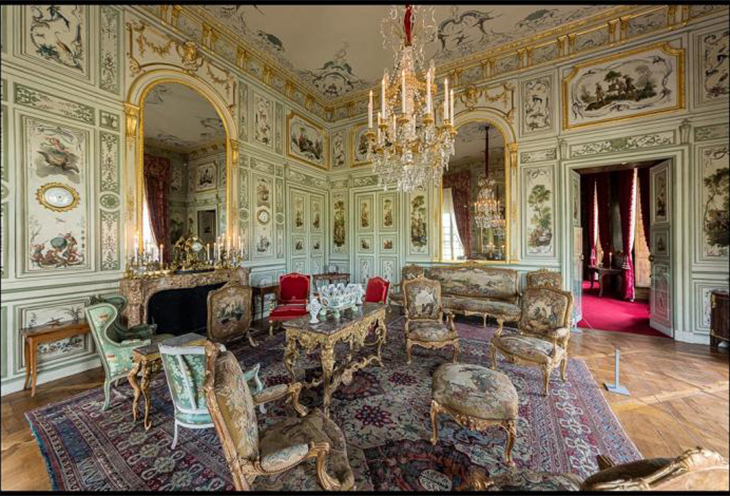 Christopher Huet (d1759) executed exquisite singeries for the Marquise de Pompadour for the interiors at Château de Champs-sur-Marne, which are still in place.

Monkeys had figured in European art since the Middle ages, but the vogue for their use in interior decoration began late in the seventeenth century reaching the height of popularity during the first half of the eighteenth century, especially when they became associated with the use of the fanciful style Chinoiserie. Watteau was the most acclaimed painter of the early years of the century and developed a genre known as the Fete Galante.

It was a highly personal style, one in which the sophisticated pleasures of the beau monde were rendered poetically and his vision and preference for worldly elegance was widely emulated.

Watteau also created a lighter style of grotesque decoration, which he also adapted for tapestry design. His Fete Galante scenes served as models for objects of beauty and desire such as statuettes being made at the new French porcelain factory at Vincennes.

His delicate palette of colours and sensitivity to a subject was much admired during his short lifetime and would have a great influence on form and stylistic change well into the future. The cup and saucer is from a service is similar to one offered at auction in London in 1770 and is now in the V & A Museum at London.

It was described as ‘a very curious and matchless tea and coffee equipage, crimson and gold, most inimitably enamelled in figures, from the designs of Watteau’.

The figure subjects are not directly copied from paintings by Jean-Antoine Watteau (1684-1721), they are certainly inspired by his work.

In Series One, Episode 5 of the Netflix TV Series Medici: Masters of Florence, we find ourselves in Venice with Cosimo de ‘Medici, recently exiled from Florence