The best and shortest road towards knowledge of truth [is] nature* In ancient Egypt their agricultural society, at first, was structured around a King, who embodied the Egyptian belief that their lives were being divinely guided and nurtured. During the ‘Old Kingdom’ in the 3rd millennium before the Christ Event, he emerged as a ‘living god’, one who ruled absolutely and entitled to the wealth and services of his subjects. King Djoser, first king of the Third Dynasty of the Old Kingdom, established his court at Saquarra where during his reign his architect Imhotep conceived a new architectural form, that of a (step) pyramid.

This is when what we know now as Egyptian art also emerged, with the creation of images and forms that would endure through the ages. Sculptors created lifesize statuary with great sensitivity, establishing a canon of work that would, with innovation and variation, define their culture for over three thousand years. Some of these gave rise to the development of a unique form of writing, Egyptian hieroglyphs. The society of the Old Kingdom, in the eyes of post Old Kingdom Egyptians, was its classical period and a highpoint of their culture. Subsequently its forms and iconography remained in use throughout Pharaonic Egypt from its early beginnings until 30BC when it finally fell to the Roman Empire, becoming a Roman province.

Some 180 examples of the very earliest works of Egyptian art—created in the Predynastic and Early Dynastic periods, from around 4400 B.C.– 2649 B.C. (the end of Dynasty 2) from throughout Egypt are currently being featured in the exhibition The Dawn of Egyptian Art, that opened on April 10, 2012, at The Metropolitan Museum of Art. There are many outstanding examples of sculpture, painting, and reliefs from the collections of the Metropolitan and 11 other museums in the United States and Europe, which have been gathered together for this presentation. The Metropolitan Museum of Art at New York has the largest collection of Egyptian art, architecture and artifacts outside Egypt. This show will illustrate the origins and early development of ancient Egyptian art. 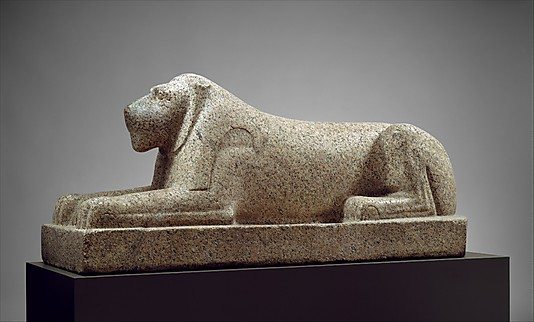 Works of early Egyptian art capture the evolving world-view of the early Egyptians, striking images of people, animals, and landscapes. Animals occur frequently in early Egyptian art, and the exhibition is particularly rich in images of hippos and crocodiles, turtles, and fish; antelopes, cattle, elephants, baboons, lions, and canids (jackals and dogs); ostriches, ducks, and falcons; and scorpions and snakes. Probably because of certain attributions or characteristics, some animals grew in importance during this period, and they carried forward as symbols in later Egyptian culture, while others disappeared. The imposing recumbant lion figure, sculpted from granite, would have once guarded the entrance to a pyramid-age sanctuary. As the most powerful predator of the steppe bordering the Nile valley, the lion became a symbol for royalty. The ancient Egyptians established a civilisation that was envied and admired for 3000 years. During the Predynastic and Early Dynastic Periods (ca. 4000–2650 B.C.), people living in the Nile Valley began recording their beliefs through paintings, sculptures, and reliefs, which were made for their shrines and tombs. They cultivated their fields, learned how to store crops against times of famine and to gauge the rhythm of the river Nile, central to both the organization and political unification of their country.

The Nile flowed from south to north bringing life to a dry parched land. The energy of its waters rejuvenated and fertilised the earth from July to September the season of akhet, or flooding. The Nile River inundated the land depositing silt and preparing it for the season of peret, that of planting and growth. This happened from November to March and was followed by the season of shemu, the ripening of the grains and the harvest, which took place in April, May and June.

“Visitors who are familiar with the appearance of hieroglyphs and other later Egyptian artistic expressions will be surprised by these early works, which are very different in scale, style, and subject matter,” commented exhibition organizer Diana Craig Patch. “Yet, if we look closely at this early art, we can already detect the origins of certain signs in later hieroglyphic writing and of some symbols and concepts associated with ancient Egyptian rulers and the gods. The Predynastic and Early Dynastic period was a time of great creativity, before the ‘typically Egyptian’ forms became codified. Yet, because of the rarity of these objects and lack of inscriptions, we cannot always explain what they meant to the early Egyptians.”

The ancient Egyptian’s leisure activities included wrestling, fishing, athletics, acrobatics, fencing, archery, board games, ball games, bull fighting and playing with their pets. Depictions of humans on show are of two types: realistic figurines in bone or ivory that depict the entire human body; and abstracted forms in clay, mud, ivory, or stone in which the figures often lack arms, have missing or poorly formed legs, or have beak-like faces that emphasize the nose. All figurines have attributes that identify their gender clearly. Evidence indicates that some figurines were made to represent a specific activity and that their position in tombs was not arbitrary.

The early Egyptians success depended on the ancient people’s ability to adapt to the ever-changing conditions of the Nile River valley. Ancient Egyptians were mostly vegetarian with a reasonably healthy diet that included beer, a thick lumpy beverage filtered through a strainer. Resultant drunkenness was common with some early texts warning male students to stay away from beer halls, as well as women of ill repute. Sounds familiar. Whatever early man’s beliefs entailed it is certainly clear from evidence documented by archaeologists, that from the earliest recorded time ‘man must have been comforted to know there were substances on earth …to which he could turn for help to influence his physical and spiritual environment’ 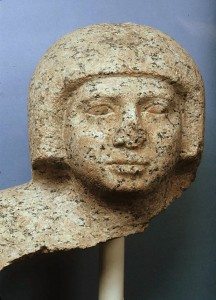 The exhibition will be accompanied by a lavishly illustrated catalogue by the exhibition’s curator, with essays by Renée Friedman, Ann Macy Roth, Marianne Eaton-Krauss, and David P. Silverman.

The exhibition is organized at the Metropolitan by Diana Craig Patch, Associate Curator, Department of Egyptian Art. Exhibition design is by Michael Lapthorn, Exhibition Design Manager; graphics are by Norie Morimoto, Graphic Designer; and lighting is by Clint Ross Coller and Rich Lichte, Senior Design Managers, all of the Museum’s Design Department.

In conjunction with the exhibition, a variety of education programs will be scheduled. These will include lectures and exhibition tours for adult visitors, and three workshops—one for teachers, one for families with young children, and an additional family workshop for people with learning and cognitive disabilities.

A Sunday at the Met program on May 13 will focus on the topic of the ritual hunt in the Predynastic Period, with presentations by Diana Craig Patch, Associate Curator, Department of Egyptian Art, The Metropolitan Museum of Art; Renée Friedman, Director of the Hierakonpolis Expedition; and Stan Hendrickx, a noted scholar of the Predynastic Period.

Wow, I can’t believe how fast the time is flying by in 2014! Here we are again, coming into one of my favourite weeks of the year “Dream Week”. Here at The Culture Concept one of our chosen charities is Look Good Feel Better. As many of you may know…