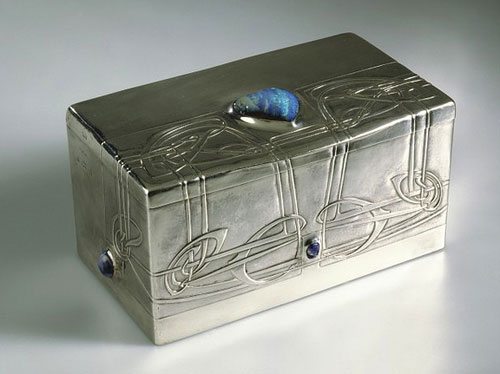 Archibald Knox and Liberty of London are names inextricably linked, especially when we consider the up swell of indigenous British design at the beginning of the twentieth century.  “Advanced” design (as it was referred to at that time – we call it Modernism), stemming from the historical revivalist principles of William Morris, the pre-Raphaelite Brotherhood and the Aesthetic Movement, was starting to appeal to a wider audience. Arts and Crafts Movement designers and the Guilds were happy to provide for them. Into the centre of this expansion stepped Arthur Lasenby Liberty, a far-sighted and hard-headed businessman with a flair for sniffing out new artistic trends and capitalising upon them. By 1875 his emporium on London’s Regent Street was already brimming with Oriental metalwork and lacquer, exotic Eastern fabrics and “mediaeval” German pewterware. 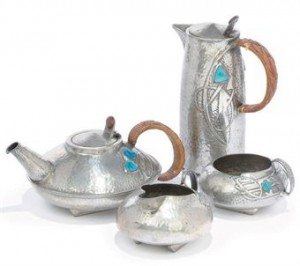 He was certain he could do better by manufacturing and designing at home, and cast around for suitable designers. In his net he caught Archibald Knox, and a great partnership was born, albeit one rarely acknowledged publicly. Business was business for Liberty, and his designers were not expected to have a profile themselves. This, however, suited Knox – a man of extreme self-effacement and with a dislike of public attention. Knox was a Manxman, born in 1864. His life on the Isle of Man, a stronghold of Celtic lore, was to have the most profound effect on his life as a designer. Time, an enemy for us all by Archibald Knox

As a child, and a budding artist, Archibald Knox was powerfully impressed by the illustrative aspect of Celtic culture: the fine carved stone crosses scattered over the island; the intricate “lacing” and colour of illuminated manuscripts such as Ireland’s ninth century Book of Kells; the entrelac sinuous twistings of ancient Celtic metalwork like the famous Tara Brooch and the Ardagh Chalice, viewed on visits to Dublin. 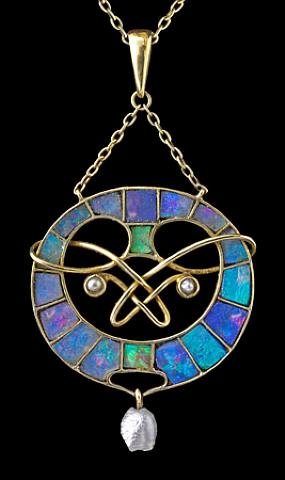 He was a solitary boy, but made friends with an artistic circle of much older local painters. At Douglas Grammar School, he was introduced to archaeology and the study of earlier cultures. Picking up sea-tumbled semi-precious stones on local beaches – jasper, greenstone, coral – led to his later inspiration to set these simple stones into his silverwork.

Despite its small size, the Isle of Man was fortunate to have a vigorous and “venturesomely modern” Art School in Douglas. Archibald attended from 1878, when he was 14, until 1884. He specialised in the study of the “Design of Historic Ornament”, and passed with such distinction that he remained as an Art Master until 1888.

For the next 11 years, Knox occupied himself with illustrations for articles, many written by himself, which expanded knowledge of the Isle of Man’s history and its Celtic ornament. He sketched and painted watercolour landscapes prolifically, although these charming paintings were for his eyes only. In an interesting early collaboration, Knox worked with Baillie-Scott, an English designer recently moved to Douglas, who was to gain a reputation as a major arts and crafts architect and furniture designer. This contact linked Knox to a much wider exposure to European design and, perhaps as a direct result, in 1897 he accepted a teaching post at Redhill School of Art in Surrey, on the mainland. In the same year that he moved from his island home, Knox also began designing for the Silver Studio, run by the young Rex Silver in Hammersmith, West London. From the Silver Studio, Knox’s first designs for Cymric silverware were sold to Liberty’s.

By 1900, Knox had become the principal designer for all of  Liberty’s “Celtic Revival” metalwork and jewellery ranges. The Cymric line was for silver, and the Tudric stamp was reserved for pewter pieces, but both metals were treated by Knox in a similar manner. His characteristic knotted, entrelac, soft-edged designs (often embellished with enamels or polished stones) became one of Liberty’s mainstays. The fluidity and daring of some of these marvellous objects produces a strong, almost visceral response. These are not designs of the intellect, despite their careful and controlled planning.

It is the soul which responds, recognising the fundamental connection with Nature potently expressed through Knox’s stylised designs. His pieces become instantly recognisable after only a short association. 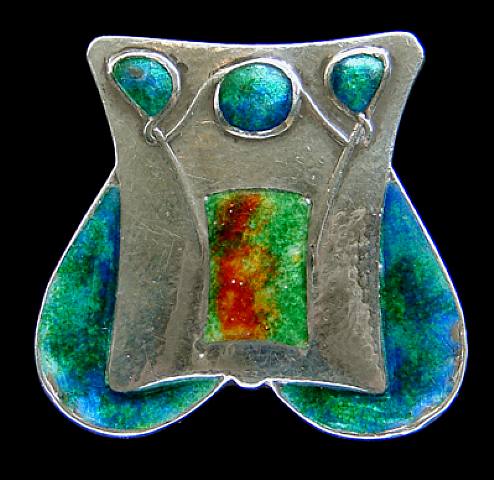 By 1909 it seemed that the prevailing Liberty style was on the wane, since cheap copies by other firms were detracting from its initial impact. In any case, Knox was by this time teaching full-time at Kingston School of Art. He resigned abruptly in 1912 after criticism of his teaching methods. His life then became a rather sad series of displacements – from Philadelphia, to other parts of Pennsylvania, and to New York, searching for suitable employment and never really settling.

The years of the Great War saw him back in his beloved Isle of Man, working as a censor in an Alien Detention Centre. He returned to his old school in Douglas to teach in 1920. Painting and travel to Italy consumed his spare time until his sudden death in 1933 at the age of 69. His tombstone, naturally, is of his own design – a glorious interweaving of flowing lines around a Celtic cross in the cemetery at Braddon.