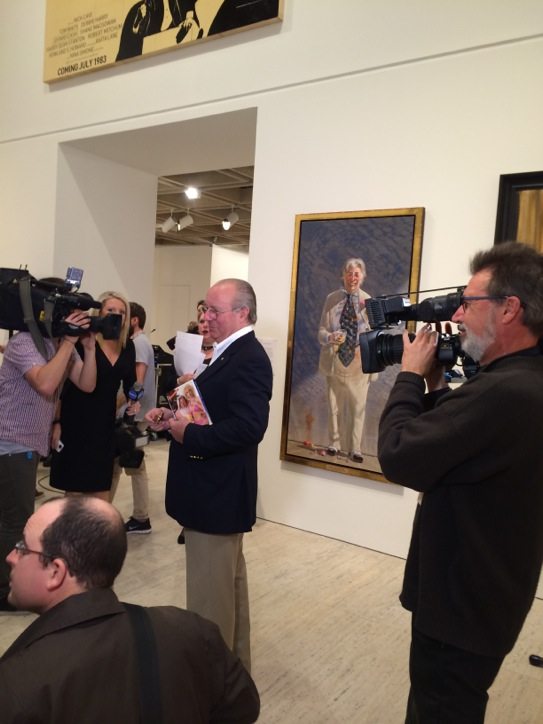 It was a media frenzy at the Art Gallery of N.S.W when the 2014 winner of the Packing Room prize was announced.

Lets just say the subject is more than used to a little journalistic coverage!

“After years of requesting a portrait sitting with Sir Leslie Colin Patterson KCB OA, a suitable gratuity was transacted through his long time manager, Barry Humphries. Access was granted” said Storrier. And oh to be a fly on the wall in those sittings!

Storrier went on to say “there were subtle technical difficulties in arranging the deportment of Sir Les’s trousers.

His pretty young assistant often strutted into the room and I would have to rearrange the lights so his enthusiasm in her presence was not as pronounced.”

Sir Les mused that he would love the portrait to have the same effect as another masterpiece, that his anatomically correct physic would follow the viewer “like the eyes of the Mona Lisa”. Who better than to capture this salubrious subject but another of Australia’s national treasures Tim Storrier. Famous for his moody Australian landscapes, Storrier was born in Sydney in 1949 and studied at the National Art School.

He was awarded an Order of Australia in 1994 for services to art.

This is not the first time he has entered the Archibald prize.

He won for his faceless self portrait in 2012, but it is the first time he has won the Packing Room prize.

The Packing Room prize is awarded by the Gallery staff.

Head storeman Steve Peters has been voting for 23 years and it’s his 32nd Archibald Prize.

This year there were 884 Archibald entries, and viewing the other entrants the decision would have been a tough one.

Although, I do think Sir Les hold a place in the hearts and minds of many Australians, and was a fine choice!

On hearing of the win, I’m sure Patterson will celebrate in true elder stateman fashion, light up a ciggie, crack open a tinnie and be up for a “bonzza” night! Finalists for the 2014 Archibald, Wynne and Sulman Prizes were also announced today and published on the Art Gallery of NSW’s website.

The Archibald is a portrait painting prize, the Wynne awarded to the best landscape painting, while the Sulman Prize is given to the best subject painting, genre painting or mural project in oil, acrylic, watercolour or mixed media.

Here’s to our Australian icons. Long may they be portrayed in such magnificent style!