How great is artist, raconteur, amateur poet and passionate Australian Tim Storrier’s portrait of himself, which has won the Archibald Prize for 2012. Humble, full of humour and pathos, that interior universe to which man is drawn, attracted by its complexities and contradictions. It certainly implies that something more than just simple emotion is going on. What a delight. 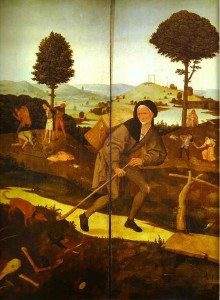 The inspiration apparently for this delicious image was a work by Dutch painter Hieronymus Bosch (1450 – 1518) called The Wayfarer, which was painted in 1510.

Bosch’s figure is believed to be choosing a pathway between virtue or vice,  or possibly might be the prodigal son returning home after years in exile from his family. ‘It also has other references, I believe, but they are rather clouded in biblical history and time’ says Storrier.

The Archibald Prize, since its early beginnings has always, and continually aroused controversy as it recorded the changing face of Australian society. Numerous legal battles and lots of delicious debate have focused on the evolving definitions and perceptions about portraiture, and what it is meant to represent. Is it only meant to be the representation of an identifiable individual? How do the judges assess it? If we know the person was a General, King or Queen will that impact on our view or understanding of it.

Is it a portraits function really to show a person as themself, at their most characteristic? If the latter, then Tim Storrier based on this captivating image must be a marvellous man to know. 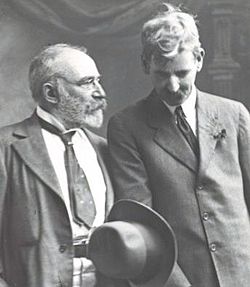 J.F. Archibald with the poet Henry Lawson and he had a great influence on Australian politics, literature and art

The Archibald Prize has grown since its inception in 1921, following a bequest from J.F. Archibald editor of The Bulletin to become one of the most popular annual art exhibitions in Australia and the Packing Room Prize established in 1991 and awarded as all the 41 finalists are unveiled, is also highly sought after by all the artists. There are tons of celebrity events surrounding its announcement and personal insights and interviews with the artist conducted by all of Australia’s most famous media presenters. 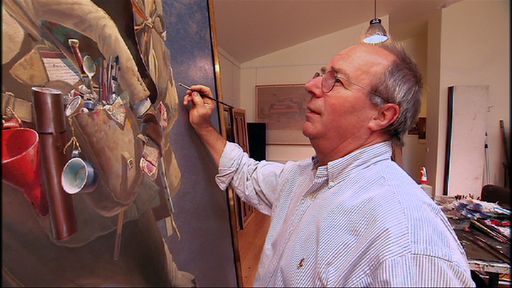 Born in Sydney in 1949, Tim Storrier studied at the National Art School in East Sydney and now lives and works in the countryside at Bathurst. He is renowned for his mysterious, poignant landscapes that capture the melancholy vastness of the Australian outback. He has exhibited all over Australia and in Japan, Hong Kong, Singapore, New York and London.

Storrier won the Sulman Prize in 1968 at age 19 – the youngest artist ever to received the prestigious award – and again in 1984. His work has been collected by all major Australian art museums and is included in the collection of the Metropolitan Museum of Art in New York, the National Gallery of Australia and the Art Gallery of New South Wales among others.

In 1994, he was awarded an Order of Australia (AM) for services to art.

The works will all go on regional tour. 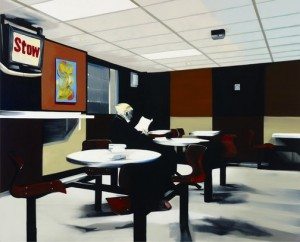 This year is the 91st year of the Archibald Prize at the Art Gallery of NSW.

The Archibald and Wynne prizes are judged by the Trustees of the Art Gallery of New South Wales.

The judge for the Sulman Prize was Susan Norrie. 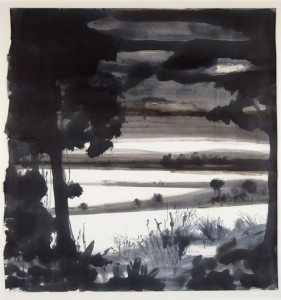 What is culture and what is democracy in action? Culture is created by each and everyone of us and defines who we are as a nation. It embodies the values, traditions and beliefs we all share and is enriched by our interaction with people from other cultures around the world….