South Australian businessman and devoted collector of antiques and fine arts David J K Roche AM (1930 – 2013) formed a Foundation to display his collection, a legacy he left to the Australian nation.

The collection’s greatest strength is in the quality of its objects and furniture, whether they are very simple and humble or decidedly grand.

Art from the Hearth will be a unique exhibition held by the David Roche Foundation at their Viewing Gallery on Melbourne Street, Adelaide from 29th April – 16th October 2014, displaying his kitchen collectables. For the visitor it will mean having a great deal of fun.

Recently I was privileged to have a trip to Adelaide to view the kitchen all piled high with its wonderful wares in situ. What a place of pure delight it was, put together with a great deal of love and attention to detail. Many of the objects are exceedingly rare.

In Europe and England, and then in America and Australia for centuries, fireplaces were at the heart of any home. They were used as a cooking centre and the main source for heat. As such they symbolized both security and well-being.

During the Victorian age in the nineteenth century, with the great wealth generated by the Industrial Revolution, for the first time in the history of the house it became the vogue to seem not grander, but poorer, simpler and less sophisticated than you really were. In so doing you placed yourself, perversely, at the height of fashion. The origin of much of our way of life in Australia was at first an aspect of an English ongoing tradition, one that made a unique contribution to the development of our own culture and the life we either enjoy or aspire to today.

A cottage orneé was an acknowledged place of tranquillity, one far removed from most people’s usual daily cares.

It was also a place where you could go to and pretend that you were something you were not, and that your tastes were simple and rustic, when in fact they were very sophisticated indeed.

David Roche understood this when he formed one aspect of his amazing collection, displayed with great dash in his kitchen.

He fully embraced the idea of collecting unique and special objects for your very own ‘cottage orneé’ as revealed by this earthenware timber-framed house, oozing the charm and appeal of Tudor style ‘black and white’ cottages in England, for which there was a great demand c 1820.

David Roche turned his kitchen into a place of great enchantment and wonderment, putting in place a collection of ‘kitchen memorabilia’ that are sometimes aesthetically beautiful, occasionally mechanical and often amusingly whimsical. At Adelaide his ‘hearth’ was the hub of his home, just as it had been during his childhood growing up during World War II, the late 1940’s and 1950’s, when butcher shops like this one were all the rage.

This wondrous delight is an astonishing creation, which resembles a framed stage set and comes replete with sawdust on the floor and butcher blocks for the butcher to cut up and trim the meat on the spot.

The Victorian butcher and his staff are standing ready to serve among an astonishing array of meat products.

The attention to detail is indeed admirable and it is entirely impossible for anyone not to be charmed both by its rarity and the subject.

David Roche and I were of the same ‘Lost Generation’  and so I remember such Butcher shops well. I found the whole ambiance of his delightful kitchen very nurturing, despite it being slightly ‘over the top’. On the fabulous country style dresser and the walls a great deal of amusement abounds in an eclectic array of great charm. Every inch is covered with framed naive works of art, all either delightfully domestic or countrified scenes. There are also a plethora of pictures of folk, fowl, fish, foxes and friends, as well as plenty of pooches, plates and more than a parcel of pigeons. Among the objects in the dresser is a painted puzzle mug containing a ‘hidden donkey’ to search for. The puzzle jug, and subsequent puzzle mug were an interesting phenomenon of their day that many collectors of pottery enjoy today.

The jugs were first made during the seventeenth century and had a pierced neck that made it impossible to pour the drink or to drink the contents unless you covered the hole with your finger.

Some also developed with two or three spouts, and often they were embellished with a rhyming poem

Fill me with ale, wine or water
Any of the three, it makes no matter
And drink me dry if you be willing
In doing so you’ll win a shilling

They were first made for taverns, inns and public houses as a delightfully eccentric challenge. They were an early form of ‘marketing tool’.

Having fun and enjoying yourself was a concept that sold more ale. 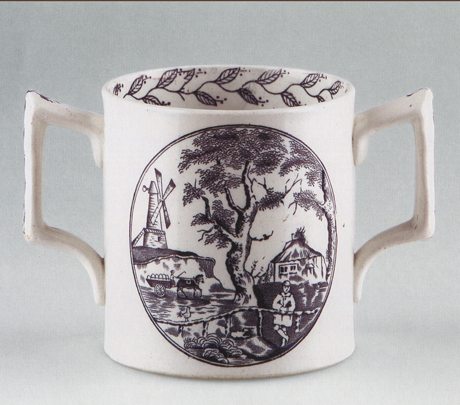 The most desirable puzzle mugs that emerged were hand painted with underglaze blue, that is until transfer printing took over after 1800.

The idea was that something was hidden in the painted scene.

The trick is that the image usually appears in the ‘white space’, rather than being part of the drawing.

The ‘cow’ money box of cast iron c1860 is decidedly cute. By depressing a lever near the front right leg of the cow, the right leg kicks up and knocks the man milking the cow off his stool, upsetting the pail of milk. It is sitting happily among many other extraordinary novelties and toys. The development of high quality earthenwares during the second half of the eighteenth century provided exciting opportunities for new wares to be developed, including Creamware and Pearlware. They both became the basis for the development of many popular ceramic bodies from about 1780 – 1840.

The Staffordshire potteries in particular produced a plethora of ceramic country objects. There is one delightful cow with her calf, who has the kitchen cat curled up on her head!

There are all sorts of delightful figurines, of which the collection has hundreds,

Many of these reveal portraits of the most popular personages of their day, including military leaders such as Admiral Nelson, or the Duke of Wellington.

There is one in David Roche’s collection only recently identified as being Captain James Cook, who discovered the east coast of Australia.

There are a fabulous collection of jugs as well, including those that have been thrown or moulded and then decorated in a variety of numerous ways; they are prettily and perfectly painted both under and over the glaze, transfer printed or have moulded and applied sculptural relief of varying depths (dependant on dates produced). They generally hold the brandy sauce, the cranberry sauce, the plum sauce or, thick pouring cream for the Xmas pudding, so they are useful all year long, as well as many of them being exceedingly pretty.

There are many different ways of identifying the factory where a jug was made. The body of the ware, the foot rim, how it has been shaped and finished and what the marks on the foot, if any, mean is generally a good place to start.

The colour of the body, the glaze and the way the decoration has been applied is also pertinent. Some factories released certain designs on specific dates that are recorded, so many can be identified in this way as well.

Sometimes it is hard to identify, where they were made. Like today, businesses come and go and so did many early ceramic factories. As well, records have also been lost over the centuries for many different reasons. The ceramic bodies were also made into all sorts of fabulous and functional tureens in many great shapes and sizes to hold all manner of foodstuffs. David has a fine selection.

They come in the shapes of country produce, from a cauliflower to a cabbage as well as cockerels and hens.

This small select gallery and its treasures is well worth a trip to see.

Adelaide is such a delightful city, easy to negotiate and with lots to see.

The South Australian Art Gallery has a tremendous William Morris Collection to see, also popular furnishings during the ‘cottage ornée’ era. Not to mention the stunning array of exhibitions coming soon. The Art From the Hearth show held at the David Roche Foundation Gallery should prove an interesting diversion for both locals and visitors during the winter season in Adelaide, 2014.

There are not too many art inspired ‘kitchen shows’ around.

From toys, money boxes and naïve items to the finest ceramics, from the country paintings and wonderful furnishing items, David Roche loved them all and it shows.

I was entirely enchanted, and I am sure that you will be too.

Friday to Monday: Closed
Tuesday to Thursday: 10am to 3pm
Entry by donation ($2)