The ancient Roman orator Cicero [106 BC -43 BC] believed that  ‘to style the presence of guests at a dinner table’ lay at the heart of civilised life ‘because it implied a community of enjoyment, a convivium, or ‘living together’.

Roman Emperor Nero (37 – 68) certainly embraced the art of fine living. It is reputed that when he entered his newly completed Domus Aurea (or Golden House), built in 64 AD he proclaimed, as he gazed upon its many splendours, words to the effect… ah, now at last I can live as a human being.

In its essence this idea, which has come down to us from antiquity, has always been at the heart of many of our ideas shaping traditions of hospitality and social and cultural development over the centuries.

Sharing a meal together today, whether around a campfire on a starry night out in the Australian Bush with the smell of the eucalyptus assaulting your senses or, seated at a beautiful mahogany antique table groaning with silver and crystal with a string quartet playing a tune by Mozart, can both be memorable experiences if they are thoughtfully prepared and presented. 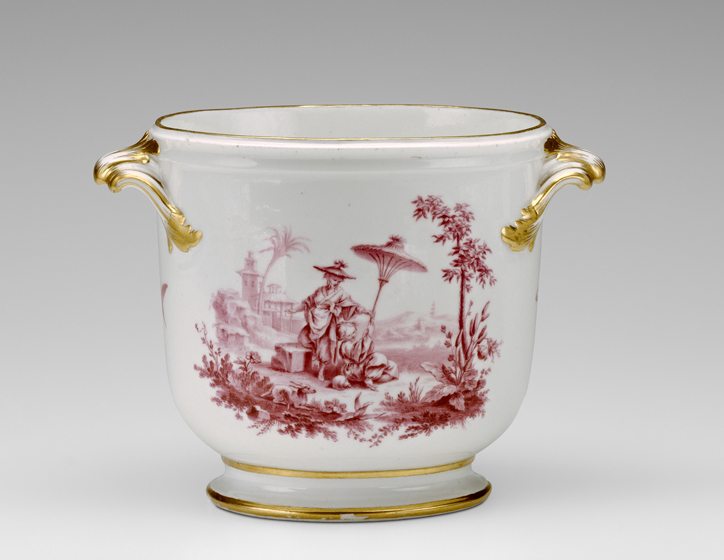 At the National Gallery of Victoria (NGV), commencing in conjunction with the Melbourne Food and Wine Festival on February 5, 2014, will be a new exhibition Art of the Table.

The show will explore the aesthetics attached to the centuries old European tradition of dining at table, arranged for enjoying culinary delights.

Art of the Table will draw on the NGV’s superlative collection of decorative arts, many of which originally came from their significant bequest left to the state of Victoria, and NGV in particular, by merchant, importer, businessman and philanthropist Alfred Felton (1831-1904).

Giving dinner parties for centuries was the direct route for men of power and influence to obtain a sure and secure ‘footing in society’. Everyone endeavoured to own stunning accoutrements.

They were designed to deliver daily delicious dairy and desserts, as well as fortifying and fancy foods, especially imported luxuries of tea, coffee and chocolate so integral to fashionable eating, living and dining in style.

There was no better passport than gaining a great reputation for giving good dinners. This not only involved the food, but also the hosts observing the minutest details of etiquette, the beauty of the setting in which they sat their guests, the way they were treated by their hosts whose aim was to ensure that those invited would feel welcome, relaxed and enjoy each other’s company and dining in style.

Alfred Felton had no direct descendants. He established a trust benefiting both charitable works and the community of Victoria.

The gallery team chose outstanding items from his personal collection for theirs, which today form the core decorative arts for their fabulous collection.

They also purchased amazing art works with a trust established with the modern day equivalent of over $35 million dollars.

Arthur lived in an age when enjoying an elegant repast was always preferable.

French cuisine, French chefs and French style were the rage in Europe and England, while its language was that of diplomacy, and spoken at all the courts. In England and Europe the emphasis on hospitality from ancient times until World War I meant having the right equipage was both a social duty and a splendid means of displaying one’s power and influence.

Everyone, whether rich or poor, took great pride in giving the best they could afford to all their visitors. 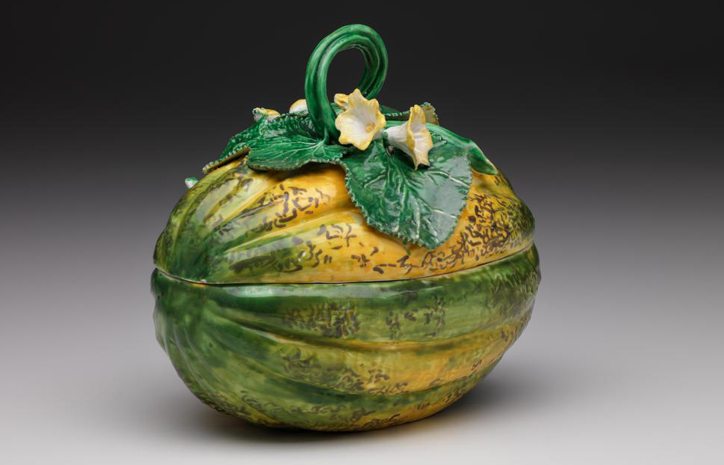 Porcelain figurines and objet d’art decorated the table with glorious flowers arranged as if they had been gathered loosely from the garden to adorn the table. These all became de riguer for those in the know, and with the ready necessary.

Art of the Table will showcase a recent NGV acquisition – a mid-18th century French traveling service, (Nécessaire de voyage) designed to dispense chocolate, which will be on display for the first time. The story of chocolate is indeed ‘bittersweet’. The origins of the word “chocolate” came from an Aztec word “xocoatl,” which referred to a bitter drink that had been brewed from cacao beans.

The Latin name for the cacao tree on which the beans were produced was Theobroma cacao, which means “food of the gods.” Both the Mayans and Aztecs believed it had divine properties.

For much of its long history ‘chocolate’ was only a beverage that people drank, and sugar was not an additive. It was an active aspect of historical trade for centuries before sugar was added.

Chocolate means anything made from the ‘Cacao’ bean, while ‘cocoa’ is chocolate in powdered form.

Purchased by the NGV Supporters of Decorative Arts, 2012, the mediums used for the ‘chocolate service on display are porcelain, glass, silver, leather, wood, brass and other materials.

So in one fell swoop, you have a work of art that is representative of many disciplines. Pair Mennecy figurines, of an actor and actress c 1755 - Mennecy produced figures of the Italian commedia dell’arte although these charmers are not attributed to the series - courtesy BADA dealer E & H Manners, London

The Mennecy manufactory was founded under the patronage of Louis-François-Anne de Neufville, Duc de Villeroy (1695-1766).

Produced from 1748 in the outbuildings in the park of his Château de Villeroy in Normandy, with workers from the nearby village of Mennecy, the soft paste porcelain wares produced there have great charm.

It particularly specialized in small figures, such as Harlequin and Columbine, characters from the Italian Commedia Dell’Arte.

Amanda Dunsmore, Curator, International Decorative Arts & Antiquities, NGV, said: “Art of the Table will present a variety of exquisite ceramics, glass, cutlery and silverware that adorned the dining tables of the affluent from the 16th to 18th centuries.”

Superb porcelain dinnerware by Meissen, produced under the auspices of the Prince-Elector of Saxony ‘Augustus the Strong’, will also be on display.

The Meissen factory was the first to produce dinnerware’s made from European style hard paste porcelain, inspired by Chinese wares as Augustus the Strong, Elector of Saxony went on a passionate pursuit of princely power and prestige.

The result would inspire many other ceramicists in Europe and England to follow suit.

The Chelsea manufactory from England will also be represented. 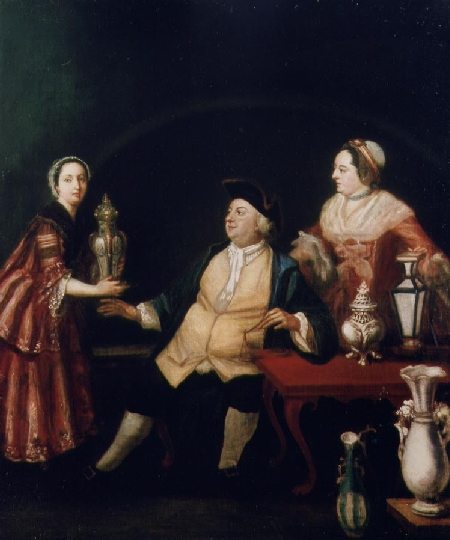 Flemish Huguenot Nicholas Sprimont and his wife and sister. Arriving in England c1742 in 1743 he and a partner opened their Chelsea Porcelain manufactory

Chelsea  was  a  village on the outskirts of London at the time,  famous  for  its  plant  nurseries  and  market  gardens,  notably  its  Physick  Garden.

Establishing  a  commercial  factory  in  a  residential  area  may  seem  strange  to  us now,  however  in 1743 the  considerations  were  mainly  those  of  commercial  convenience.

Huguenot (Flemish protestant) silversmith  Nicholas  Sprimont (c1716-1771) lived in Chelsea and he and his partner Charles Gouyn set about making decorative pieces for the luxury market, often copying designs from Meissen in Germany or Vincennes and Sèvres in France.

In the early days of porcelain manufacture, a great many designs were taken from silver models, so there was a great advantage for Sprimont to extend his commercial interests, and to make more money.

Clearly watching contemporary television series such as Downton Abbey, which documents life upstairs and downstairs in great detail, including the art of dining at table both above and below stairs, has such a large influence worldwide.

It has brought ideas about dining together back into focus in the public arena for a whole new generation to discover.

Over the centuries every ancient culture on earth in its day has attributed the origin of agriculture to some beneficent deity. The Egyptians had Osiris, the Greeks, Ceres and so forth.

Somewhere along the line however humankind elevated his and, or her mind, to associate sociability with food. 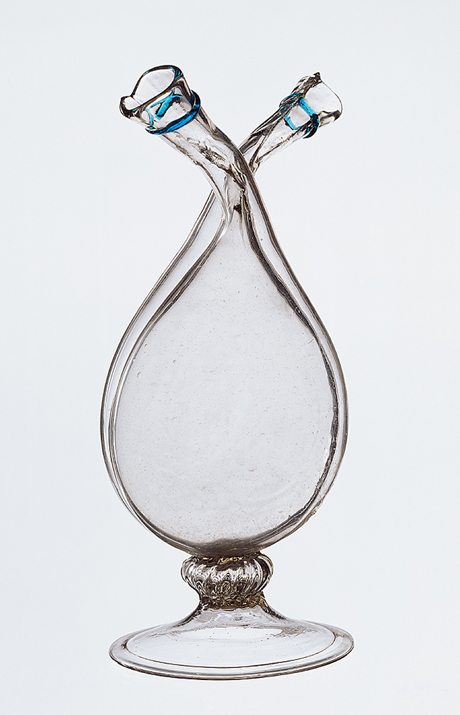 Gradually over a long period time it evolved to represent and reflect their cultured, ‘civilised’ state... he may live without love, – what is passion but pining? But where is the man that can live without dining? *

The time for dinner varied enormously over the centuries. It was the principal vehicle for hospitality, as well as the main meal of the day.

For a long time giving grand dinner parties were ranked as the first amongst all entertainments, having more social significance and being more appreciated by society than any other form.

Roman feasts originally had been given by the pontiffs of pagan Rome, men of exquisite delicacy and matured taste who earnestly believed they were.

In the countryside Romans would collect in the late afternoon when the air was not so hot, to recline and eat enjoying the panorama of the neighbouring countryside, which was presented, without obstruction, to the gaze of the guests.

It was a custom that has continued through history from their culture for two thousand years.

The Emperor Nero saturated the air with exotic perfumes and showered flower petals on his guests.

His bread, his ale were finest of the fine
And no one had a better stock of wine
His house was never short of bake meat pies
Of fish and flesh and these in such supplies
It positively snowed with meat and drink The Art of the Table should not only attract a whole new generation to discover the art of dining at table, but also hopefully inspire them to innovate a whole new range of possibilities for dining well, with care and in style. Art of the Table

Matthew Martin, Assistant Curator, International Decorative Arts & Antiquities, said that each of the cases will exhibit dining wares developed for particular foods and beverages, such as imported tea, coffee and chocolate, medicinal and fortifying foods, and foods for the dairy and desserts. “We have developed themes to highlight a variety of dining practices. This will include the serious business of drinking with all the theatrical accoutrements; 18th century equipage relating to the newly imported luxuries of tea, coffee and chocolate; the invention of the porcelain dinner service showcasing a splendid Meissen service from a private collection and Renaissance dining featuring 16th century Venetian Maiolica plates and German stoneware. “Art of the Table will also compare traditional items from the 18th century with their contemporary counterparts in a case themed ‘then and now’,” Mr Martin said.

“Stucco” is an Italian term, denoting a mixture of lime and marble, more widely used in Britain to mean internal or external lime-based or gypsum based plasterwork. This is a superb example of the Italian stuccatori’s art carried out in 1730 on the walls of the staircase at Mawley Hall,…