Boarding the Indian Pacific at 3:00 pm was reminiscent of childhood excitement about the wonders of travel and the possibilities of new artistic experiences. 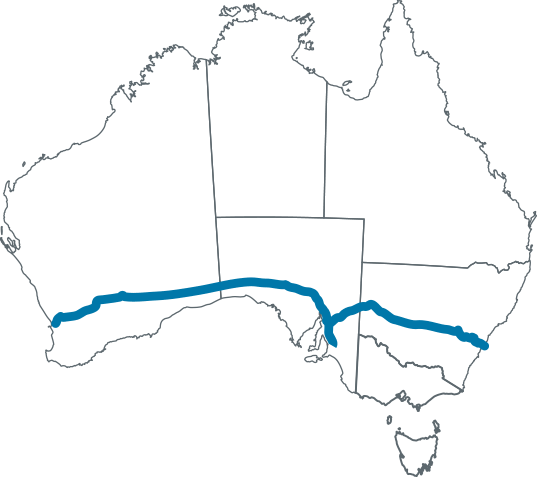 Route of the Indian Pacific, across Australia

The train was soon to arrive in Broken Hill, known as the Silver City, Australia’s longest-lived mining city. Two legendary Outback bases the Flying Doctor Service and the School of the Air are located in Broken Hill.

However my off train excursion was to The Living Desert Sculpture Site a vibrant part of the town’s creative history. A bus drove nine kilometres to the Living Desert nestled amongst the Barrier Ranges on an imposing hilltop with 360 degrees of stunning views of the surrounding landscape. Twelve massive sandstone sculptures were completed in 1993 by artists from around the world including Mexico, Georgia, Syria and Australia. They communicated many varied stories and majestically highlighted the clear blue sky.

The Living Desert Sculpture site provided the opportunity for a self-guided walk amid monumental artworks and breath-taking vistas of the New South Wales outback.

I was deeply moved by the poignancy of Thomasina (Jillarruwi – the Ibis) crafted by Thomas Munkanome from Tiwi, Bathurst Island. This sculpture of a water bird was named after his daughter who was born while he was creating on site. Sadly she died of Viral Meningitis very soon after Thomas returned to Bathurst Island.

According to the plaque “the unfinished sculpture may be viewed as a metaphor for the child’s brief life.” The melancholy is carved in the stone as the sculpture retains the essence of grief. The Indian Pacific journey ended for me in Adelaide where the Art Gallery of South Australia was showing the inspiring Sappers & Shrapnel Contemporary Art and the Art of the Trenches exhibition. This exhibition curated by Lisa Slade gathered works made by soldiers in action or convalescence and contemporary responses produced by eleven artists and artist groups from Australia and New Zealand. 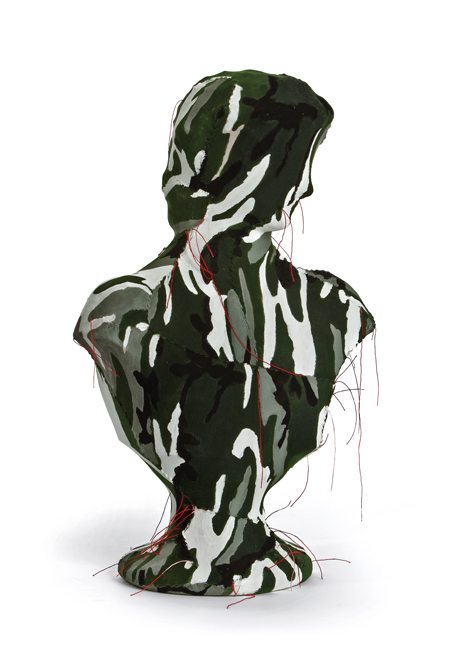 This was a confronting exhibition, profoundly moving, enigmatically solemn and paradoxically beautiful. Objects from war were crafted, challenging the viewer’s perceptions, stimulating thoughts and emotions about war and its horrific consequences. At times I’m sure the act of creativity provided solace for the participants of war and supported their physical and psychological rehabilitation.

Sappers & Shrapnel combined trench art with artworks constructed one hundred years later by contemporary Australian and New Zealand artists. The art project not only triggered memories of past warfare but also expressed the artists’ responses to current experiences of war and conflict. The powerful wall ‘paintings’ by artist Ben Quilty, constructed from life jackets washed up on the shores of Chios formed an ominous reminder of the more than three thousand asylum seekers who have drowned attempting to make the perilous crossing of the Aegean Sea to Greece.

In 2016 Quilty and writer Richard Flanagan travelled to Lebanon, Lesbos and Serbia with World Vision. Here they met, in Flanagan’s words, “the great river of Syrian refugees.” Dresses for Soulaf by Raghda Alrawi and Ben Quilty’s installation in Sappers & Shrapnel at the Art Gallery of South Australia. Photo: Paul Steed

Quilty met her and her husband in a refugee camp in Lebanon’s Bekaa Valley. As a young Syrian women working as a dressmaker and using naked mannequins (a crime punishable by death) she was at extreme risk and had to flee this tenuous situation.

Ben Quilty and Raghda Alrawi’s art works reflect the brutality, senseless waste juxtaposed with the optimism and courage within the human heart. Beauty and truth reign in their very fine work. Next stop was the historic Murray River port of Mannum and I enthusiastically boarded the paddle wheeler, PS Murray Princess and savoured the tranquillity and timelessness of Australia’s mightiest river.

The soothing calmness of the river, abundant birdlife, ancient towering cliffs, wetlands and disembarking at Murray Bridge to explore the three exhibition spaces at one of South Australia’s leading regional galleries combined to make this cruise unforgettable. In Tales from the Wild West Australian artist Cindy Durant who lives and works in Penong, SA used enamel on metal to create an array of arresting artworks.

She experimented with different forms of screen printing in the artworks that reflected the “beauty, detail and rawness” of the west coast of South Australia. She captured each scene with honesty and imbued them with love and appreciation of place. Next, off to Queensland where I travelled on the Noosa ferry along the tranquil shallow Noosa River viewing on port side the very expensive houses on Noosa sound, the line of restaurants and coffee houses that service locals and tourists, on starboard the natural bush and in front pencil point hills dotted the skyline.

The relaxing still water journey ended at Tewantin, the heritage heart of Noosa. The Parties Over by Dave Gilbert, Ceramic, courtesy artist and Noosa Regional Gallery

The Noosa Regional Gallery is located a short walk from the marina where a Taste of Art presented an exhibition of the ‘rich and diverse local creative voices from artists and hobbyists alike.’

Eighteen year old Ashlee Becks’s Wisdom Beyond Years is a very painterly portrait of her mother where thick brush strokes of oil on canvas were ‘figuratively expressive.’

The eyes are contemplative as is the position of body and folded hands. Pastel colours and a midnight blue background intensify the mood.

Ian Charlton explains about his artwork Yin and Yang “. In this non-traditional painting, the title, patterns, rhythms and the absence of colour conspire in an enigma – viewers are challenged to consider a range of responses to the work.”

The bamboo like black grey vertical lines are crossed by more flowing rhythmical strokes creating a harmonious composition that echoes a strong musicality.

Kym Barrett used “oils and cold wax to attempt to evoke a sense of depth and mystery that is, for me, the essence of Connemara.” In Remembering Connemara she has summoned a mental landscape in the isolated, windswept, bleak and dark wilderness of Ireland.

The silence and brooding spirituality of the scene lingers in the viewer’s mind. Back home again in Sydney I was able to reflect on my travel and art experiences while listening to a special holiday purchase, the very well-reviewed CD Four Hands Australian music for piano by Ross Edwards, Carl Vine, Peter Sculthorpe, Stuart Greenbaum and Elena Kats-Chernin.

Tables decorated by designers, architects, florists and couturiers in the Great Hall of the NGV International, May 2 & 3, 2019, will celebrate the Art of Dining