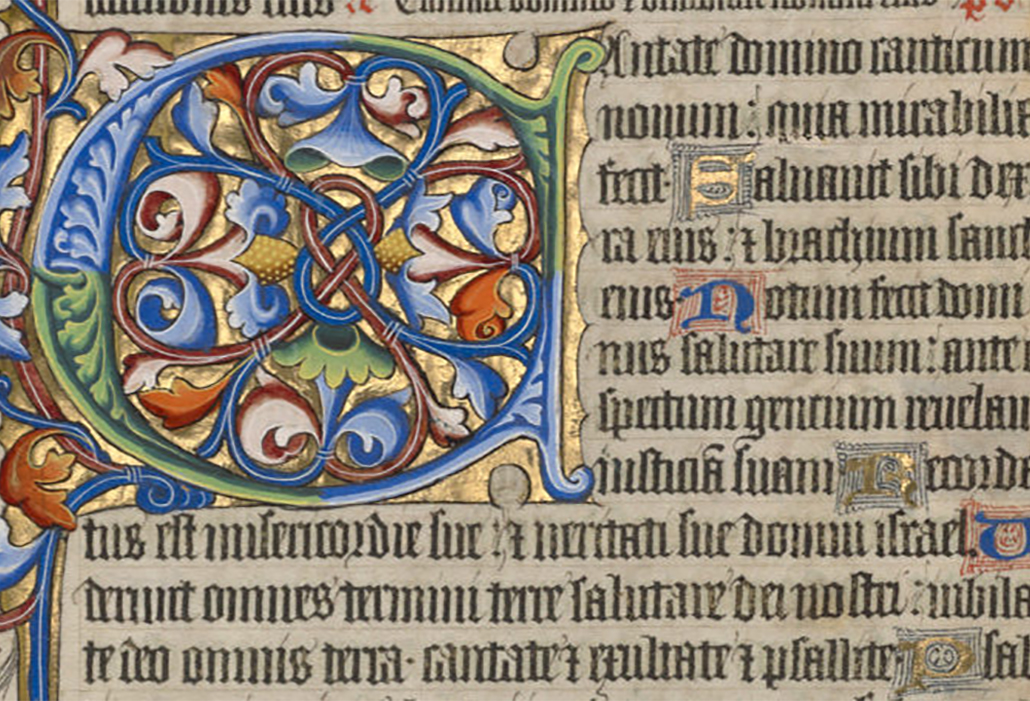 Alphabetic adornments enliven the pages of a diverse range of manuscripts, including sacred scripture, Romanz literature, and historical narratives produced from England to Central Europe and beyond for nearly one thousand years. 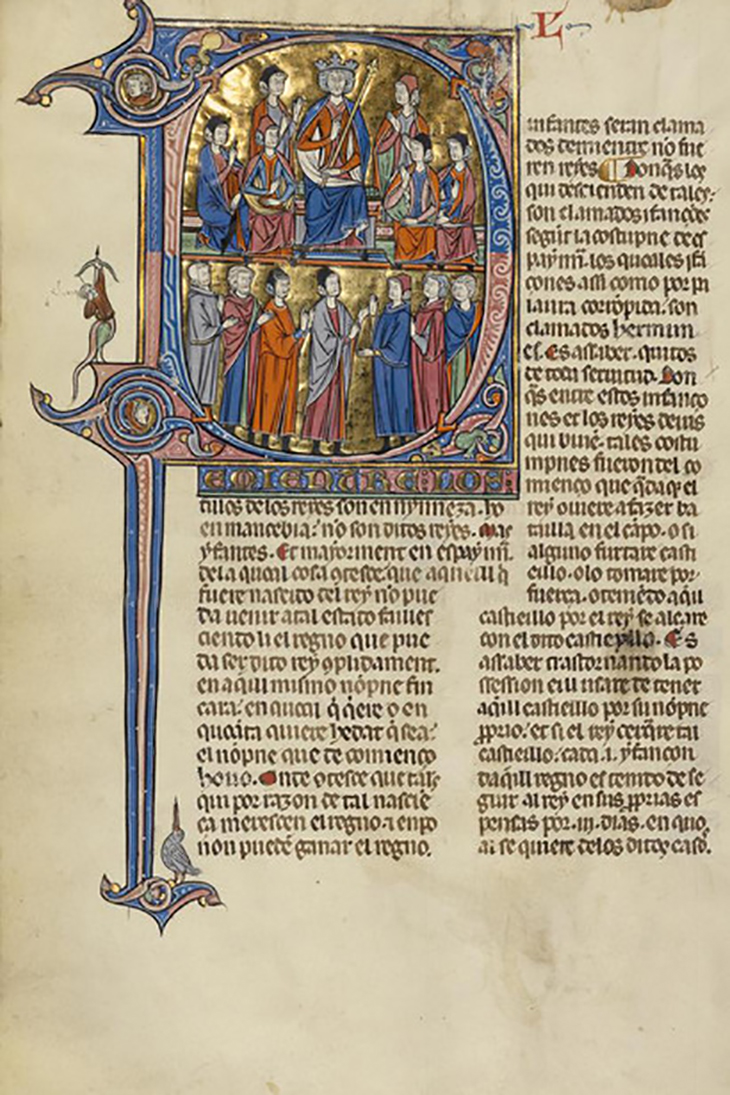 “We consume words in a variety of ways: in handwritten, printed, and digital media and by decoding messages that are communicated not just by the combination of phrases but also by their design and styling,” said Bryan C. Keene, associate curator of manuscripts.

The written word became an art form during the period we know as the so-called European Middle Ages, 5th -15th centuries and since then words have been how the world works.

During this period calligraphy filled the pages of manuscripts with ‘scrolling vines and delicate pen flourishes’.

Today these decorative embellishments reflect the values attached to handmade books of their time.

Advances in philosophy and science were held up to scrutiny in a period known as the “Twelfth Century Awakening”. This was when an outpouring of extraordinary intellectual inquiry and discovery took place through the Islamic influence on European thought.

The creativity of the people of Islam had no peer in the European mediaeval world, which during the Middle Ages was a frontier society, fragmented, fearful and rudely fortified against itself.

Romanz literature was derived from the language spoken by the Romans, i.e. Latin) and in the French vernacular, was referred to as “Romanz” to distinguish it from “real” literature, invariably written in Latin. 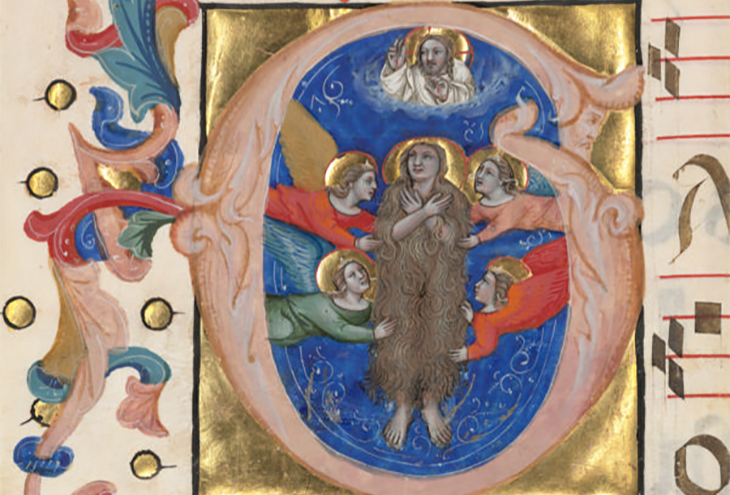 Over time however, Romanz began to refer to the specific sort of narrative literature popular among the French-speaking court audiences of France and Anglo-Norman England: stories of the chivalric adventures of knights and their ladies.

Europeans of the Middle Ages envisioned, constructed, and completed many magnificent churches and cathedrals and their philosophies and intellectual ideas are at the beginnings of modern-day democracy, mercantilism and portraiture.

Together with far-reaching technological developments in printing, engraving, metallurgy, ship-design and firearms, people of the middle ages in many ways, helped kick start our modern age. 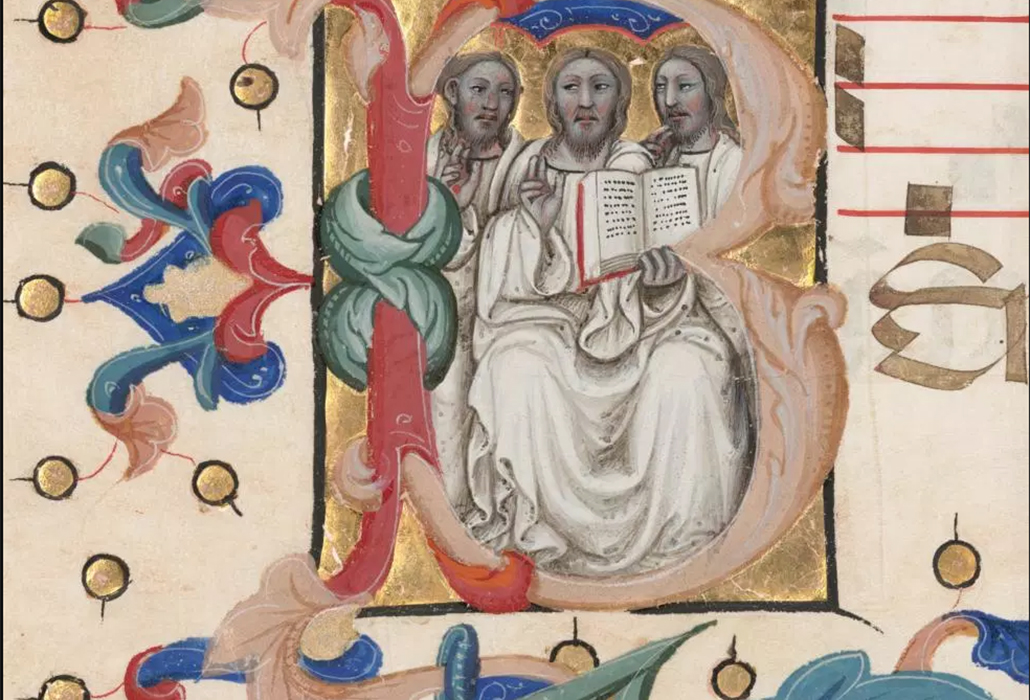 Illuminated manuscripts and their words and illustrations, open windows for us into the medieval world; they are a graphic expression of the priceless jewel contained in the sacred scriptures of God’s revelation to man.

Illuminated illustrations were highly appropriate to embellish books containing the word of God, as they allowed for an additional, worthy thought, that of aesthetic pleasure. The calligraphers combined script and ornament to embellish pages, while illuminators developed original and complex strategies for fitting miniature stories into individual letters.

Several of the manuscripts feature signatures by their scribes, calligraphers, or artists. 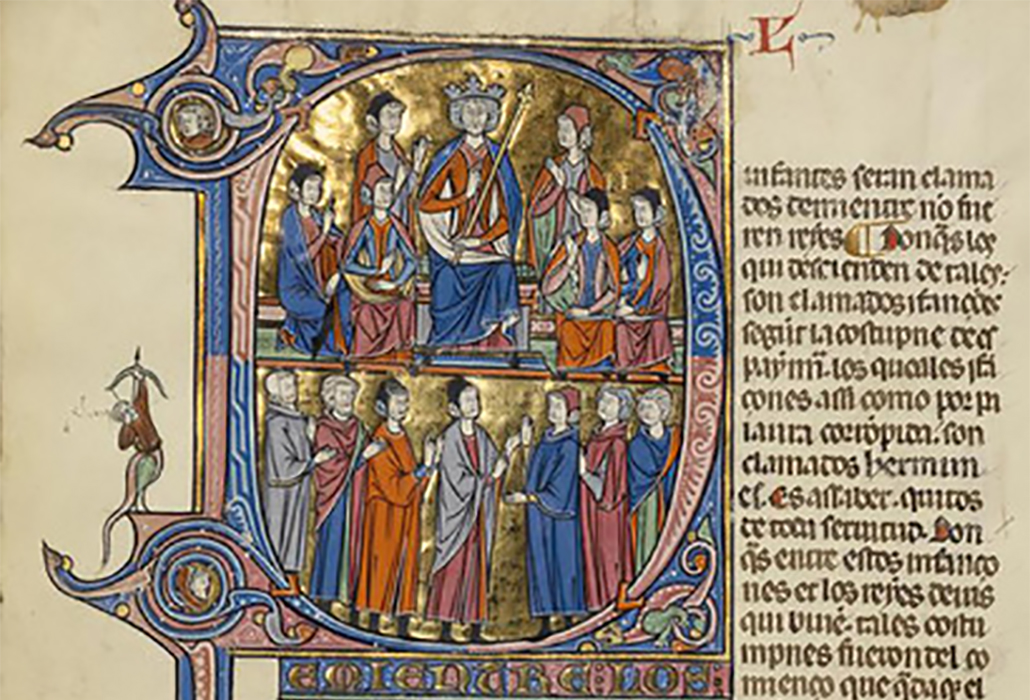 The Getty tells us:- three types of decorated letters were employed in the handwritten book arts of the Middle Ages

Inhabited letters, in which strokes of the letter are made up of animal, human, or hybrid forms;

Historiated initials, in which the letter includes figures or other content related to the text. Alphabetic adornments appear in manuscripts from a Bible or Qur’an to books of prayer, law, and history. “Among the highlights in the exhibition is a grouping of manuscripts penned by the famous scribe David Aubert for Duchess Margaret of York, as well as a Qur’an paired with an Italian ceramic vase with imitation Arabic script” assistant curator Bryan C. Keene said.