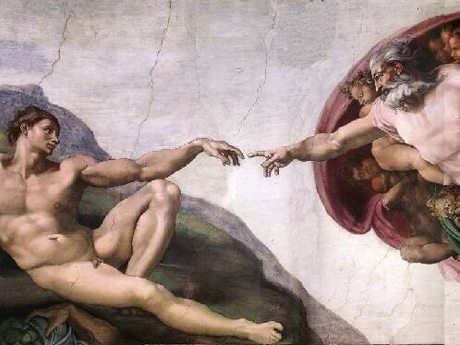 The image of Adam and God reaching out for each other is one of the most powerful images in all art that we still have. ‘…ever since the creation of the world, the invisible existence of God and His everlasting power have been clearly seen by the mind’s understanding of created things’*

Art can manipulate the perceptions of others through the addition of symbolism, because it adds a certain mysticism and beauty making communication more vivid and successful.

The art of fresco painting reached its zenith with the magnificent cycle painted by Michaelangelo on the ceiling and walls of the Sistine Chapel, universally recognized as one of the world’s greatest art treasures.

Michelangelo di Lodovico Buonarroti Simoni (1475 – 1564) received this extraordinary work as part of a huge commission from Pope Julius II (1443 – 1513) to cover all the surfaces of the chapel.

Fortunately my first visit to the Sistine Chapel was during the 1970s and like all of those who stood alongside of me staring up at this incredible feat above that had first been unveiled in 1511, was the amazing depth of Michelangelo’s figures’ sculptural qualities.

Despite the grime of time they seemed to step positively out from their background. The restoration during the 80’s has seemed to diminish much of their original impact, while making the colours brighter as indeed they would have been originally.

Many art historians were certainly critical of the methods used following the ‘restoration’. But there it is, what has been done cannot be undone. The ceiling includes over 300 figures in a complex scheme. At its centre is a representation of God’s creation of the earth; of Adam and Eve representing humankind; their fall from grace and the proof of their human frailty. God is offering Adam life, love and forgiveness and Michelangelo captured perfectly the essence of their divinity. While God is clothed and confident Adam is naked, displaying both his vulnerability and yearning need for continuing communication and interaction.

Words often fail where symbolism succeeds. And, when taken together as here they frequently make spiritual things more fully grasped.

This is as true today as it was in those times past, when education was not as general as it is today and printing unknown. Alpha and Omega, the first and last letters of the Greek Alphabet, signify the eternity of GOD, who, without beginning or end cannot be conceived of except under human limitations. When texts either sacred or secular from many different creeds speak of a deity or God they are not speaking about reality. They are speaking metaphorically.

This should not surprise us! After all, there is no other way to talk about something essentially spirit – invisible, indivisible, indestructible and indescribable.

We are only left with metaphors, even if they are mostly inadequate. They are meant to help us unravel the real meaning of the story. The fourteenth and fifteenth centuries in Italy are recognized as one of the most brilliant periods in world art history with Florence in Tuscany, at its heart. The Florentines believed they were living in a golden age.

A fourteenth century citizen did not display his wealth in a dangerous, uncertain world. However by the fifteenth century a visual demonstration of a man’s achievements became a key to his social dominance.

The rediscovery of texts by ancient writers at this time increased knowledge about the classical past. It brought forward a focus on humanism; a belief in the advancement of humanity through knowledge. And, of major importance was the family unit.

Dante and his Divine Comedy

Humanism, much under discussion at the time, is at its essence a belief in the advancement of humankind through enquiry. And, it was all about the hopes of a people whose visionary leaders looked to the future daring to imagine and plan for what it might be possible to achieve. 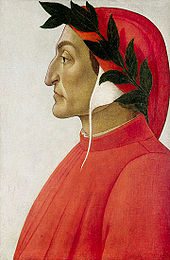 A great flame follows a little spark…it says in the (Canto 1:1.34) Paradiso – of the Commediaby fourteenth century literary giant Dante Alighieri (1265 – 1321). His symbolical use of a circle of light in his opus was meant to denote high dignity or power, to highlight ‘divine characteristics’ and inspire the loftiest sorts of humanity.

Many scholars are convinced Dante was endeavouring to paint a realistic picture of his own earthly life; conducting an intensely involved analysis of every aspect of it as an allegory of the evolution of an individual’s soul toward God; while also documenting the progress of societies attitude toward establishing and maintaining peace on earth.

The impact of his work, which had the tag ‘divine’, added to it some 200 years later, helped establish the Tuscan dialect as the ancestor of modern Italian.

The works and words of Dante inspired the greatest of all Italian Renaissance architects Fillippo Brunelleschi (1377 – 1446). He ‘was given to us by Heaven to invest architecture with new forms’ said artist/author Georgio Vasari (1511-1574) in his book ‘Life of the Artists’ one hundred years after his death. It was between 1420 and 1446 that Brunelleschi initiated a new epoch in the history of architecture at Florence by constructing the dome on its Cathedral, the first to be built since antiquity.

Such was the power of the invention and vision in Brunelleschi’s oeuvre, after the fifteenth century the city of Florence, despite its basically medieval structure, would always be thought of as a Renaissance city, a shining example of the ideal city state and the first since antiquity.

The Florentine’s believed they were living in a golden age. 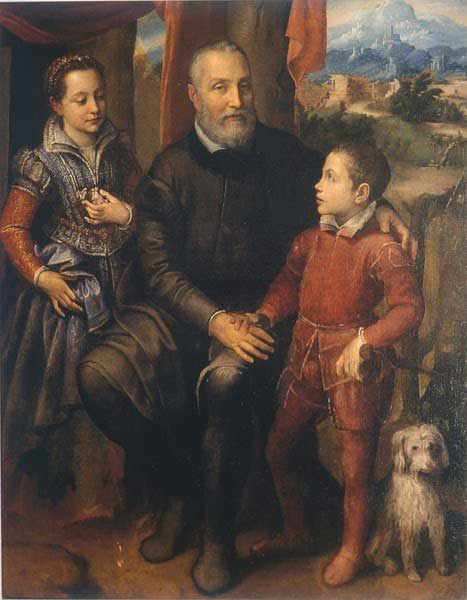 Families whose lives were based on the wealth from expanded trade with each other and the middle and far east, added to the social layer. The way it all worked offered a glimmer of hope for those at the bottom that they might move up the ladder of success through opportunity, especially if they developed both patience and the necessary skills to do so.

The Medici family became the most powerful of the many merchant families living at Florence and were linked to its political and artistic development throughout the fifteenth century (the Quattrocento).

Under the patronage of Cosimo Medici the Elder (1389-1464), who had studied the Greek classics and his grandson Lorenzo the Magnificent, (1449-1492) Florence’s fortunes and that of her artists and craftsmen flourished. Detail from the-fresco in the Brancacci Chapel 1425-28 thought to be right-to-left,architect and sculptor Filippo Brunelleschi, artist and-teacher Leone-Battista Alberti, and Masaccio and his pupil Masolino

Bankers and merchants became benevolent rulers at the heart of society and its progress. Italian patrons began recognizing that artisans, who had always worked under the direction of guilds or the church, were not only skilled technicians but also creative thinkers, discoverers and inventors. They sought to acquire their works and use their talent to advance their own social agendas.

Subsequently the realm of painting, sculpture and literature was elevated away from being an aspect of the ‘artes liberales’ to become a ‘fine’ art form simply because individuals received acknowledgment from their fellow citizens.

They symbolically ‘signed’ their wares, which became a measure of their success. This meant that increasing numbers of the expanding bourgeouise (middle classes) sought to acquire their works as status symbols, which is how they became known as works of ‘fine art’.

A wide array of artworks and ideas on show at Sydney in The National 2017: New Australian Art, sees art and artists forging a new identity for Australian art