Art is the visible expression of something both profound and invisible in whatever medium is used, and whatever forms it takes, it is shaped by the culture and age that produced it. This spring Brisbane artist David Henderson will hold his 2011 Exhibition in the Graydon Gallery at New Farm. What David offers in 30+ works is a glimpse of pure joy. They are evocative atmospheric scenes, mostly from the ancient Italian city La Serenissima (The Most Serene Republic) Venice. With brush and colour on canvas he constantly explores elusive qualities of light, while seeking to access Venice’s ever-deepening mysteries. The resultant works elevate the spirit, reveal the soul and celebrate life and art together as an expression of culture.  ‘A picture’, said the ancient Roman lyric poet Horace (65 – 8BCE), ‘is a poem without words’. If you read a lot and have read poems or books about Venice what you will find is that it is even greater than you could ever have possibly imagined. Venice is full of life, light and colour for David to capture. An artist there is like an art restorer, peeling off layer after layer to find another picture cleverly hidden beneath. 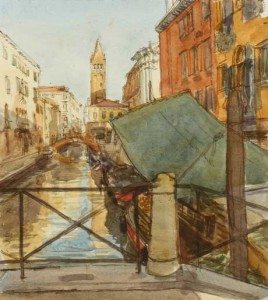 David says he can spend many hours even days in one spot, weather and light conditions permitting. He paints the well known sights such as St Mark’s Square or 16th century Venetian architect Andrea Palladio’s Redentore as well as the cities many hidden quiet canals with their Gothic surprises. He also enjoys looking back across the water at Venice from the Giardini, a large area of parkland created by France’s Emperor Napoleon, who also loved this centuries old city. It’s hard not to love Venice it’s totally mesmerizing and completely awesome.  Everywhere you turn there are small miracles to observe. Its faded splendour remains a passion for Henderson, who works there for several months each year. It is always full of fabulous characters, including artists, eccentrics and everything in between.

Anyone viewing the paintings, drawings and watercolours of David Henderson will become an instant romantic.

Contemporary British artist Professor Kenneth Howard OBE, RA has a David Henderson watercolour in his personal art collection. He says David’s work “…enriches the life of anyone who lives with it. His language is in the great British tonal tradition and communicates with us directly”. David Henderson teaches painting, drawing and art history. He spends much of his time in Europe, with extended time at Tuscany, Rome, Venice, Sicily, Normandy and Paris. A lecturer in the history of art and design David also leads tours and lectures in both Italy and France. If you have had the good fortune to visit Venice, the most extraordinary of all the world’s famous cities, it is easy to understand David’s continuing fascination with a city renowned for the beauty of its setting. This year a side visit to Istanbul (Constantinople) resulted in two watercolours being painted in March and they will be included in this exhibition. The decorative Byzantine inspired design style from Constantinople (Istanbul), when married with the Gothic style of Europe achieved a unique, distinctive exotic design style at Venice. It was a city the size of New York’s central park with a history of 1100 years littered with warring, plotting of wars, profiteering from other nations wars and counting the loot brought home when in 1204 it overwhelmed Constantinople, the greatest and richest city on earth at the time. One of the treasures it captured was the secret of ancient Roman glass passed down through the centuries from the original workers. It was during the fifteenth century that Venice entered an era of artistic expressiveness that would gain momentum with the interest in humanism throughout Europe. By the mid fifteenth century glass workers on Murano, an island in the Venetian lagoon, could blow and work glass into a great bewilderment of shapes. Today they still literally take your breath away through their beauty of form, inventiveness and creative spontaneity, all characteristics integral to the city of Venice itself. By 1500, tiny Venice was the largest empire in the west. Nineteenth century English art critic John Ruskin said ‘the traveller can still stand upon a marble balcony in the soft summer air, and feel its smooth surface warm from the noontide as he leans on it in the twilight; can still see the strong sweep of un-ruined traceries drawn against the deep serenity of the starry sky, and watch the fantastic shadows of the clustered arches shorten in the moonlight on the chequered floor’. 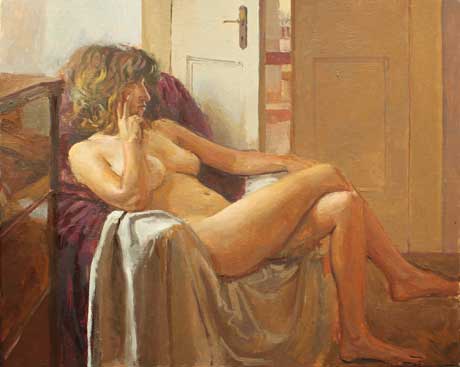 These are the images Henderson captures so brilliantly.

Venice is beautiful, Women for David are beautiful, and his exploration of technical excellence in art places a great deal of emphasis on drawing from life. Exploration of line is part of the tradition at the Royal Academy founded by George III in 1768 at London, of which he is a graduate. The motive in founding the Academy was twofold: to raise the professional status of the artist and to arrange the exhibition of contemporary works of art. British painter Sir Joshua Reynolds one of its founders stressed the importance of copying the old masters, of drawing from casts after the antique and, from a real life model.

Former Director of the Queensland Art Gallery Raoul Mellish (1928-2009) said of the works of David Henderson “The freedom of brushwork. It’s not laboured; it’s never worked over. All these lines are just taken freely and once only. And with most of David’s paintings, it is the moment of a particular place at a particular time of the day, which is so very important, and there’s immediacy”

All images reproduced by kind permission of the Artist

Peter Pan has the eternal optimism of a child, which means no matter what hurdles or obstacles he needs to overcome what is important is that he believes he can