Cultural exchanges between nations are vitally important in the complex and conflicted world we live in today. The Art Gallery of New South Wales will, from 6th March to 1st June 2014, present works by Sydney-based artist Khadim Ali, who was born in Quetta, Pakistan. His family was forced to flee from their homeland more than four years ago. It will be exploring his stories of ‘cultural vandalism’ as a related event to a major exhibition starting in March 2014, Afghanistan: Hidden Treasures from Kabul. This show will include Ali’s work the ‘haunted lotus’, which considers familial ties, the Hazara people and culture, and the emergence of a lawless society in Afghanistan. As all art is the art of now it reflects the demons that continue to haunt Khadim Ali. His works include fine gouache and ink paintings; a series of large-scale, richly coloured rugs; and videos that represent the artist’s working methodology. Khadim Ali expresses in his art the deep and personal concerns he feels about family, his own heritage, the construction of morality (good and evil) and ethnic, racial and religious fanaticism. It will be presented in conjunction with the landmark international exhibition Afghanistan, which showcases many hidden treasures from Kabul. Born in Pakistan Khadim Ali is in the third generation of his family to find themselves dispersed from their homeland. His grandparents fled Afghanistan to India then to Pakistan in the 1920s after a massacre of Hazaras. 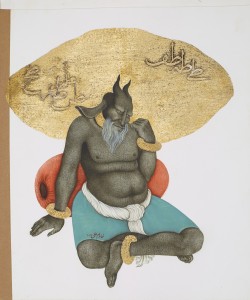 The history of persecution of the Hazara in Afghanistan and fear of the Taliban have followed Khadim Ali and his family to Sydney, which has now been ‘home’ for more than four years. In addition to the social issues, Khadim Ali revisits recurrent themes in his work, such as the construction of morality (good and evil) and ethnic, racial and religious fanaticism. The exhibition will also contains Ali’s first handmade rugs – fine carpets are so much a part of life in Afghanistan and so their designs represent a turning point in his practice. 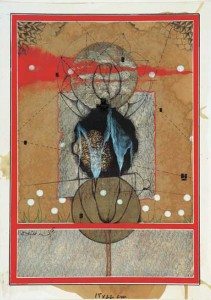 Khadim Ali completed a Bachelor of Fine Arts (Miniature Painting) at the National School of Art, Lahore, Pakistan, in 2003, and has exhibited widely in Pakistan, as well as in Iran, Japan and Afghanistan. His work is now entering major international collections. As the artist says: ‘My demons are the story of my historical self and a people who are displaced and shelterless around the world’. This exhibition at the Art Gallery of New South Wales has free admission.