Guest author artist Scott Maxwell works in a number of mediums. He filed this recent report on his ongoing journey in the world of arts…

I first met Scott at St John’s Cathedral when he designed the Millennium stained glass window for the Great West End completed in 2006.

After that he created The Flight of the Egret in the Chapel of Royal Brisbane Hospital. 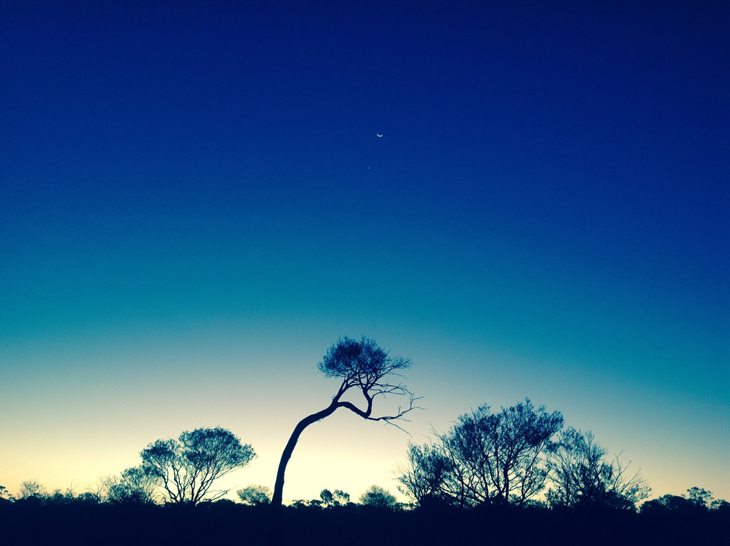 How many artists get the opportunity to do a workshop in Stonehenge?

… with all expenses paid!

To clarify, we are not talking THE Salisbury Plains Stonehenge (where, most coincidently, the rest of my family are visiting at this very moment).

This is THE Sunburnt Plains Stonehenge, right smack bang in the centre of Queensland – out in the remote, parched, Channel Country Byway.

This particular sunburnt plain is more accurately referred to as the Gidyea plains – a place of Gidyea scrub and Gidyea gibbers.

After touchdown in Longreach, I hit the vast open road in a southwesterly direction to Birdsville.

This is mega flat country with no speed cameras. Along the way I stopped several times to take photos, one of which, was a dramatic encounter at Woodhenge where two wedge tail eagles were keeping an eye on me at a very close distance!

After arriving in Stonehenge (pop 25) and booking into the quintessential outback pub. I went exploring along the Thomson River to find water (where there is water there is wildlife)

What I discovered were the biggest, hugest mussels I have ever seen – as big as my hands.

Sunset came and the after glow was overwhelming.

The moon and stars were intensely bright and it was still daylight.

I found a steel dinghy in the middle of no mans land.

It looked quite absurd, most bizarre.

It carries the post across the river when it floods. How will it float? Courtesy artist ©Scott Maxwell

Yeah, right? How the hell would it float?

On Saturday and Sunday I work-shopped with the eleven wonderful women of the west.

We set a goal that each person would start and finish a functional piece to take back to their respective rural retreats.

After much grinding, hammering, sawing, sanding – they all managed to do just that – have a completed piece each… and it took the full two days.

And it was such fun! No gluing and screwing – just good old-fashioned nails whacked with hammers.

The only place we could work was out the front of the hall across the road from the hotel because it was the only spot that was sheltered from the Antarctic wind.

It was sooooo cold (my toes are only thawing out now). The noise and commotion of the women at work aroused the town’s interest and even a tour bus from Birdsville stopped to take photos of this frenzied activity – such was the attention we created.

Leonie did a great job in harnessing the wider community to participate in this workshop.

Somebody said it should be an annual event.

Anyways, it was an absolutely amazing place with wonderful people with FANTASTIC results.

I am sure some of the rustic, shabby chic furniture will become family heirlooms way into the future.

Ref: Stonehenge may not resemble its namesake in the United Kingdom, nevertheless this Outback Queensland town is something like a sentinel. It is one of only three areas chosen by the Defence Department as site for the Over the Horizon radar initiative. Though a long way from the ocean this system actually guards the coastline. The name Stonehenge does not come from standing stones, rather the remains of a stone fortress built for the bullock drivers when they stayed overnight. The main industries around Stonehenge are sheep and cattle grazing. Stonehenge is ideally suited for bird watching enthusiasts, with the Thomson