Put quite simply art reflects the very essence of our culture, its attitudes and philosophies, its fashions and passions 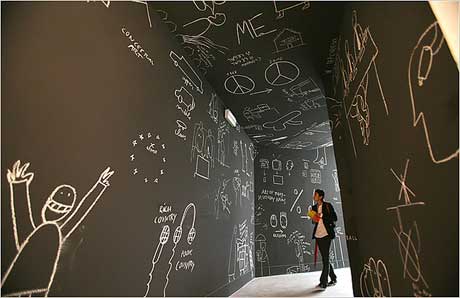 Art, what is it all about? Art Basel, Switzerland 2011

Recently I received the ArtMarket Report Issue 40, 10th Anniversary Issue.  It includes ‘essential info for collectors of art, with a main focus on Pan Asia and the new emerging global markets’. For anyone who considers himself or herself a serious art collector, or for those who just admire works of fine art either here in Australia or overseas, this excellent publication is available in the aesthetically pleasing printed version now on my desk, as well as online.

Over its first decade of delivery the report has grown its readership at a steady rate, seeking out and catering to those genuinely interested in the very best information available. It has gone from a slim volume to a fat one, packed full of information and articles. To reach this important milestone in its development, its editor and founder Sydney based Alison Harper, has worked long and hard. She has trawled the art marketplace in Australia as well as internationally, so that she could provide first hand reports and give her assessment of artworks from her admired professional viewpoint.  Over the decade since the first report rolled of the presses she has added to the growing number of prestigious contributing writers for her journal. They have helped her to provide an intelligent, diverse and balanced point view on what is happening at art auctions, art fairs and, in galleries both private and public. 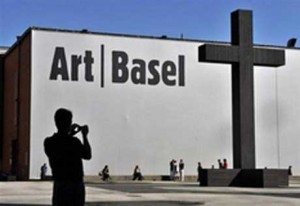 It is interesting to discover, according to Dr Iain Robertson Head of Art Business Studies at Sotheby’s Institute at London, that Art Basel in Switzerland has overtaken the Venice Biennale as the premiere show in Europe. This year’s fair saw amazing works on sale, heralding the health of the market and its recovery from economic gloom. Some 300 galleries from 35 countries were culled from over 1000 applicants, ensuring that those who were successful were of high quality and had a great chance of maximising their profits. The 10th Anniversary edition of the ArtMarket Report provides an insight into ten tumultuous years and a report from contributor Roger Dedman looks back to detail what has changed so dramatically in the world of art over that time.

When a great art work or a collection of great art works are sold under the hammer the spirit of the collector is what it is really all about; the person, their personality and a sometimes private but always passionate pursuit. The art fair market is, as it should be, a continuing moveable feast containing works of fad and fashion, those that are dark and serious, as well as those that illuminate through their sheer virtuosity and genius.

For many young people entering this world it must be completely confusing, as today because just qualifying what distinguishes one work of art from another as great, is an often complex and a somewhat completely mysterious process for many. It is about why, where, what you know, who you know, or did know, where you are at, what you are saying and/or how well you are saying it. It’s about interaction socially and culturally and is a virtual kaleidescope of expression, experiences and emotions. Capitalizing on markets where new wealth is a growth area, the commercial trade and auction houses have honed in quickly and with great urgency, to showcase on an international level so many new and emerging artists it is enough to have one’s head spinning in a full circle. George Condo, whose arresting work Field of Figures sold for $450,00 at Basel this year emerged out of the dynamism of the New York art scene during the early 1980s. He swiftly established himself as an unparalleled draftsman with a distinctive, arresting painterly style.  His cartoon like images have captured for him a great many followers, who enjoy his humour and ability to comment on contemporary life in a delightful way. His next exhibition is at London from 18th October – January for anyone travelling that way, held at Southbank Centre’s Hayward Gallery. 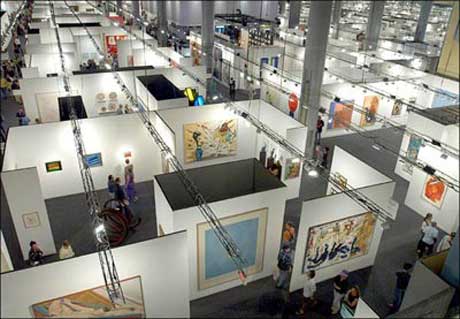 According to Roger Dedman in the ArtMarket Report the Australian auction scene has changed dramatically over the decade, almost to a point beyond belief. Artists here now have to compete not only at a national level, but also internationally if they wish to succeed. The Internet and a massive online business have finally broken down all the barriers previously in place so that anyone really has an opportunity to access the best. All they need is the ready necessary. It is about how much you are willing to pay to feed your passion and move in illustrious art circles. Artists who achieve any sort of pinnacle of success in an all-new global market will, by elimination be very special. It will take very rare individuals with a great deal of prodigious talent and a firm and honest belief in what they are doing so that others willingly and readily will buy into their ‘why’ and subscribe to what they are saying. Works of Art have become big business. 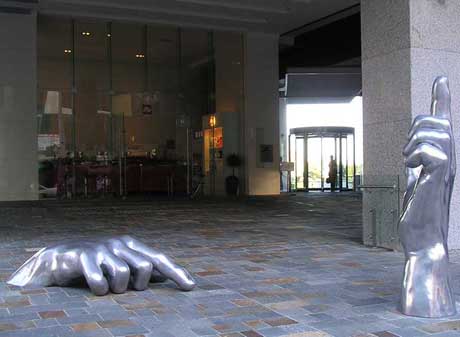 Creepy, watch out for what you wish for

Qualifying what art is has now become even more difficult. While art encompasses an enormous and extraordinary range of mixed media in its production these days, art on canvas and sculpture still seem to predominate.

Art works commissioned for public precincts and architectural settings are growing,  creating much amusement for citizens in cities and towns or, attracting controversy and even anger. Embracing a vibrant cultural life, respecting heritage and welcoming tourism, Queensland’s capital Brisbane’s inner city now has an amazing array of contemporary sculptures dotted throughout its streets and public parks.

Brisbane built environment developers are required to allocate 0.25% of the total project cost to providing public art. Art in this context is viewed as a valuable asset, providing economic benefits in tourism for this visually dynamic city.

From famed football player Wally Lewis, to colonial characters and a guy who is part kangaroo, reindeer and backpacker, much of the public art at Brisbane never fails to turn heads, while making a mark on the streetscape.

The great silver hands that went up outside out 175 Eagle Street in 2002 were quickly named by the public for an infamous local rugby league football player who would not keep his hands to himself. 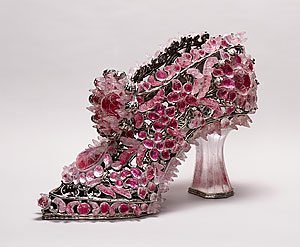 As someone who collected antique glass for a long period of my life, discovering that there is now a flourishing contemporary Australian glass art movement was a delightful surprise.

Glass is such a superb medium for innovation and the imagination to take full flight, as it is so fluid, allowing great freedom for the artist to create wonderful forms and shapes.

The techniques attached to its manufacture have expanded and the artist can now add great depth to its production that fascinate, captivate and attract collectors who are also interested in the integrity of the material and the level of excellence attained. 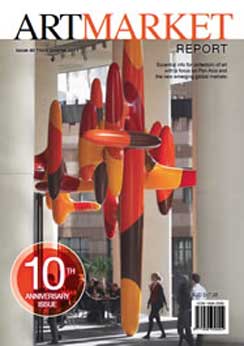 Art is an outward and free expression of an individual’s innermost thoughts, their imagination and, the depths of emotion attached to our humanity. It is about our cultural development, including how we interact and engage with each other and the natural and built environment.

Alison Harper founder of the ArtMarket Report was a former director of the Australian operation of London’s Phillips Fine Art Auctioneers from 1985 – 1995 as the world of art went from boom to bust and back again. Her passion and commitment to produce a quality magazine full of interesting articles, reviews and expose’s about artists and the industry is to be commended.

The ArtMarket Report is contributing magnificently to the flow of information and providing a point in the market for those looking to purchase a work that will give them enjoyment for the foreseeable future.

Your next important acquisition should be a subscription. It will keep a smile on your dial in the long term while returning a maximum profit, expanding your knowledge of art and culture.

By the time of Pope Gregory 1 (540 – 604), there was a distinct appreciation of fine singing and a genuine regard for the beautiful voice. Pope Gregory re-organized the liturgy and its music, influencing the establishment of an schola cantorum, a choir that executed psalmody, the singing of psalms…