An old ancient eastern observation is that ‘Calligraphy reveals the person’, calligraphy being an especially highly decorative form of handwriting and a most revered art form.

Organized by John Carpenter, Curator in the Department of Asian Art at the Metropolitan Museum of Art, New York, the exhibition now showing Brush Writing in the Arts of Japan is all about the perception that how, through creative innovation, someone’s handwriting style can convey one’s literary education, cultural refinement and carefully nurtured aesthetic sensibilities.

Works on view date from the 11th century to the present day demonstrate that the supreme motive behind the art of handwriting was beauty. They are complimented by some 100 ceramics, textiles, lacquers, woodblock prints and illustrated books all of which relate to the beauty of brush writing.

The focus on beauty sometimes meant that the writing itself became barely legible in some cases. The Japanese however, have highly valued the ‘look’ or the aesthetic above all else for centuries in all their art forms from ceramics to gardening.

Calligraphy is another of the art forms the Japanese inherited from China, which for centuries has been a ‘cultural catalyst’ in the Far East from one country to another, from one ware to another and, from one medium to another.

China dominated its neighbours, its influences eventually eddying strongly to Europe, originally through the near and Middle East, though eventually directly via the East India companies established by the English and the Dutch. 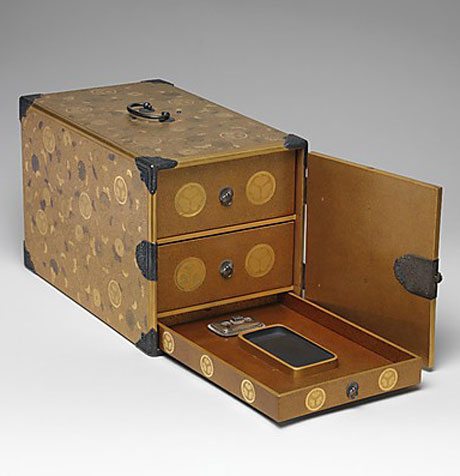 According to a Chinese adage “Knowledge comes from seeing much” a particularly relevant comment for students of art.

While some aspects of Chinese history may seem a little obscure to people in the west it is however their art and trade wares that have always attracted a great fascination.

Historians and the Han Chinese consider the Ming period from 1368 to 1644 as the last great dynasty that was really Chinese. It seems relatively near and modern in the long context of Chinese history.

In 1368 when it began, many scholars consider the supreme periods of their major arts including literature, calligraphy and painting had already passed

Chinese poetry informed Japanese court culture from the earliest times. It also served as an inspiration for painters and calligraphers through the ages.

Integrated with the permanent installation of ancient Buddhist and Shinto sculpture in the Arts of Japan galleries at the Metropolitan Museum of Art, New York, a splendid array of religious narrative paintings and mandalas that juxtapose text and image to convey sacred messages is revealed.

It was believed that copying such narratives, or sutras, or having them copied by others would bestow religious merit. This meant that no expense was spared in creating editions of sutras.

The magical efficacy ascribed to the transcription of Buddhist teachings in ancient Japan laid a foundation for the reverence of the written word.

Works on view in this section include essential Buddhist scriptures, which were transcribed in glittering gold and silver pigments on indigo dyed papers. Shimmering frontispieces that attest to the importance placed on the brush-written word accompany them. Ink paintings of Chinese-style landscapes were cherished by court and warrior elites in pre-modern times and often were accompanied by poetic inscriptions. During the Edo period Ike Taiga, one of Japan’s most prolific literati artists, excelled in a special calligraphic style called karay?, or Chinese-style calligraphy.

The moon sets, crows sing, and frost fills the sky.
Maple trees along the river and fires in fishing boats
face me, sleepless with lament.
The bell of Cold Mountain Temple outside Suzhou tolls,
At midnight, the sound reaches this boat.

One exquisite kimono is embellished with a poem brilliantly embroidered in silk and as well there is a warrior’s campaign jacket with brushed ink characters. They both ably demonstrate how textiles were used to present calligraphy as a decorative art form.

One room will offer a view of rare privately published prints and illustrated books on poetic themes and the show concludes with a selection of contemporary prints and calligraphy; among them is a work by Shinoda Toko (b. 1913), who is celebrating her 100th birthday this year.

Brush Writing in the Arts of Japan The Sackler Wing Galleries for the Arts of Japan, Galleries 223–232

A variety of education programs will take place in conjunction with the exhibition. These include exhibition tours, a bookmaking studio workshop, and a How Did They Do That? weekend program for all ages.

As it is Dream Week 2013, $1 from every lipstick sold at Myer and David Jones Australia wide until the 14th of September, is donated to Look Good Feel Better, I thought it might be the perfect opportunity to offer some do’s and don’ts, tips and tricks for ultimate lips!…