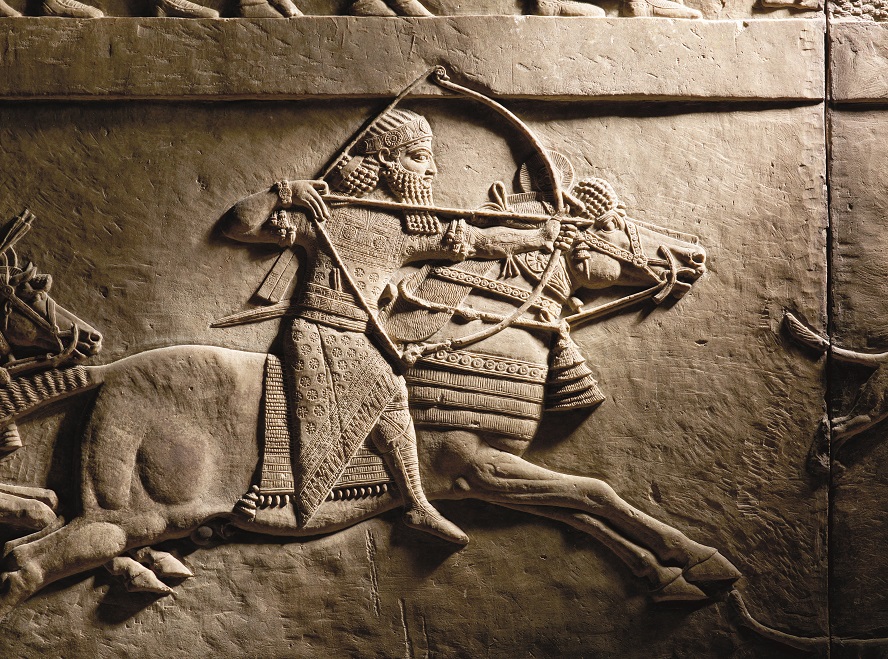 Relief detail of Ashurbanipal hunting on horseback, Nineveh, Assyria, 645 -635 BC courtesy and ©The Trustees of the British Museum

I am Ashurbanipal: King of the World, King of Assyria is an informative and important exhibition now on show at the British Museum until February 24, 2019.

In ancient times, King Ashurbanipal (668 to 627 BCE) ruled a vast and diverse empire, shaping the lives of peoples from the shores of the eastern Mediterranean to the mountains of western Iran. Unlike his predecessors, Ashurbanipal, King of Assyria, who reigned from his court at Nineveh, the last capital of the Assyrian Empire, had the ability to read, write and debate with expert scholars. He is unique in the ancient world. 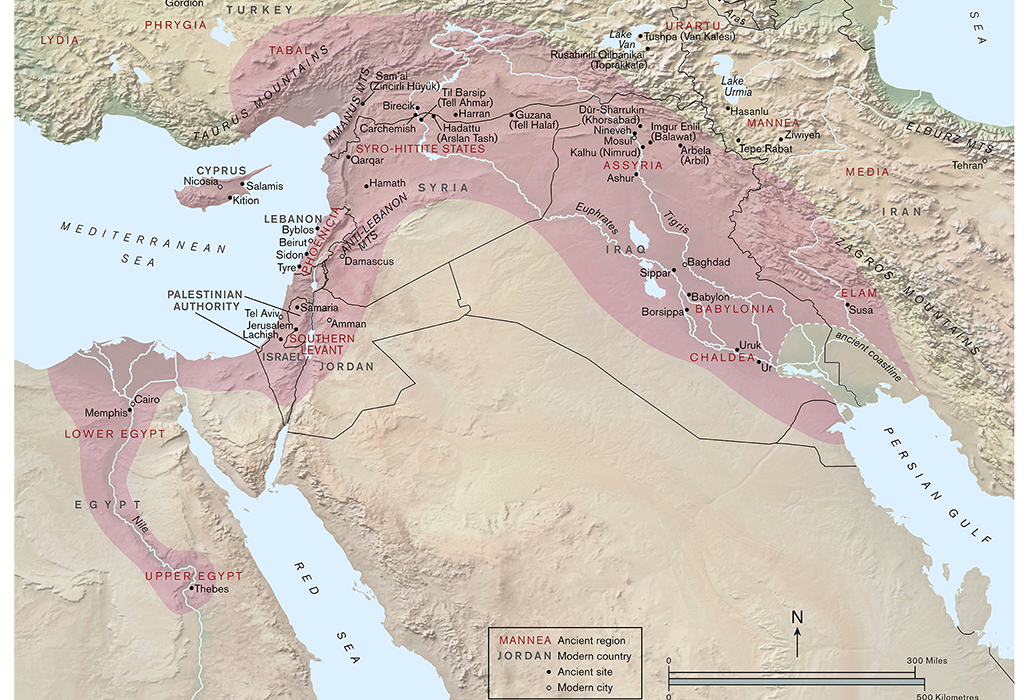 A map showing the extent of the Assyrian empire (in pink). Map produced by Paul Goodhead

The exhibition tells Ashurbanipal’s remarkable story through the vivid narratives gleaned from the hundreds of cuneiform texts that survive. We are informed by the remains of his extensive library and by the wealth of objects discovered by archaeologists working in the region. 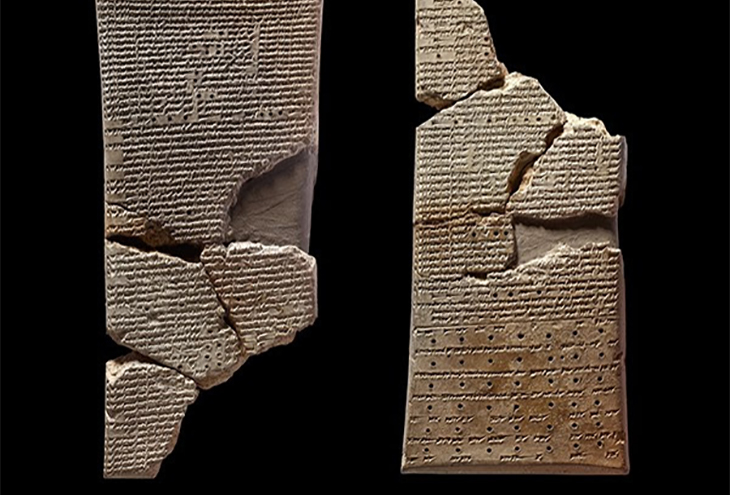 The invention of writing during the 3rd Millennium BCE at Sumer, represents the greatest single milestone in the emergence of civilisation in our world today. The ability to record information in a retrievable form facilitated activities became essential to urban life. 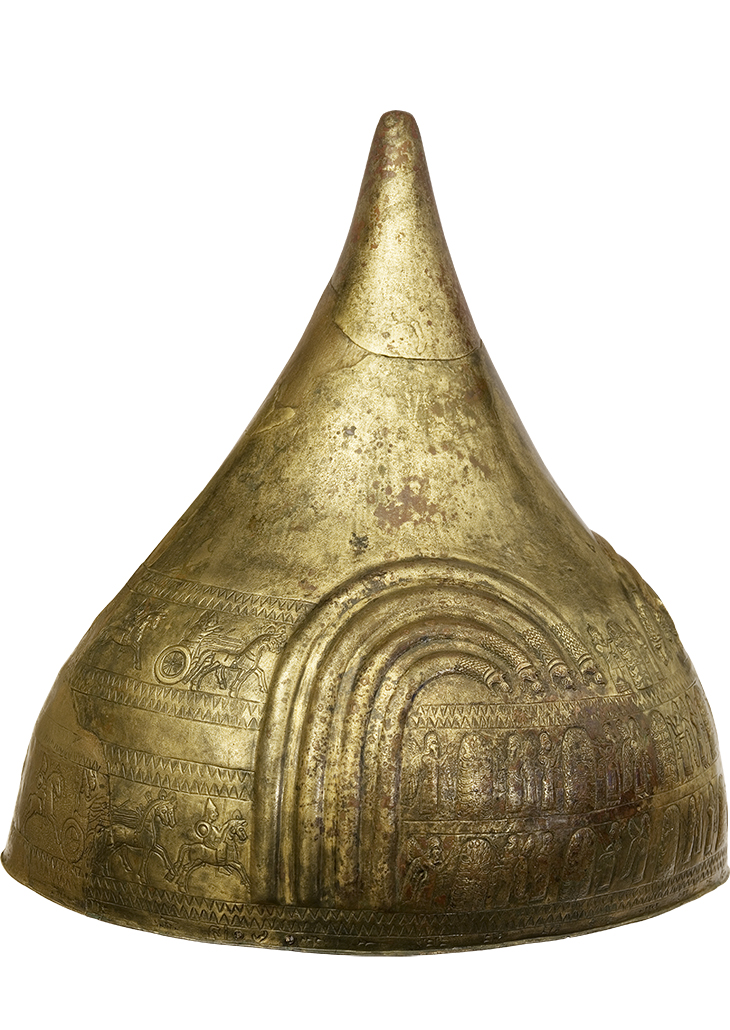 The display will bring to life the tumultuous story of Ashurbanipal’s reign; his conquest of Egypt, crushing defeat of his rebellious older brother, and ruthless campaigns against those who defied his rule.

The King’s prowess as a valiant warrior was also recorded on a series of vividly carved reliefs in the British Museum’s collection that depict the royal lion hunt, drama-filled public spectacles staged within the hunting grounds at Nineveh. 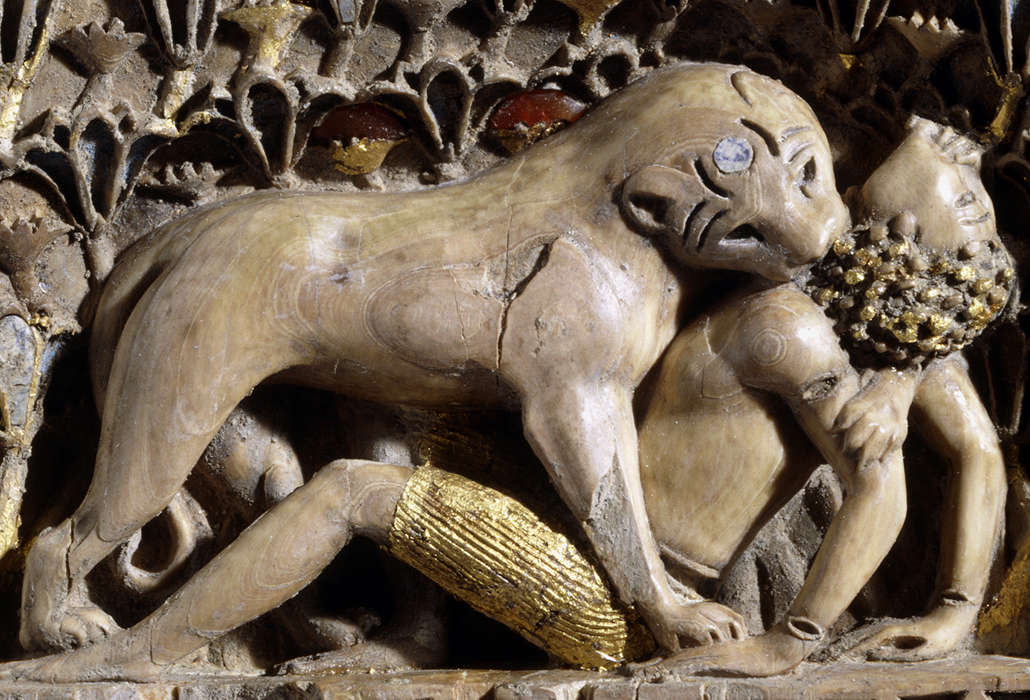 Detail: Lioness plaque: Ivory plaque of a lioness mauling a man, ivory, gold, cornelian, lapis lazuli, Nimrud, 900BC – 700BC © The Trustees of the British Museum

Hartwig Fischer, Director of the British Museum, said…”This exhibition will bring visitors face to face with a king whose reign shaped the history of the ancient world. Temporary exhibitions of this nature are only possible with external support. I am hugely thankful for BP’s long-term commitment to supporting exhibitions at the British Museum. I would also like to express my gratitude to the show’s logistics partner IAG Cargo who are safely transporting some of incredible loan objects from across the world to London to share with our global audience.” 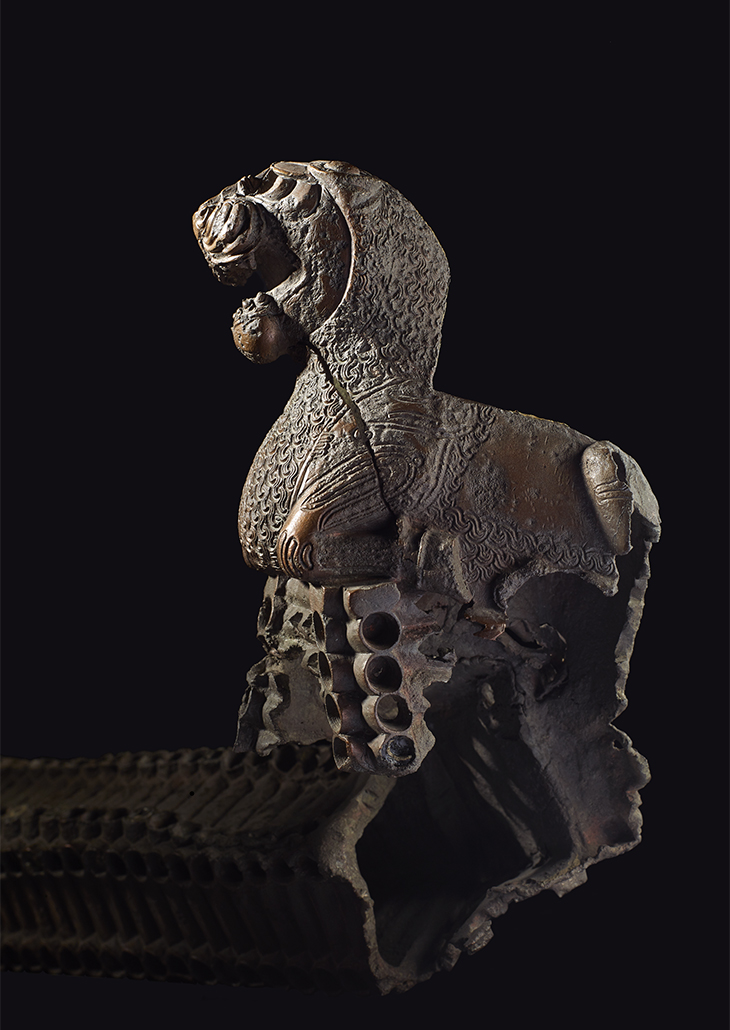 Bronze Lion, Furniture fitting topped by a recumbent lion, bronze, Toprakkale, 9th century BC © The Trustees of the British Museum

Gareth Brereton, exhibition curator, said, “This autumn, the British Museum will reveal the history of Ashurbanipal, the greatest king you’ve never heard of… as present day Iraq looks to recover the history of damaged sites at Nineveh and Nimrud, this exhibition allows us to appreciate and relive the great achievements of an ancient world and celebrate its legacy.”

The exhibition has been planned to transport the viewer back to ancient times in Iraq during the seventh century before the Christ Event. This is when King Ashurbanipal became the most powerful person on earth.

Carved magnesite statue of Ashurnasirpal II on reddish dolomite stand: the king stands bare-headed, without the royal crown. His hair is long, but his long and magnificent curled beard is more imposing that that which a courtier would have worn. The king’s dress consists of a short-sleeved tunic on top of which a long fringed shawl has been fastened, covering most of his body

Over 200 extraordinary objects will reveal how one of the greatest Assyrian monarchs stamped an indelible mark on the history of the world.

The only extant perfect Assyrian royal statue in the round is of King Ashurnasirpal II.

The curator comments ‘… it was placed in the Temple of Ishtar Sharrat-niphi….designed to remind the goddess Ishtar of the king’s piety. The king’s hair and beard are shown worn long in the fashion of the Assyrian court at this time. It has been suggested the Assyrians used false hair and beards, as the Egyptians sometimes did, but there is no evidence for this.

Unique objects such as this statue will come from the museum’s impressive collection of ancient Assyrian works, showcased alongside collections of the History Museum of Armenia, Yerevan; the Musée du Louvre, Paris; the Vorderasiatisches Museum, in Berlin; the State Hermitage Museum, St Petersburg; the Museo Gregoriano Etrusco, Musei Vaticani, Vatican City; and the Cyprus Museum, Nicosia.

Many of these remarkable objects have never travelled to the UK before.

The first mention of Assyria is extremely ancient – Genesis 2:14 speaks of the region in relation to the Garden of Eden. Although founded as early as 1700 B.C.E, the Assyrian Empire was at the height of its influence during the period c. 967 BCE – 612 BCE when it was finally overrun, its fabulous cities destroyed by the Persians.

The so called Flood Tablet dates from 650 BCE from the Palace of Ashurbanipal, at Nineveh in Assyria (northern Iraq).

Of all the thousands of tablets found in the libraries of the Assyrian kings at Nineveh, none caused such a sensation as it did when a young assistant in the British Museum in 1872 came across this fragment among 20,0000 others. 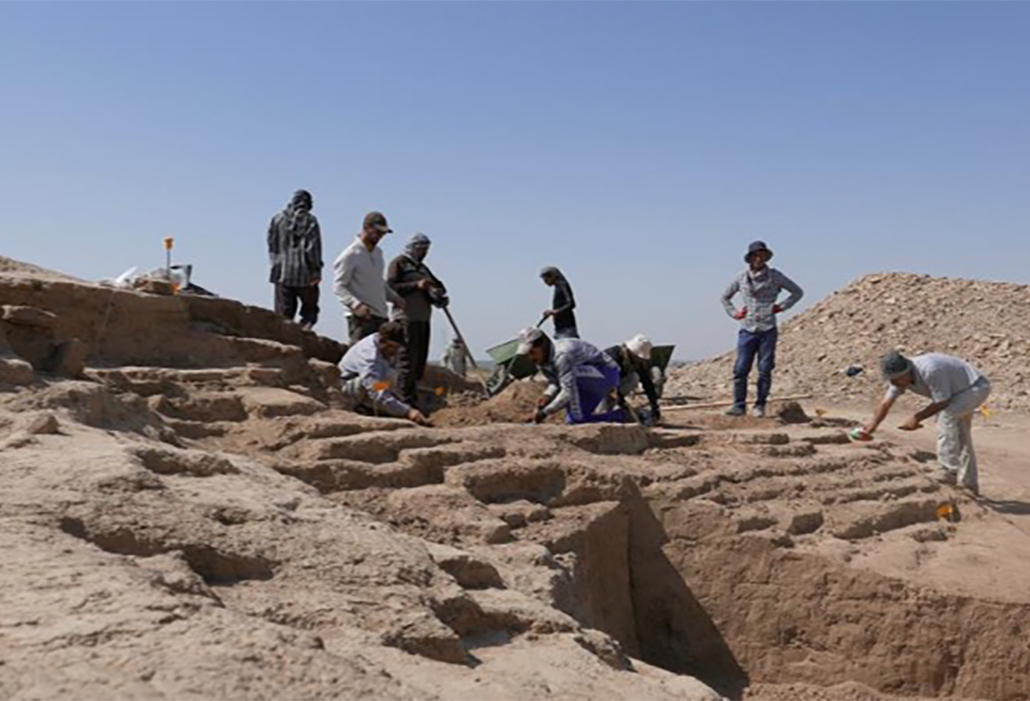 It was a ‘curious tablet that evidently contained originally six columns.  ‘… on looking down the third column my eye caught the statement about the ship resting on the mountains of Nizir, followed by the account of the sending forth of the dove and its final resting place … I saw at once I had discovered a portion at least of the Chaldean (Babylonian) account of the Deluge’. 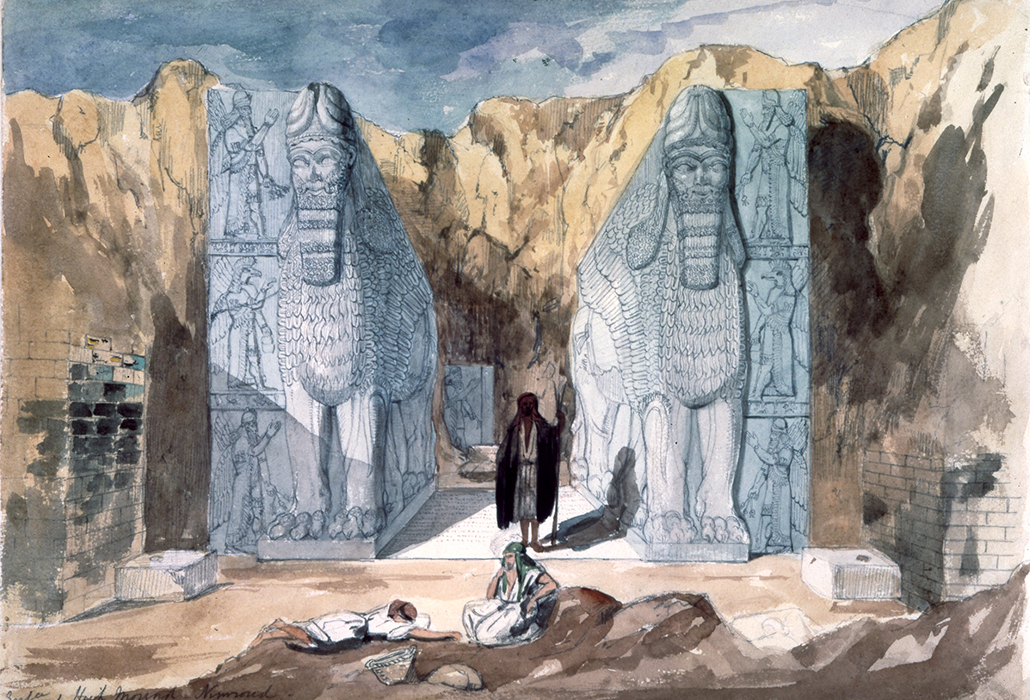 Archaeologists a half century later went looking for evidence of the deluge in excavations at Sumerian sites and found it; thick layers of water borne silt sandwiched between the remains of successive settlements. 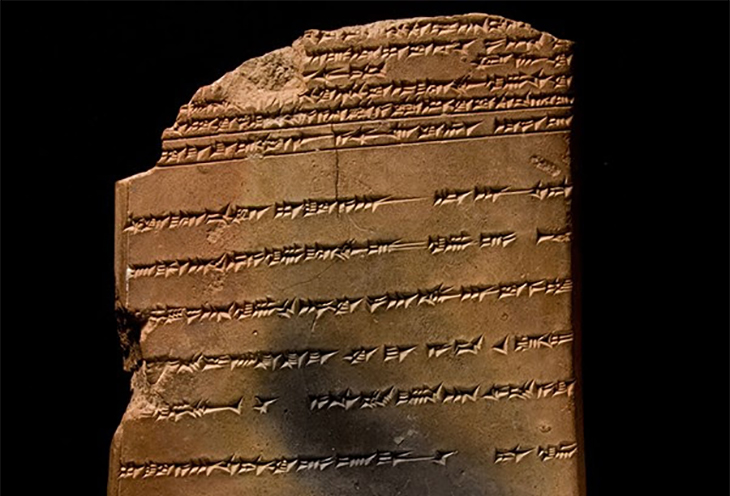 Tablet from the Library of Ashurbanipal, with a cuneiform note recording the tablet belonged to the collection of ‘Ashurbanipal, King of the World, King of Assyria’. Nineveh, Iraq, courtesy British Museum

Like many modern libraries the library of Ashurbanipal was divided into rooms for subjects such as history and government, religion and magic and, geography, science and poetry. Knowledge was power to the King and his library was a practical tool that helped him to manage his empire. 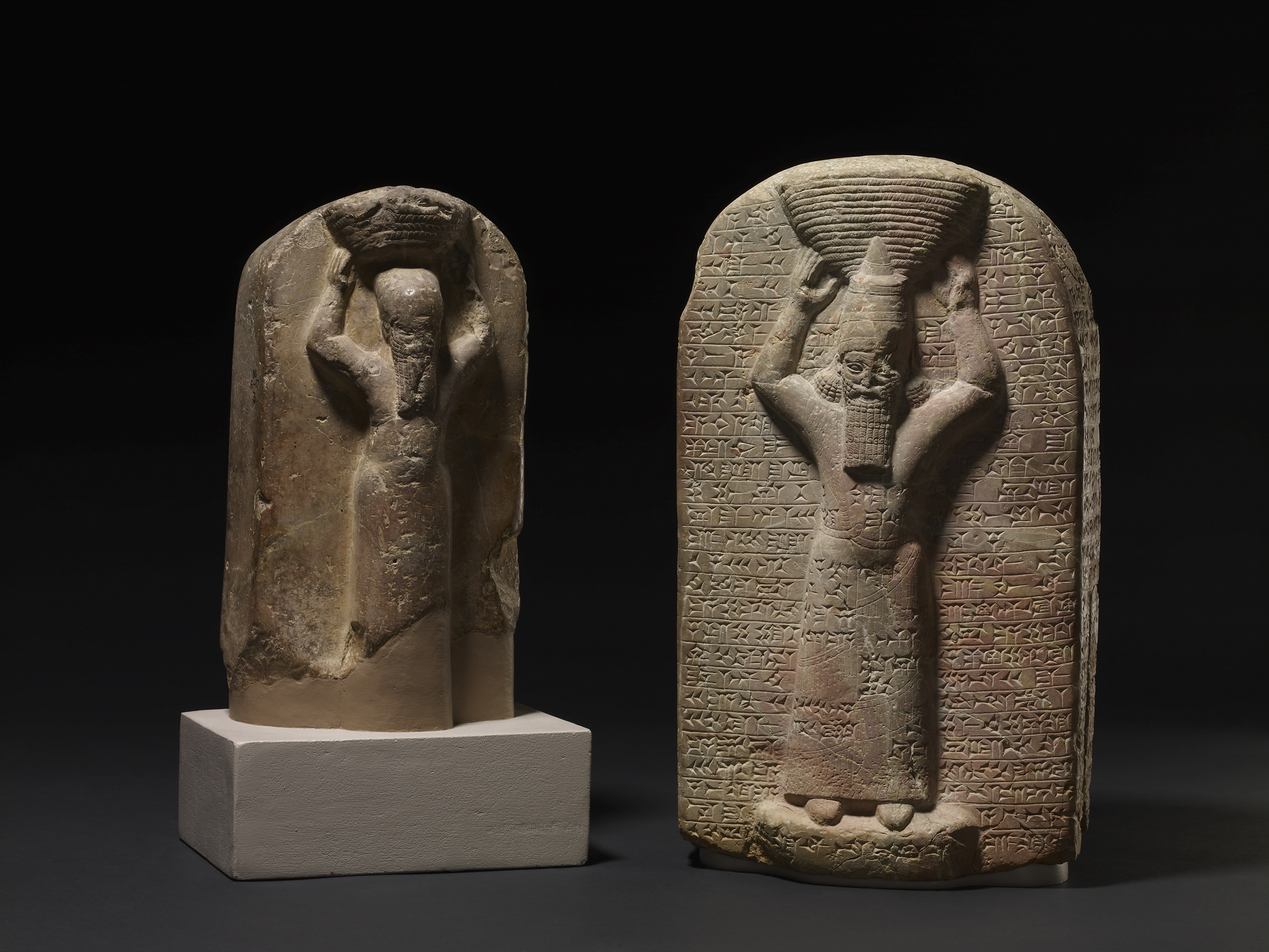 Using the British Museum’s world-renowned collection of documents dating to Ashurbanipal’s reign, the exhibition will recreate the king’s great library to evoke its scale and present its contents and significance.

One of the most important poems in world history is the so-called Epic of Gilgamesh, a heroic tale rooted in the ancient wisdom-tradition of mankind, known from the fragments recovered in 1853 by British archaeologists from the King’s library. 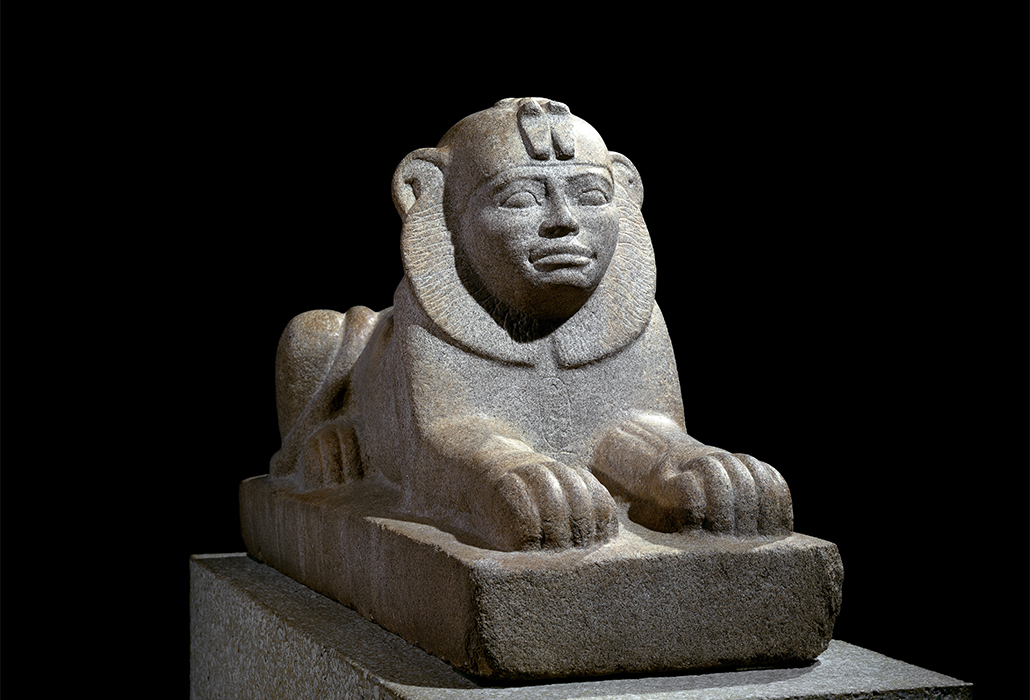 Granite sphinx of Taharqo, Kawa, Sudan, c. 680 BC © The Trustees of the British Museum Iraq scheme

Its varied versions in Akkadian (the Semitic language, related to Hebrew, spoken by the Babylonians) in Hurrian and Hittite (an Indo-European language, a family of languages which includes Greek and English, spoken in Asia Minor) may be interpreted on several levels. 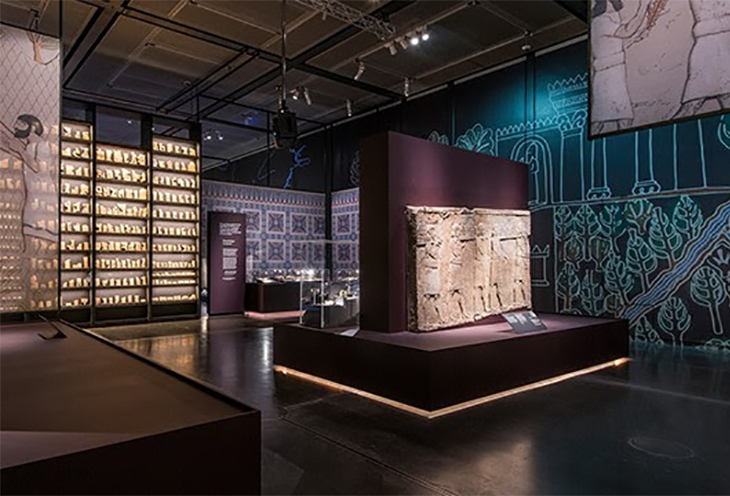 Objects from the Library on display inside The BP exhibition I am Ashurbanipal: king of the world, king of Assyria courtesy British Museum

Modern archaeologists have found a great deal of relevance to both ancient sites and cultural practices in its prose. At its heart are the human themes of friendship and courage needed in abundance to gain the skills necessary to deal with the finality of death while learning about, and searching for, the meaning of life. 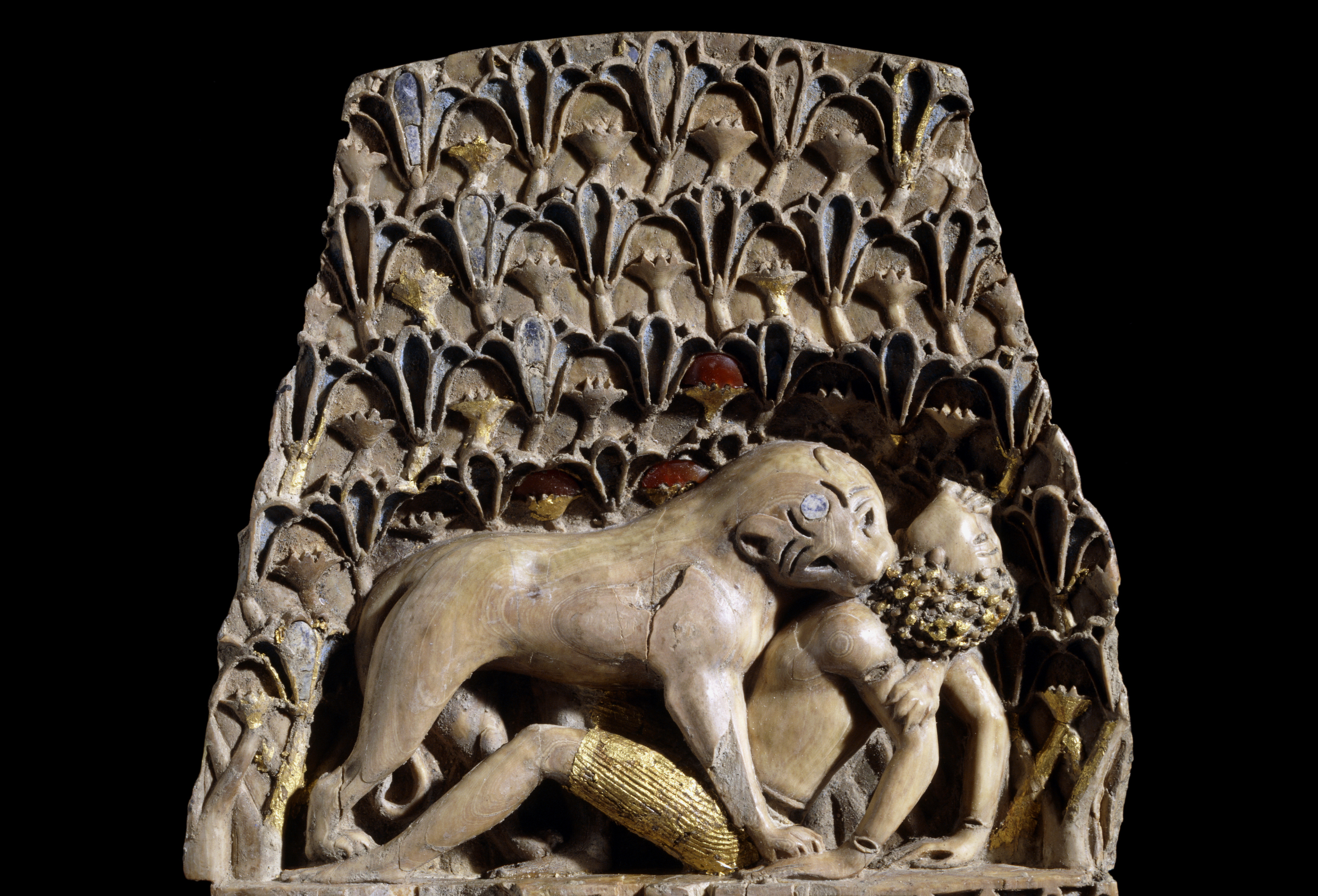 The BP exhibition
I am Ashurbanipal: king of the world, king of Assyria