The discovery in the north along the Tigris River in the Middle East of evidence of the Assyrian Empire was one of the most famous archaeological discoveries of the period between 1840 and 1850.

Opening September 22, 2014 at The Metropolitan Museum of Art in New York will be a landmark exhibition, curated by Joan Aruz from the Department of Ancient Near Eastern Art.

The show will trace the deep roots of interaction between the ancient Near East and the lands along the shores of the Mediterranean centuries when Assyria was a kingdom of northern Mesopotamia.

Assyria to Iberia at the Dawn of the Classical Age will showcase 260 works of art on loan from major collections in Western Europe, the Caucasus, the Middle East, North Africa, and the United States.

English archaeologist Austen Layard uncovered a large part of palaces and rooms of the Kings Ashurnasirpal II at Calah and Sennacherib at Kuyunjik at the Assyrian capitals of Nimrud (biblical Calah) and Nineveh in 1844.

Nineveh had mercantile connections along the northern coast of Africa, the southern coast of Europe to the Straits of Gibralter and beyond. Within six years it revealed 25,000 tablets covered in cuneiform characters, one of the earliest forms of writing.

Archaelogical finds in Assyria were very different from the ongoing excavations taking place in Egypt and other classical lands at the time. All the finds literally caused a sensation in England and Europe.

Assyria it was found had first emerged as an independent state fourteen centuries before the Christ event and Assyrian Kings had laid out great hunting parks on the banks of the Tigris River. A sculptural relief from the palace of Ashurnasirpal II, Nimrud, Assyria (northern Iraq) dating from 874-860 BCE depicts the King of Assyria who reigned from 883 BCE for 25 years.

This was at a time when Assyria was indisputably the greatest power in the ancient world.

The event was documented by an inscription that read: “…the happy people of all the lands together with the people of Kalhu—for ten days I feasted, wined, bathed, and honored them and sent them back to their home in peace and joy.” While this all sounds delightful, at the time his name also inspired dread and fear from the shores of the Eastern Mediterranean to Persia.

A rare surviving example of Assyrian sculpture in the round, the statue of Assyrian King Ashurnasirpal II has an inscription in cuneiform characters on the torso.

It records the king’s campaigns in the west, reaching as far as the “Great Sea”, meaning the Mediterranean. The image of him, only one of a handful found, embodies the calculated frightfulness, which he developed to a fine art in warfare. One historian noted “There is no smile, no piety, almost no humanity …just the rigid attitude of a conceited despot, the aquiline nose of a bird of prey, the straight looking eyes of a chief who demands absolute obedience”.

Found at Nimrud, the site of his capital, his annals speak of rebel leaders ruthlessly flayed alive and their skins hung on the walls of Nineveh while some were burnt to death and others mutilated…

’I cut off their arms and hands, others their noses, ears and extremities. I gouged out the eyes of many troops. I made one pile of the living and one pile of the dead. I hung their heads on trees around the city. I burnt their adolescent boys and girls’…

The Assyrians were renowned as outstanding builders, as revealed by excavations at the archaeological sites at Nineveh, Ashur and Nimrüd. The lamassu or human headed winged bulls found were inscribed with the so-called Standard Inscription, which ran across the surface of most reliefs.

They described Ashurnasirpal’s palace: “I built thereon [a palace with] halls of cedar, cypress, juniper, boxwood, teak, terebinth, and tamarisk as my royal dwelling, and for the enduring leisure life of my lordship.”

This splendid example was excavated by Sir Austen Henry Layard; 1849, the ‘winged bull’ currently in The Metropolitan Museum of Art was presented by Austen Layard to Lady Charlotte Guest for Canford Manor, Dorsetshire, England; 1919.

It was purchased by Dikran Kelekian from Ivor Churchill Guest; 1927, and then purchased by J. D. Rockefeller who gifted it to the Museum in 1930 (but not accessioned until 1932).

Assyria was a conduit for ‘raw materials, luxury goods, image and ideas between the Near East and the area around the Mediterranean in the ancient world.

Here were the monuments to the very Assyrians who, as the Old Testament of The Holy Bible relates, descended with brutality on the people of Israel.

Reference in the exhibition will be made to relevant passages in the Bible, the epics of Homer, and all the other texts found on thousands of tablets, that concern historical people, places, customs, and events represented in the exhibition.

Parallels will be drawn between works in the exhibition and those in the Metropolitan Museum’s permanent collection of art works representing ancient near eastern art.

They represent the sophistication of the design and style that existed throughout the Near East and Mediterranean at the time. 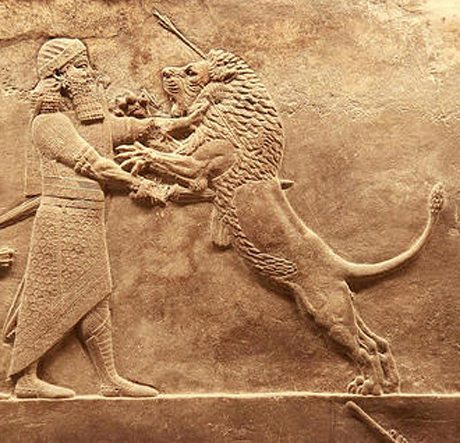 The show will address the world of the ancient Assyrians examining their impact on artistic traditions as they gradually developed in that region.

Mesopotamian kings throughout history prided themselves on their prowess as hunters and no victim proved their strength and bravery better than a lion who was the most challenging prey for a ruler of men.

The emphasis on the king and his exploits – doing battle or hunting, performing cultic ceremonies, or just reclining his garden was a departure in official Mesopotamian art, which had earlier focused mainly on the gods and their worship.

King Sennacherib succeeded his father in 705BCE – dying in 681 BCE). Sennacherib, King of Assyria (704-681 BC), whose name (Sin-ahhe-criba) means ‘the god Sin has replaced the brothers’, on a relief inscribed “Sennacherib, the mighty king, king of the country of Assyria, sitting on the throne of judgment, before (or at the entrance of) the city of Lachish (Lakhisha). I give permission for its slaughter” Neo-Assyrian, about 700-681 BC courtesy The British Museum, London

He was instrumental in various projects, including the making of the embankment of the Tigris River, canals and watercourses. His greatest achievement was the re-building of Ninevah in 700BCE.

He laid out a pleasure ground and nature reserve, as opposed to a hunting park, with figs, pomegranates and vines, probably grapes…A 7cBCEE relief from Ninevah shows a lioness resting under a pine tree garlanded with vines.

From the earliest times gardens were associated with shade, running water; fragrance and fresh produce and therefore represented peace and prosperity. Daisies grow under the tree and a Madonna lily is also recognisable on the far left, yet another beyond the lion on the right.

The lily would have been highly prized and probably came into Ninevah as an imported bulb from the countries around the eastern end of the Mediterranean. King Sennacherib had a deliberate policy of agricultural expansion.

He cultivated new areas and the state sponsored distribution of iron ploughs to the peasants.

On the other end of the scale he was at odds with many of his neighbours.

They included Hezekiah, King of Judah who became the ringleader in a revolt against Assyria.

He dug the Siloam tunnel, which brought the waters of the spring of Ghihon, underneath the hill of Jerusalem to a pool at the lower end of the city.

Gardens became an important aspect of all early civilisations and had great relevance in Assyria.

They emphasized the contrast between the two worlds we inhabit, our idealized world, the one in which man seeks to control his natural environment and the real world, where nature is in awe inspiring control.

By the end of the second millennium plant collecting was in fashion in Assyria. King Tiglath-Pilaser 1 (1114-1026 BC) wrote ‘Cedars and Box I have carried off from the countries I conquered, trees that none of the kings my fore-fathers possessed; these trees I have taken and planted in my own country, in Assyria’. The reeds grew to a height of 7.5 metres and were introduced by the Assyrians to areas around the more northern cities where they established hunting parks and landscaped gardens.

The reeds were a source of building material for boats and mats.

They also provided fodder and fuel as well as cover for wild life.

During the late 7th century Scythians, Medes and the Babylonians humbled the proud Assyrian nation.

They destroyed Nineveh and its gardens, which were abandoned, the city becoming a series of ruined mounds.

Lion from Babylon, detail from the remains of Ishtar Gate, constructed in about 575 BC by order of King Nebuchadnezzar II on the north side of the city of Babylon, now reconstructed in the Pergamon Museum, Berlin

With the collapse of the Assyrian Empire Babylon began its rise, its greatest King Nebuchadnezzar II (Nabû-kudurri-usur c.605 BC – 562 BC) was responsible for defeating the Assyrians.

He rebuilt Babylon in impressive splendour.

Massive walls and splendid gates surrounded the city and included the famous Ishtar Gate built on the north side of city by the King who was believed to have also constructed the famous hanging gardens.

The site for them however is disputed in historical records some saying that the famed ‘hanging gardens’ were really to be found with the Assyrians at Nineveh.

Assyria to Iberia at the Dawn of the Classical Age 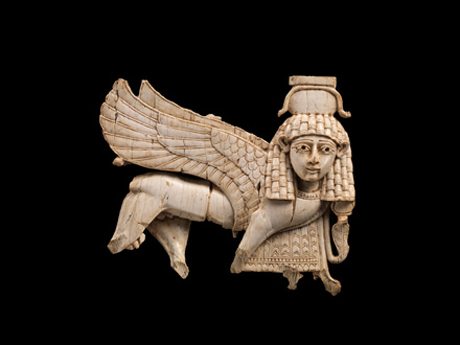 The exhibition will be accompanied by a copiously illustrated catalogue, suitable for students, scholars, and the general public. Edited by Joan Aruz, Curator in Charge, and Yelena Rakic, Associate Curator, and Sarah Graff, Assistant Curator, all of the Metropolitan Museum’s Department of Ancient Near Eastern Art, the book includes essays by experts in ancient Near Eastern and Mediterranean art and culture from leading museums, universities, and other research institutions worldwide.

Published by the Metropolitan Museum and distributed by Yale University Press, the catalogue will be available in the Museum’s book shops. The catalogue is made possible by The Andrew W. Mellon Foundation, The Hagop Kevorkian Fund, and the A. G. Leventis Foundation.

This is the third in a series of major Metropolitan Museum exhibitions, with related catalogues, focusing on art and regional interconnections during specific eras in the history of the ancient Near East.

The first exhibition, Art of the First Cities: The Third Millennium B.C. from the Mediterranean to the Indus, was shown in 2003, and the second, Beyond Babylon: Art, Trade, and Diplomacy in the Second Millennium B.C., in
2008–2009.

Together, their catalogues will form an authoritative survey of art and interaction across three millennia of ancient Near Eastern history.
A series of education programs has been organized to complement the exhibition. These include programs for children and families, gallery talks, lectures, a Sunday at the Met program, and a workshop for K-12 educators. The academic program will include a two-day symposium with leading international scholars in the field, a scholars’ day, and a series of lectures by specialists.

The symposium is made possible by The Charles K. Wilkinson Lecture Series fund.