“Recently I died…and, in that moment of death I had a vision, like a dream. In this vision I was carried in the talon of a barn owl over the foggy night to Merrigum on the little plain. This dream is the origin of Bird Voice” said painter John Anderson, who is returning to Brisbane after an absence of two years. During that time he has been living a quiet life in his chez villa in the beautiful countryside of northern Victoria.

Dwelling alongside the native wildlife and, most especially with the barn owls and the other birds who frequent his beautiful rural hideaway in this lovely state, John is also nearby to the delightful town of Shepparton where he can also, from time to time, grab a latte and meet with friends who inspire him.

“The exhibition is a journey of survival” says John, “not just my own but the survival of our diminishing numbers of native birds”. So in order to heed their call, and give them a voice he has recorded them on canvas.

Meeting John recently for the first time I was able to gain an understanding of just how passionate he is about the encounters of the first kind, with birds and other wildlife,  he has been enjoying over the past few years.

He and fellow Brisbane artist, Amelia Batchelor, were in Melbourne a few weeks ago exploring various opportunities that exist in this city, whose cultural ideal is enshrined in art. He generously gave me a preview of a few favourite pieces he was busy finalizing for this exhibition and I have to say Brisbane buyers are in for a real treat.

John’s lively style, attention to detail and infusion of colours is really quite spectacular. And, he offers the viewer an opportunity to gain an understanding of the complexity of each species of native Australian bird and their surrounds.

Victoria has a diversity of habitats for native birds and some of the specialties of the region are listed on the site of Birds Australia, which reports too that since the 70’s Lorikeets have been moving into Melbourne suburbs. The outstanding ability of birds to evolve and deal with the changing of their local habitat is really amazing and it is good that artists like John are able to assist raise awareness and also to provide an important record of how they are now.

John follows in the footsteps of other passionate painters of birds, such as the rock artist whose work was only recently discovered (June 2010) in northern Australia, of a bird that went extinct some 40,000 + years ago. And then there is the bird painters of our colonized history, including Ellis Rowan, who on the 24th August 1923 caused a sensation when her works went up for sale and the Australian House of Representatives were forced to debate the question “What is Art”, to save them being binned. Rowan helped many Australians connect with their rich heritage wildlife for the first time. 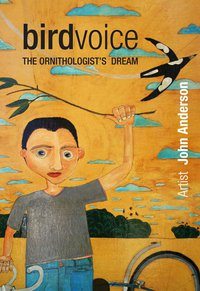 Artist John Anderson’s new Exhibition ‘Bird Voice – The Ornithologist’s Dream’ confirms his enthusiasm for the beauty of the Australian landscape. He has recorded his delight for future generations and, before many of its beautiful birds become extinct or disappear beneath the onslaught of civilization.

Napoleon – destiny power and passion – the legend comes alive in the Melbourne Winter Masterpieces Exhibition 2012 at the NGV (National Gallery Victoria). The show Napoleon: Revolution to Empire is sure to engage all observers, who will more than likely be completely overwhelmed at the magnificence and quality of the over 500 art works and objet d’art featured.