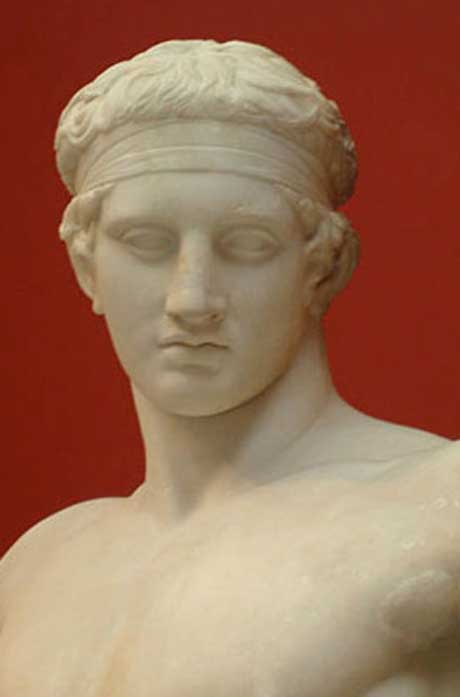 During the fifth and fourth centuries before the Christ event Greek influence extended from Spain to Syria, and from southern Russia to the coast of Libya.

During the Hellenistic period that followed, it spread eastward to India and south to the Sudan. But it is the area focused on the Aegean Sea, Greece, the Greek islands and the Turkish coast that today we associate with the greatest days and most splendid achievements of Greek civilisation.

At Athens on the mainland we find the ancient Greek philosopher Aristotle (384-322 BC) who said ‘the aim of art is to represent not the outward appearance of things, but their inward significance’.

He noted that temples, sculpture, and paintings reflected the individual tastes of their creators and patrons, an idea that opened the way for their being considered ‘works of art’ rather than just religious ritual or political images.

The romantic ideal of ancient Greece as a centre for youth, energy, toleration and intellectual freedom, a place where beauty and nature came together as a flawless entity is true. However it does ignore all the other uncomfortable facts of life at that time.

But this is how it is with memories of those who have passed on, that in time it is only their goodness we remember and as we go on a journey in search of an Arcadian ideal that never was real.

…The shortest and surest way to live with honor in the world is to be in reality what we would appear to be; and if we observe, we shall find, that all human virtues increase and strengthen themselves by the practice of them. Socrates (469-399 BC) In defining civilisation we discover that early societies developed writing so they would be able to accumulate ideas and knowledge about traditions they had established.

As well, they wanted to record experiences of the past to assist them to continually refine their conceptions so that they could secure the future of their culture and its people.

The Aegean area in ancient times played an historical role for that of intermediary between western Asia and Europe.

Documentary evidence amassed by archaeologists during the 20th century established that the Greek peoples have occupied the land mass we now know as Greece since fourteen centuries before the Christ event and that the islands of Crete, Rhodes and Cyprus were only but stepping-stones to both Syria and Egypt In ancient times the islands of the Aegean Sea played a vital, and pivotal role as an intermediary between Egypt, western Asia and Europe. Greek men bearing gifts are mentioned in hieroglyphics on southern Egyptian wall paintings from c1500 BC.

One of the gifts they brought was a mineral called emery, one of the most durable stones in the world. It was used for polishing hard surfaces, including the steel blades of weaponry.

Emery was mined on the island of Naxos which was the largest of all the islands that made up the Cyclades island group. It was at the very centre of the archaic Cycladic culture, which archaeologists tell us spanned a period 3000 – 2000 BCE. The islands in the group were only just able to sustain the life of a certain amount of people.

Eventually the rapid growth of Greek civilization on nearby larger islands, and the mainland meant that people from the islands would merge with mainland Greeks and evolve as one. Naxos was not far from Crete and references made in written inscriptions in Egypt about the people of Crete seem to point to the enormous capabilities of its seafaring peoples. ‘There is a land called Crete in the midst of the wine-dark sea, a fair rich land, surrounded by water, and there are many men in it, past counting, and ninety cities. They have not all the same speech; their tongues are mixed…among their cities is the great city Knossos, where Minos reigned when nine years old, he that held converse with great (God) Zeus.’ 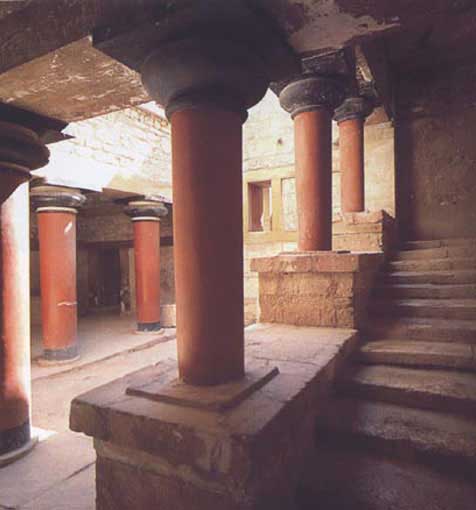 Crete’s economy was founded on agriculture, manufacturing and shipping with extensive trade routes covering territories as far away as Turkey, Afghanistan, Britain, Scandinavia, the Cyclades and the rest of the Greek world.

The name Minoan, like many other stylistic names, was only applied to the epochs and eras of societal and cultural development during the nineteenth century. It was applied to the civilization and culture on the island of Crete from around 2600 – c1150 BCE.

The remains of the ancient city of Knossos were re-discovered in 1878 by a local merchant. But it was the British academic Sir Arthur J. Evans who was invited by Greek authorities to excavate the palace of Knossos starting in 1899.

Very little was known about Crete and the Minoan peoples before the excavation of its palaces. They were found to be a peace loving society, which survived without the protection of defensive city walls for over 1500 years. Reconstruction of the Palace of Knossos

This was a significant feat and it reached a high point in its prosperity before being virtually wiped out around 1150 BCE when a great psunami deluged the island following a massive earthquake.

The Kings of the Minoan civilisation on Crete ruled a very affluent society, which exported its excess agricultural surplus and imported exotic luxuries from Egypt and Syria.nThe Minoans also established great palace complexes on the island of Crete at Knossos, Phaestos, Malia and Zakros. The connection between economy and religion is completely understandable when we realise that the Minoans depended on agriculture as the foundation of their economy and the evidence found by Evans proved they had traded widely.

Religion was very important because the king or priest had to mediate between his people and the Gods if they were all to have a good harvest and a good life.

Evans uniquely turned, what had previously been considered mythology, into authentic history, strengthening this belief by connecting the scenes in ‘Minoan’ paintings on the walls of their palaces to scenes from the Greek myths and many reconstructions of its unique and colourful decorations have been rendered.

Evans informed the world of his discoveries at Knossos through articles written for different journals, as well as The Times Newspaper at London which reported after his death “Sir Arthur John Evans excavated the ruins of the ancient city of Knossos in Crete and uncovered evidence of a sophisticated Bronze Age civilization, which he named Minoan. His work was one of archaeology’s major achievements and he greatly advanced the study of European and eastern Mediterranean prehistory.”

This type of exposure was an important aspect of the successful reporting of the site. As Evans and his team progressed, the public enjoyed the mythical and mysterious quality of his reports.

“Everything around…the dark passages, the lifelike figures surviving from an older world… would conspire to produce a sense of the supernatural. It was haunted ground, and then, as now, “phantasms were about. The later stories of the grisly king and his man-eating bull sprang, as it were, from the soil, and the whole site called forth a superstitious awe…