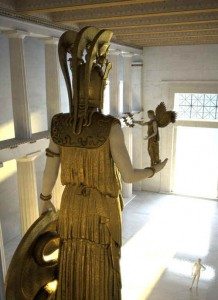 The most splendid of cities in the Greek classical world was Athens. whose streets sprawled haphazardly around the rock mass of the Acropolis (high place). It was a citadel and sacred precinct containing most of the cities most illustrious shrines and temples. Approximately 150 meters wide by 300 meters long the main axis was from east to west and it fell away steeply on the other three sides. At the centre of the Parthenon stood a 12-metre high great gold and ivory cult image created by Phidias of the cities patron Athena, Goddess of War and Patron of the Arts. The Temple was built to house her illustrious person. Celebrations to her took place on an altar outside the building. On her head Athena wore a triple crested helmet, in her right hand she held Nike the statue of victory and at her left side was a shield and sacred serpent. Armed with spear and aegis (a goatskin short coat) her armour feature a gorgon head at the centre with a fringe of snakes. Athena was patroness of spinning, weaving, embroidery and other similar household activities practiced by women. Her combination of ingenuity and warlike spirit led her to invent the war chariot. She was also blessed for the introduction of the olive tree. Her favourite animal was the owl and she is described traditionally as the goddess with grey eyes. A Virgin goddess, she also had a son through divine intervention.

The Kitchen Sink at the Ensemble Theatre a comedy with amusing incidents humorous conversations and ludicrous plumbing errors is hilariously touching, says Rose