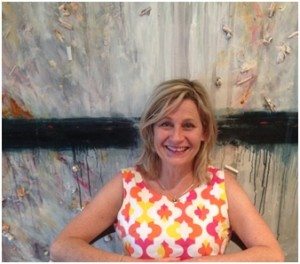 Elizabeth (Liz) Sullivan from Melbourne describes herself as an emerging old artist, whose current interest lies in the power of water; transcendental, contemplative, meditative and timeless. In reality Liz has been painting landscapes in various forms for over thirty years. Her techniques have taken a number of turns; from flat colour contrasting (with layered wax and paint) to experimenting with the combination of organic bark shapes and linear movement of wire and other three dimensional forms.There is a rich heritage of 20th century painters for inspiration. Jackson Pollock’s thrilling imagery springs to mind. He ‘broke the ice’ by using colour and free imaginative drawing to render his scenes, creating a market and demand for works of abstract expressionism. 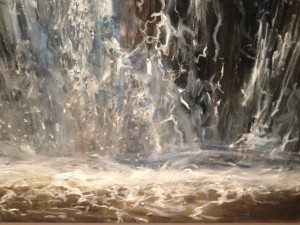 Elizabeth Sullivan will be offering her highly textural oils at the No Vacancy Gallery, Federation Square at Melbourne from March 17th to April 6th 2014, with an opening on March 20. Liz says her emotions have always dominated her works, which to date have been on show at the Niagara Gallery, which exhibits leading contemporary artists, the George Paton Gallery an alternative arts space at the University of Melbourne and the Charles Nodrum Gallery, which embraces a diversity of media and styles, with an interest in abstract and alternative art movements. 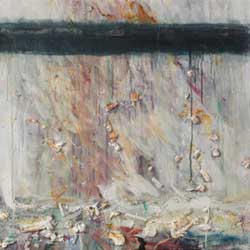 In the world of modern art abstraction artists at first concentrated on a language of form, colour and line. Its roots lay in technology, science and philosophy rather than any sort of visible reality we would recognize on an everyday basis. During the 21st century abstraction in art is breaking new ground in response to our contemporary age’s abstraction of human relationships. However, despite this being an age of technology and communication it seems we are still not good at talking with each other. Abstract art communicates on either a very simple level, similar to marks by primitive man on cave walls and rock formations, as early cultures came to grips with their ideas of the world around them, or on a sophisticated level such as middle and far eastern art forms of calligraphy. You don’t need to be able to read the language to appreciate their beauty of form and style. Perhaps Italian born French poet, story writer and art critic Guillaume Apollinaire (1880-1918) captured its essence best. He defined it as, ‘the art of painting new structures out of elements that have not been borrowed from the visual sphere, but had been created entirely by the artist… it is a pure art’  ATONEMENT – Liz Sullivan FED SQ Melbourne, No Vacancy Gallery – 18th March – 6th April

Before the Flood, a documentary by Academy award winning Americans Leonardo DiCaprio and Fisher Stevens, is a call to action about the reality of climate change