Francois-Auguste-René Rodin (1840 – 1917) created a monumental statue of early nineteenth century French novelist Balzac, which contemporary critics both ridiculed and rejected for its innovative style, while he considered in 1898, that it was ‘the result of a lifetime – at the pivot of my aesthetic’.

Together with artists wanting to make lasting impressions, sculptor extraordinaire Auguste Rodin allowed us with its production to ‘gain an intense consciousness of being’.

He was seeking to capture Honore Balzac’s persona, infatuated as he was at the time, with his subject’s literature. His aim was to capture the power of what lies within. Instead he would create a scandal that would rage for over four decades, until his original work finally found a public space, the corner of Boulevards Raspail and Montparnasse in Paris. Authorised copies made their way around the world. This year is the centenary of the artist’s death and The Metropolitan Museum of Art on Fifth Avenue in New York will celebrate by producing its historical collection of Rodin’s works, produced at a time when art and design was becoming accessible to a wider audience than ever before.

The exhibition Rodin at The Met opens on September 16, 2017. The artists affecting image of the mythological figures of Orpheus and Eurydice is one of fifty marbles, bronzes, plasters and terracotta works to be showcased in the newly refurbished sculpture gallery named for philanthropists Iris and B Gerald Cantor and made possible by the ongoing generousity of their foundation.

Modelled before 1887 and carved in 1893, the wonderful image represents all the stories about eternal love integral to the evolution of art, design and style antiquity to the present age. Many of the works to be displayed haven’t been seen for decades but they still have the power to influence our perceptions and leave us with a lasting impression of Auguste Rodin’s imaginative genius, as well as why so many considered his hand was guided by the creator. He crafted his works to express the ‘violent emotion or extreme stress on the human figure’.

In mythology Orpheus was known to charm wild beasts and even stones with his music. He, and by extension his lyre, are associated with unfailing devotion since he followed his wife Eurydice into the underworld.

There he persuaded Hades to release her on the condition he never look back to see if she was following him to the surface. Unfortunately, he could not resist the temptation and he lost her forever. 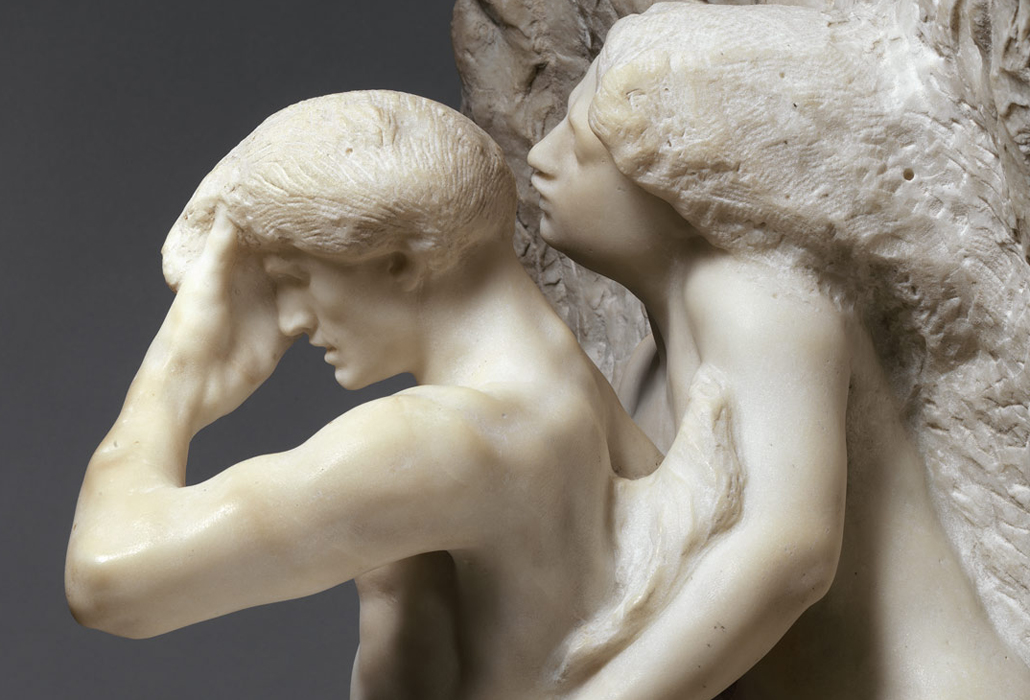 She is shown captured at the moment of transformation in the rough hewn block of marble that represents the underworld. Her hair has now become fused into its essence, while he remains apart, at a pinnacle of perfection in terms of his modelling.

For thousands of years the ancient art of creating images carved from materials brought forth from the earth arose in all the ancient civilisations amazed onlookers throughout the ages. The traditions attached to creating sculpture lasted until the dawn of the twentieth century, when new impressions challenged old ways and the old tried and true methods.

Today Balzac, and indeed all the sculptures Rodin created, including some of his most well known The Thinker, The Kiss, The Hand of God, The Tempest and The Burghers of Calais, all testify to his skill as a sculptor and his vision of sculptural art for the future. Beauty and innovation were important aspects of the era in Europe from around 1890 to 1914 when France and its European neighbours were at peace, until the outbreak of World War I shattered the rhythm and elegance of what was perceived as a ‘golden age’.

Rodin employed traditional methods using sketches to cast his work in bronze, producing contemporary sculptural works that testify to his genius at taking the production of three-dimensional images to a whole new level.

He favoured poses and gestures that not only revealed his characters as unique and individual, but also as innovators breaking through the boundaries of life. Rodin’s study of Balzac is less than half the size of the original, showcasing the dressing gown Balzac preferred to wear when writing and with its production, Rodin is said to have created the first truly modern sculpture.

Paintings by his friends Pierre Puvis de Chavannes (1824-1898) and Claude Monet (1840-1926) will also be presented in dialogue with the sculptural display, including drawings, prints, letters, illustrated books and photographs. His engagement with photographer Edward Steichen (1879-1973) who acted as an intermediary to bring Rodin’s drawings to New York, will be explored.

Monet and Rodin presented a joint exhibition in 1889 which brought them both prosperity, enabling Monet to buy his home at Giverny, which he commemorated by building two greenhouses, hiring six gardeners and getting married again.

It was 1912 during the artist’s lifetime when The Met first began its love affair if you like with Rodin, devoting a whole gallery to an individual artist for the very first time with some thirty sculptures and fourteen drawings on display in Gallery 800. During the 20th century Iris and B Gerald Cantor gifted more than thirty more sculptures, many cast posthumously and coming from editions authorized by the artist in his lifetime. Organized in collaboration with their colleagues by the Curator in The Met’s Department of European Sculpture and Decorative Arts Denise Allen, Assistant Curator in the Department of Drawings and Prints Ashley Dunn, together with Alison Hokanson and Asher Ethan Miller Assistant Curators in the Department of European paintings, the display will close January 15, 2018 although the works installed in Gallery 800 will remain on permanent view with periodic rotations of selected works. Rodin at The Met

Outlander Series 3 Episode 3 sees Jamie in prison in Scotland, while Claire is studying to be a Doctor in Boston – it is a time for all debts to be paid in full