Since we first wrote up the Aussie Ute in 2010 the old Aussie Ute and the Deni Ute Muster, which is in Deniliquin, a city at the heart of the land, has become a phenomenon. It’s becoming bigger than Ben Hur! Since 2017, they have all new rules and 2018 is their 20th anniversary.

In case you live outside Australia and are not sure what a Ute (Utility) is – it is a vehicle with the cabin of a sedan and the back of a small truck. The ‘Ute’ has long been a favourite vehicle for farmers and tradesmen Australia wide and is an integral aspect of the Australian landscape.

Over the years it has gradually become an icon and a quintessential Aussie bloke’s style accessory, along with his blue cattle dog, who generally rides up back with his tongue hanging out.

Just pull up at any car park next to all the high rise buildings being built in our cities, (well at least  here in South Yarra, Victoria) and you will find it packed with Aussie Utes. The new gen tradies are really into it, they are going back to the future. After all it is a Victorian invention, although a new age ute now includes the latest whiz bang technology.

The people of Melbourne claim that it was a local lad who invented and built the first Ute in 1929. James Freeland Leacock put in an application to register a convertible body for motor vehicles.

It was submitted to the Patents Office and accepted in 1930. 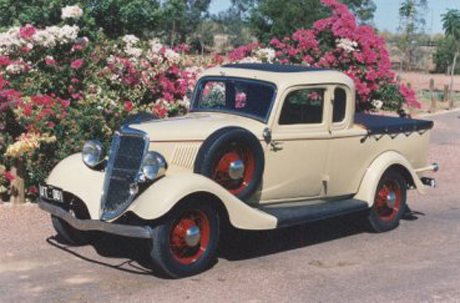 This was made by the swish new Ford Motor Company at Geelong in Victoria, in 1934. It was designed by Lewis Brandt.

The Ford ‘Ute’ combined a two-door “coupé” cabin with an integral cargo bed behind the cabin—using a light-duty passenger vehicle-derived platform.

There is another ‘legend’ the original idea for the ‘Ute’ came from a Geelong farmer’s wife who is supposed to have written to Ford in 1933 advising the need for a new sort of vehicle to take her ‘to church on Sundays and the pigs to market on Mondays. Many people in Australia have a you beaut Ute memory, or story. They were certainly an integral part of my childhood with a brother in law who was a tradie, a plasterer.

He used his Ute every day to cart around his bags of plaster, materials, buckets and mixer.

Then on the weekend out it would all come and my mother would ride up front while my father, sister, their children, my brother and I, plus all the gear would pile into the back tray and head off for a picnic in the National Park along with all the flies, another Aussie essential accessory. Crashing and being hurt wasn’t a consideration so one would say today we were probably all very lucky. People today would find it hard to believe but there wasn’t really that many cars on the road back then, and what roads there were had speed limits very different to now.

In my early teenage years in the 50’s when staying on my Uncle’s property at Tamworth I learned to drive a stick on their old Ute.

My cousin, a few year’s younger was a great proficient, and it was he who taught me to drive. We used to race all over the paddocks feeding the animals and ferrying deliveries to his eldest brother’s property a few miles down the road. Very risky business.

My uncle’s dogs all rode up back and loved it. And, the boys when working all wore their traditional blue singlets with their khaki shorts and big boots every day, so they sure looked the part. On Friday night we would get dressed up and pile in the back tray for my Uncle and Aunt to drive us all into town for a terrific feed. T Bone steak, chips and salad at the local pub – in its back yard, which they called a ‘beer garden’, although today we would give it a much more ‘posh’ name.

It certainly stood me in good stead when I finally learned to drive a car aged 20 from a professional instructor.

He was surprised at how quickly proficient a girl could be and I obtained my driver’s license in 1964 after only a few lessons.

This was a big feat in our family as my mother (born in 1906) and my sisters (born pre war) had never driven. My father (born 1901) only purchased his first car and learned to drive when I was already 16 and he was 59 – I was the youngest of seven children. In the bush in Australia a Ute for the ‘working class man’ still reigns supreme. It is not complete without a trio of working dogs in the back.

Country boys believe all fair dinkum true blue Aussie blokes should own a ute, and in the city today at any building site car park, the utes all proudly stand in rows.

It is a great investment because it also gives them a great opportunity to be a romantic bloke, especially if they fit it out with an old mattress so that they can take their Sheila’s star watching. 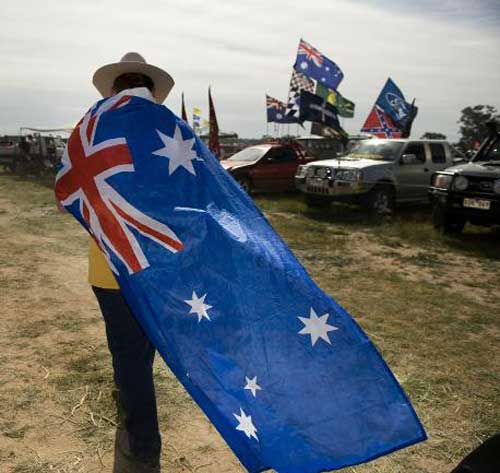 And if you muster all the blokes, throw a barbie and some beer and prawns in the back and head for the beach, you can be sure to have some fun.

In the last decade in Australia the great Aussie Ute has really come into its own. The Deniliquin Ute Muster and Play on the Plains Festival is now a must on any true dinkum Aussie Ute owner’s calendar. Beginning years ago with a group of utes, their owners and their dogs getting together in a paddock it is now credited with saving the economy of a very pretty Riverina town. Many great Australian performers like Guy Sebastian and Keith Urban go along and sing up a storm.

Microsoft in its 2007 version of Microsoft Office System showed how funky they could be by including quintessential Aussie words such as the ute along with g’day, sickie, jackaroo, dag, dinky-di, sanga, wuss and cooee.

The Aussie Ute, fair dinkum its an Aussie’s bloke’s style accessory at the Deniliquin Ute Muster