From ancient Persia to the modern private estates of England and Europe to North America and Australia, gardening has been one of the most consistent signs of a great civilisation and the most visually absorbing expression of any culture.

The Royal Horticultural Society’s famous Chelsea Flower Show held annually at London attracts people from all around the world to mainly view flowers raised in English gardens. However for the last nine years a group of Aussies with green thumbs have gradually become a force to be reckoned with as they provided their very own take on what a good garden should be all about.

They have  laboured away with a great deal of love and have won praise from Prince Harry and HM The Queen and become popular with the public. Finally this week they won the 2013 Chelsea Flower Show’s prestigious gold medal and ‘best in show’. Overnight the boys from ‘down under’ have become international celebrities, and their work should generate great international business. They were all captured very happily throwing their hats in the air.

This year they made history with a garden that is innovative, exciting, trailblazing and sustainable, a wonderful example of Australian horticultural prowess and a timely reminder of how important managing our planet’s most precious resource water is for us all.

Designed by Phillip Johnson Landscapes for the Fleming’s Nurseries team, the accolades are already pouring in.

Australian horticulture and landscape design is at the cutting edge of world design and this winning $2 million dollar ‘Trailfinder’s Australian Garden is a great achievement for all involved.

This sensational garden display is a sustainable habitat complete with a monolithic stone gorge, running waterfalls, a sensational contemporary flower like studio structure designed by Melbourne-based architectural firm Studio 505, and a billabong. It has an integrated water management system; retaining and recycling storm water run off.

It took 17 days and over 2,500 man-hours to complete, transforming a bare soccer pitch into a garden retreat par excellence. Wes Fleming from Fleming’s nurseries who led the team was completely overwhelmed that they had finally won the ‘Olympics’ of the horticultural world. Fleming said “We couldn’t have done it without the dedication and support of our 18 volunteer crewmen and our families, not just in 2013 but on every show garden we’ve ever presented since we first arrived at Chelsea back in 2004. So we will share this medal with everyone who has enjoyed the Chelsea experience with us along the way,” he said.

Each year the RHS Chelsea Flower Show is open to the public in May in the grounds of the Chelsea Hospital at London. 2013 is its Centenary Year in the hospital grounds so this success was a very proud one.

It is one of the most celebrated annual events in the world and a wonderful showcase for examples of excellence in horticultural ingenuity.

Over that century it has seen mind-boggling change in the fashion and style of gardens presented, and today it reflects the ever-changing face of garden design.

This change is reflected in the Centenary Garden at the show, which has been designed by Chelsea stalwart British designer Roger Platts, a previous winner of four gold medals at Chelsea. He has his garden design and nurseries in that veritable garden of England, the country of Kent.

“The theme of the garden reflects the history of British gardens over the past 100 years but also focuses on the consistent elements,” says Platts. “So by its nature, it will have a lot going on. My challenge, and it has been a big challenge, is to bring these elements together.” It certainly looks real and established, and honours English garden design of the past while managing to look wonderfully contemporary.

Starting with 244 exhibitors The Chelsea Flower Show has grown to welcome over 500 entries today with nurseries, florists, and educational and other trade stands supporting the growth of gardens to see.

It was the plant hunters and their expeditions to the Middle East and the Antipodes during the 18th and 19th centuries that brought about further expansion and experimentation of the English tradition in gardens.

Recording their finds became of major importance and the art of botanical illustration also reached a high point of achievement at that time.

Interestingly the establishment of The Royal Horticultural Society who runs the Chelsea show was a direct result of a suggestion by the famous Yorkshire potter Josiah Wedgwood.

He was the instigator and 1st chairman of its original seven-member committee who met at Hatchard’s bookshop in Piccadilly and included Sir Joseph Banks. He was an important and influential figure in Georgian England. This portrait of Joseph Banks shows him surrounded by the ethnographic artefacts collected on the Endeavour voyage. By Benjamin West. Courtesy: Lincolnshire County Council, Usher Gallery, Lincoln, UK and The Bridgemann Art Library

Although considered an enthusiastic by some grumbling fellows, he was elected President of the Royal Society, and made a Baronet.

He had the ear of both the King and the government and it was his report on its fine flora following his visit to the antipodes that led to Australia’s colonization, because no one doubted his word.

The colony became irrevocably linked with the natural philosophers in Britain because the well-established Royal Botanic Garden at Kew was at that time under Banks’s supervision. It was the main repository of the living plant wealth of the British Empire.

Through a steady stream of correspondence with government officials, explorers and collectors, Joseph Banks exerted his considerable influence on the colony’s early development as he collected and cultivated exotic plants from around the world.

The year Australia was settled, 1788, James Edward Smith had founded the Linnaean Society, purchasing the collections of the influential Swedish naturalist Carl Linnaeus and shipping them to London. They were housed in hired rooms overlooking the famous Chelsea Physic garden.

Smith also formed strong links with the colony, the Royal Society and the Royal Gardens at Kew because they all had one thing in Common, Joseph Banks.

Society members were encouraged to scour the globe by now for flora and fauna, fossils and minerals and Australia offered a new and exciting place to acquire them. 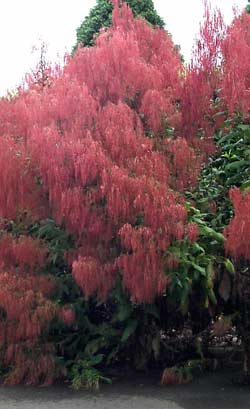 Joseph Banks gave Lady Hume seeds of the elegant flower Humea elegans. She succeeded in cultivating the rose coloured Humea, in her garden and Smith praised her efforts.

The species became a very popular collector’s item in the 1800s and a bit of a status symbol. Ballrooms throughout the counties displayed this elegant potted plant and aphrodisiac qualities were attributed to the aroma from the leaves. It is now known botanically as Calomeria amaranthoides and much admired for its waving mop-top heads.

Smith wanted to dispel doubts that plants from New Holland were ‘deficient in their beauty’ and cited the brightly coloured styphelia tubiflora to prove otherwise.

He wanted it to be ‘a perpetual assertor of the botanical honour of its country’.

The Pultenaea stipularis scaly Pultenaea, figured in A Specimen of the Flora of New Holland, sent to Smith by gardener Alexander Murray, raised from seeds brought back from NSW in 1792, flowering two years later.

As with many Australian plants, Smith found their classification difficult, putting this plant into a new genus named after the English botanist, Dr. Richard Pulteney.

In the 1980’s a stunning colour edition of Joseph Bank’s famous Florilegium plates were produced for the first time. If he were alive today he would surely be ecstatic at the painstaking work undertaken to produce them.

This fabulous Australian gardening trailblazing team’s epic journey to achieve this year’s ambitious Trailfinder’s Australian Garden, the biggest Australian exhibit Chelsea has ever seen was also captured by cameras as part of documentary series for Foxtel.

The two-part special, hosted by Selling Houses Australia landscape designer, Charlie Albone, will air on The LifeStyle Channel later in the year. Garden designer Gavin McWilliam (right) and guest at the Trailfinders Australian Garden presented by Fleming's at the Chelsea Flower Show at Royal Hospital Chelsea on May 20, 2013 in London, England. Photo by Tim P. Whitby

Well done chaps, would seems the most appropriate thing to say!