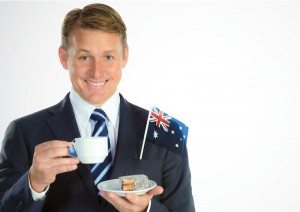 Snags on the Barbie and a Lamington chaser are tried and true ingredients for the Queensland Theatre Company’s production of ‘Australia Day’, which will open its season on 25th January and run until the 16th February 2014.

All they need to do is add avo’s (avocados) and mangoes into the mix to be really true to Queenslanders and to put a sizzle into everyone’s day. 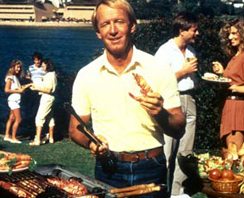 Politically incorrect, the Queensland Theatre Company’s production of Australia Day will be sure to delight.The action takes place in the Aussie country town of Coriole, where we find a mob of bumbling bureaucratic battlers as they debate the details of the national day. Life is typically ‘laid back and carefree’. The tale is based on the idea that the ultimate cultural celebration of what it means to be Australian has now, for more than half a century, been associated with the phrase putting a ‘shrimp on the barbie, which Australian comedian Paul Hogan quoted in a series of ads that appeared internationally from 1984 to 1990 and it became infused into Aussie culture. 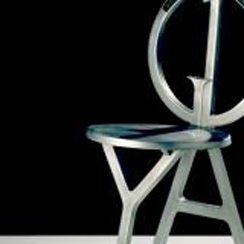 He was urging people overseas to come and say ‘G’day’,  just as the Qld Theatre company are doing. At the time it even spawned the design of a ‘Gday Chair’ 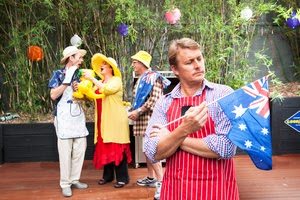 They want you to witness the fun as Coriole’s mayor, who is trying to become a true blue candidate for the Liberal party, sledges the local Greens and tries to win pre-selection. With biting wit and wisdom playwright Jonathan Biggins and Director Andrea Moor guide this rollicking satire, which stars a wonderful line of up of talent led by Paul Bishop. He is, in his day job a councillor on Brisbane’s bayside city Redlands council.

AUSTRALIA DAY by Jonathan Biggins starts 25 January until 16 February – Playhouse QPAC. All those wishing to be voyeurs of this terrific tabloid are being urged to not to forget to spray on their ‘Aeroguard’, to grab a stubbie holder, a cold one and BOOK NOW

Moment seized me, I seized the moment is an extensive collection of beautiful complex artworks reflecting the last 2 years of artistic achievement for Seong Cho