Australia is the name of the most ‘significant survey of Australian Art ever mounted in the United Kingdom. Works from all the most important public collections in Australia have been brought together under the aegis of the National Gallery, Canberra who are in partnership with the Royal Academy at London for this significant joint initiative.

Images of their new country were one early settlers in Australia wanted to record, long before they tackled ideas of literature, music, theatre and dance.

An aim of the exhibition is to reveal to English audiences how our artists explored national identity, defining themselves, away from the rules of the European tradition. In 1961, Sidney Nolan told writer Colin MacInnes that the main ingredients of the ‘Kelly’ series were ‘Kelly’s own words, Rousseau, and sunlight’.

This sums up his engagement with Australian history, Australian landscape and European enlightenment at the time of Australia becoming a colony of England.

Writing during the 1760’s Jean Jacques Rousseau (1712-1778) French political philosopher, educationist and author drew an equation between the informality of British dress, embracing the virtues and simplicity of country life and the relative liberty of the British constitution.

Rousseau hoped that by a formulation of  a ‘State of Nature’ philosophy to change the traditional attitude of the French aristocrat. He believed man could only discover true happiness by being in close contact with the earth, adopting a simplicity of manners and modesty in dress….this equation is something Nolan admired.

Highlighting such works in London today helps to makes the point that in Australia our art, is an integral aspect of the development of our world just as it is for those living in Europe and England.

We have our own stories to tell.

Nolan’s works were ‘wilfully naïve’, and made him a hero of the mid 20th century’s avant-garde.

In 1948 he recorded that the Kelly saga was ‘a story arising out of the bush and ending in the bush’.

An understanding of the English landscape art genre was a motivation. He said “I find the desire to paint the landscape involves a wish to hear more of the stories that take place in the landscape … which persist in the memory, to find expression in such household sayings as “game as Ned Kelly”.

This means the landscape is crucial to his Kelly paintings; the story gives meaning to the place. Works of art on show span over 200 years of our social and cultural development. They include many of the most well known of our artists, including such renowned Aboriginal artists such as Albert Namatjira (1902-59), Rover Thomas (c.1926-98), Emily Kame Kngwarreye (1910-96) and a number of significant artists from the Papunya Tula group of the Western Desert. Ramingining Artists The Aboriginal Memorial 1987–88 National Gallery of Australia, Canberra Purchased with the assistance of funds from National Gallery admission charges and commissioned in 1987

Australia’s style is very hard to define, especially during the past 30 years with our increase in multiculturalism, it is like a chameleon, always changing colour.

For international visitors, especially our English counterparts, Australia is a place where birds laugh, mammals lay eggs and while everything is somehow familiar it is also somehow altered.

The show will include many works that have never been seen internationally before. The President of the Royal Academy of Arts Christopher Le Brun said: “The Royal Academy is delighted to be working in partnership with the National Gallery of Australia…and HRH The Prince of Wales’ patronage of the exhibition acknowledges the ambitious scale of the project and the close links that the UK and Australia continue to share today.” HRH The Prince of Wales said recently “I can hardly believe that it is now almost fifty years since I first visited Australia. It was during that first stay that, like many before me, I was deeply struck by the distinctive colours and light of Mackellar’s ‘sunburnt country’… It is an extraordinary achievement that the Royal Academy of Arts and the National Gallery of Australia have been able to bring together so many important works for the first time outside Australia.”

In Australia our art and architecture is a product not only of practical consideration, but also of aesthetic impulses. Each state and each region in Australia has developed its own style from a standpoint that was at first anyway, essentially English. It was, in some instances, adapted to suit the harsher Australian climate.

We have strong links from our early beginnings as a colonial settlement and connection to the landscape traditions of English artists. John Glover’s wonderful view of the artist’s own house and garden at Mills Plains, recorded around 1834, shows how portraits were commissioned by the owner of a property to adorn his chimneybreast. They show off the mountain, plain, water and sky with house and outbuildings depicted with accurate detail. Such a riot of colour went hand in hand with garden development and a passionate pursuit of botanical triumphs. "Droving into the light", by Hans Heysen, Art Gallery of Western Australia.

The development of painting the Australian landscape was a major focus of our artists for the first 150 years. As in England for a long time in Australia, the grand country estate represented the pinnacle of material and social achievement.

The theme of the exhibition reflects the importance of land and country to Aboriginal and Torres Strait Islander people, and its influence on their art practices.

Aboriginal and Torres Strait Islander art makes up a quarter of the selection, with works ranging from one of the earliest surviving bark paintings to contemporary urban Aboriginal art.

By examining episodes in history that privilege an Aboriginal perspective, Julie Dowling’s portraits reveal what Australians as a nation choose to remember and what we force ourselves to forget.

This poignant work alludes to early and violent contact between Aboriginal people and Europeans.

Dowling’s interest lies in our contemporary interactions, both actual and symbolic. Transcending its historical roots, the work is reflective of how far we’ve come and how far we have to go. 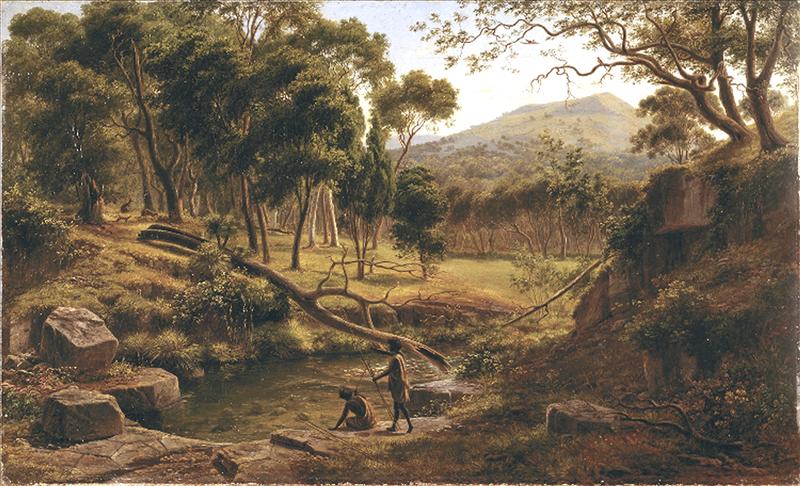 Works by nineteenth century European immigrants such Eugene von Guérard (1811-1901) feature along with the Australian Impressionists whose paintings relied heavily on the mythology of the Australian bush. Internationally recognised artists such as controversial artist Bill Henson (b.1955), Gordon Bennett (b.1955), Tracey Moffatt (b.1960), Fiona Hall (b.1953) Shaun Gladwell (b.1972), Christian Thompson (b.1978) and Simryn Gill (b.1959) who represented Australia at the Venice Biennale this year will be sure to create interest.

Should be a great show, although viewers in England may not easily comprehend or be able to come to terms with the art works of their former colony, which while it somehow seems familiar, is in reality dramatically different from their own.

Australians now have their own cultural viewpoint and what this show is meant to do is document that journey. Post Script: Some critics have panned the show without mercy, while others have shown considerable interest.

Sponsored by Qantas and The Campaign for Wool, the aim of the show was to mark the first major survey of Australian art in the UK for 50 years. This exhibition spans more than 200 years from 1800 to the present day and seeks to uncover the fascinating social and cultural evolution of a nation through its art.