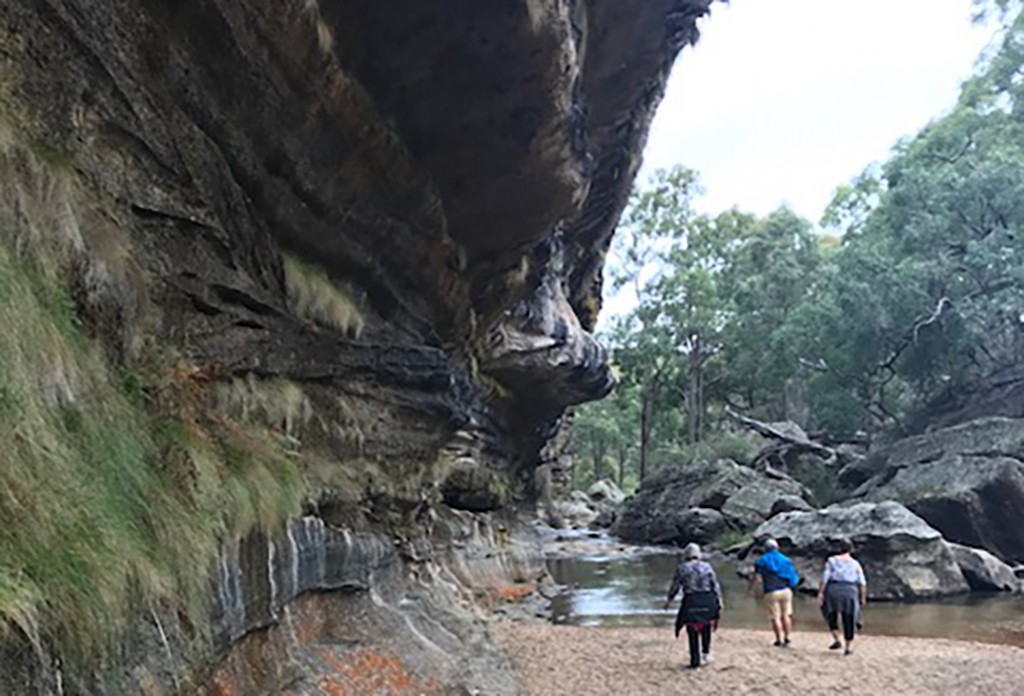 The Mudgee region is Wiradjuri country with the rustic charm of historical and picturesque villages, rich cultural heritage, diverse artistic exhibitions, delicious food and delectable wines. I have been here before, however, on this trip to the Mudgee area I discovered the immense joy of one of New South Wales most beautiful bushwalks, The Drip. 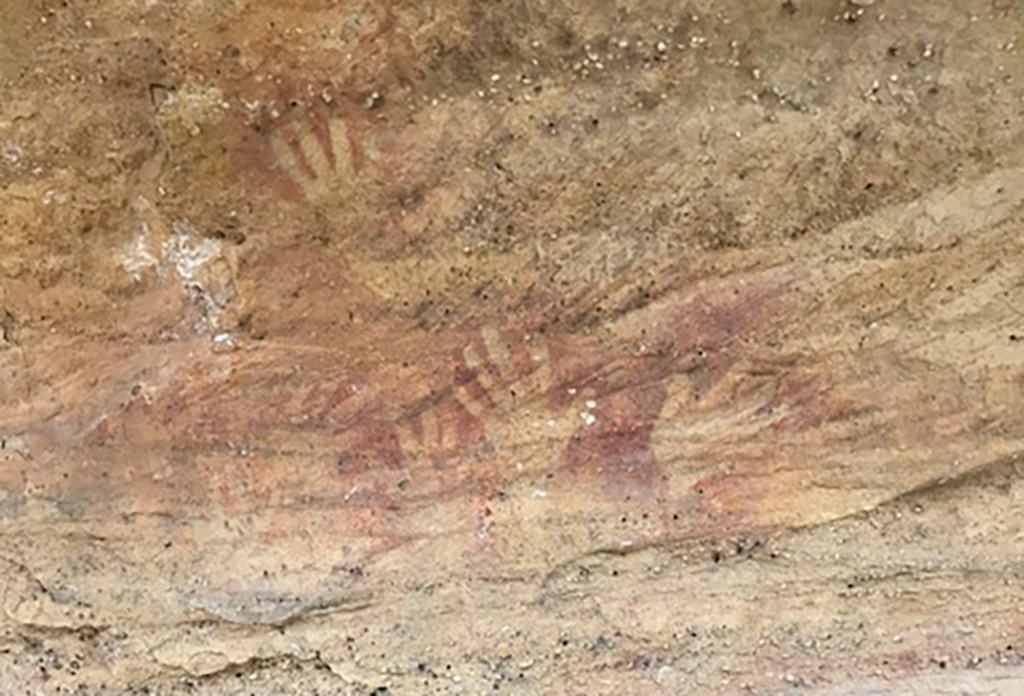 This was followed by the awe inspiring age old wonder of the stencils of hands made by the Wiradjuri people at what is known as Hands on Rock.

The Drip is a towering natural sandstone cliff-face formation situated fifty kilometres north of Mudgee on the Cassilis Road and ten kilometres past the village of Ulan in the Central Tablelands of NSW. 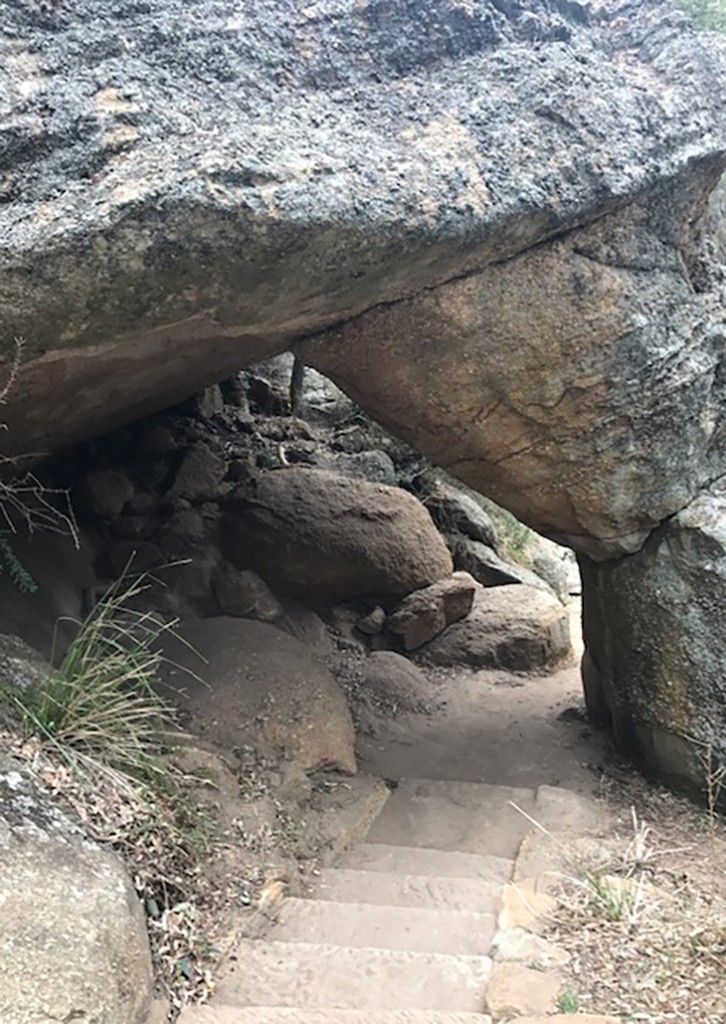 The Drip walking track is approximately one and a half kilometres and begins in the parking area near the barbeques. It is a twenty minute walk each way. However there is so much to observe and savour extra time should be allowed.

The track is child friendly and offers a wonderful family experience not only to share in but to develop concepts of conservation, the pleasure of walking and the comfort and nourishment offered by the distinctive character of the Australian bush.

I followed the rock face and crossed over a tumble of rocks that led down to a watercourse (Curra Creek). 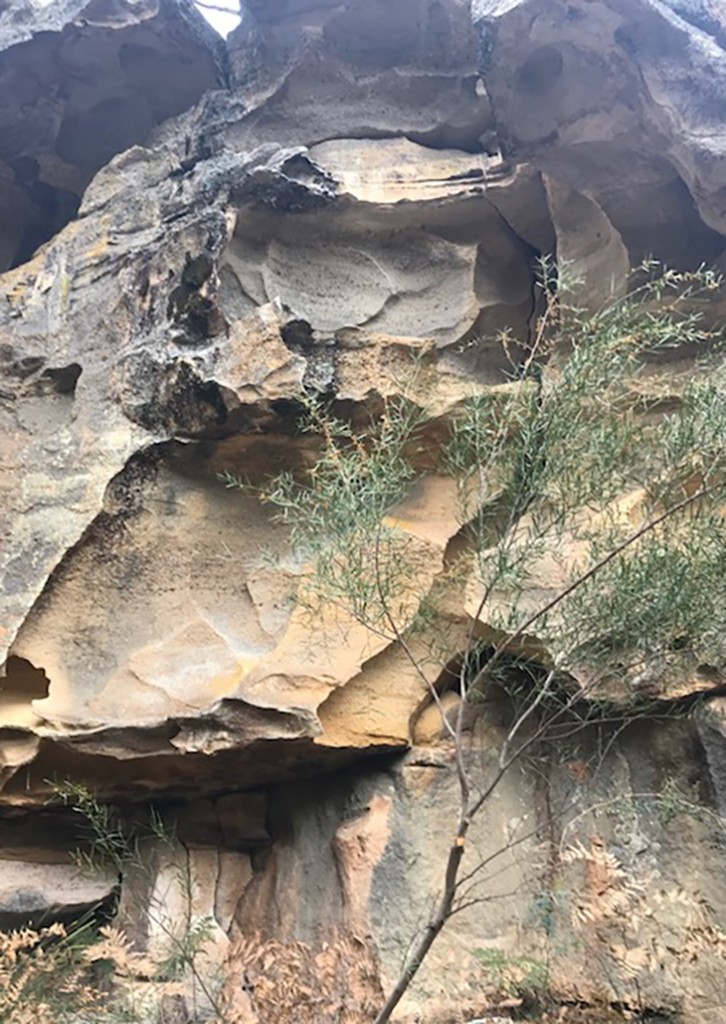 As I moved away from the noise of cars and the structures of a picnic area I was immersed in the harmony and relaxation walking in nature delivers.

The track abounds in natural hanging gardens, weeping grasses and ferns embellish the path. I was cocooned in the calm cool environment of the peaceful surrounds. The rock formations carved by wind and water contain diverse shapes including to my eye the illusive abominable snowmen. Next a skull like formation appeared to be hovering and guarding the Creek. The erosion of grain by grain coupled with the evidence of ancient sea beds was tantalising to observe first hand. 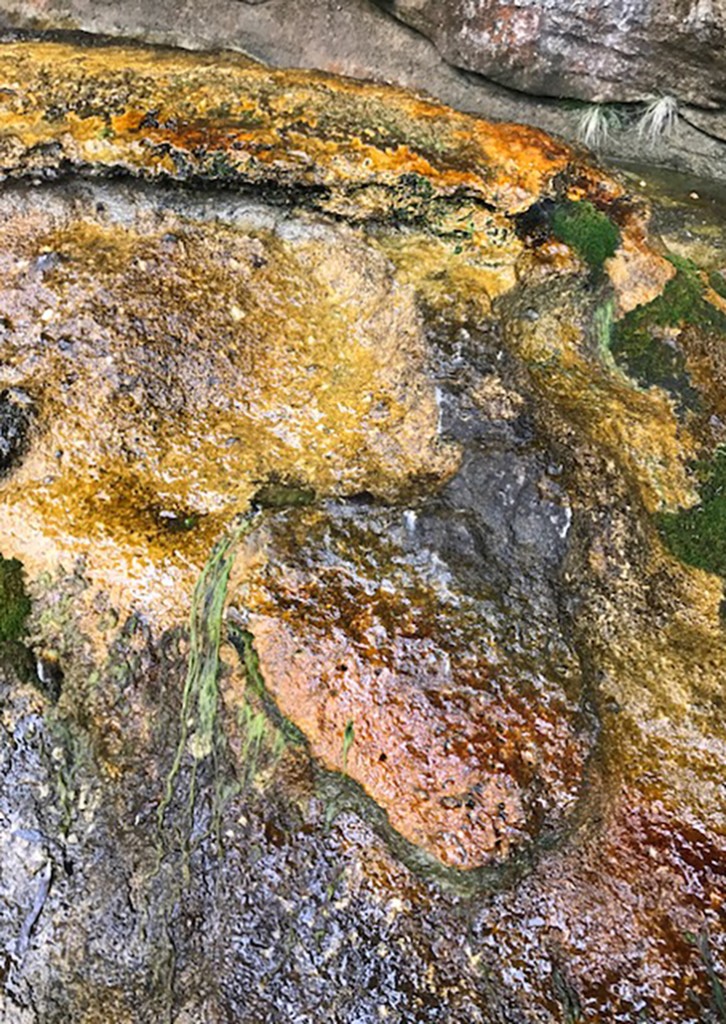 The rock in the sandstone is made up of sand grains, with quartz pebbles in some of the layers.

Several of the rock ledges occurred as honey comb with holes curved and hollow. This layered and weathered pattern has been stained through the ages by minerals, algae and lichens.

The shiny lustre of the rust colours glinted and glowed under the touch of sunlight. Fallen bark adorned an immense rock, like a lizard scampering triumphantly to safety. The substantial character of the rock was a timeless reminder of the ebb and flow of ancient structural formations and seasoned changes. 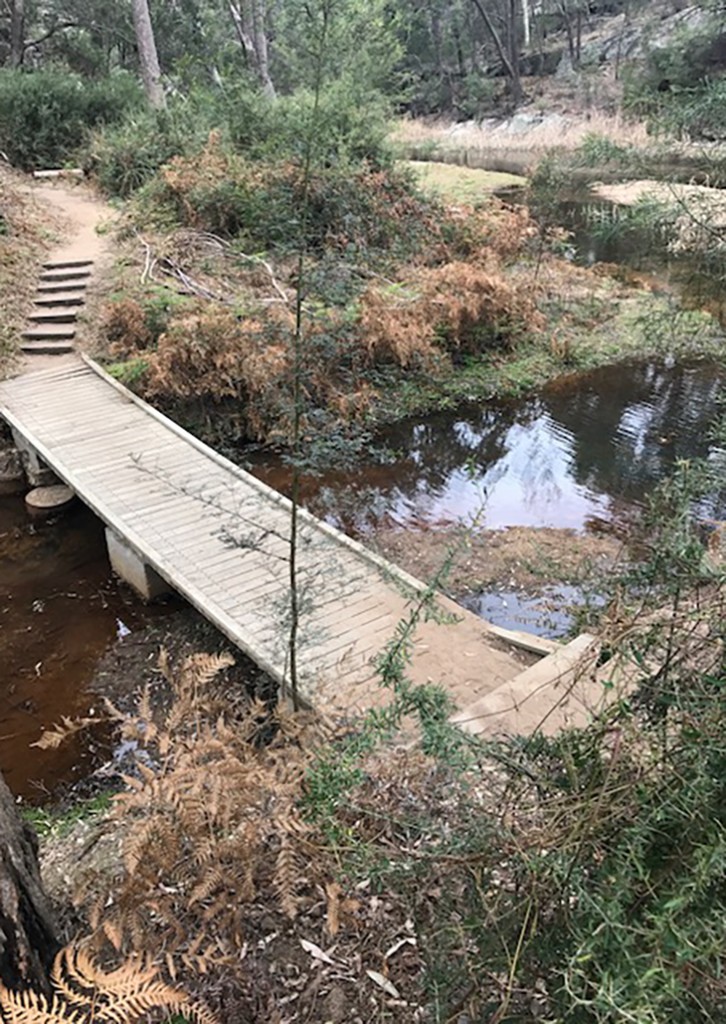 A timber bridge spanned the creek and the ferns cast their serrated elongated shadows on the still water.

The path continued up a few steps then gently flowed parallel to the creek. 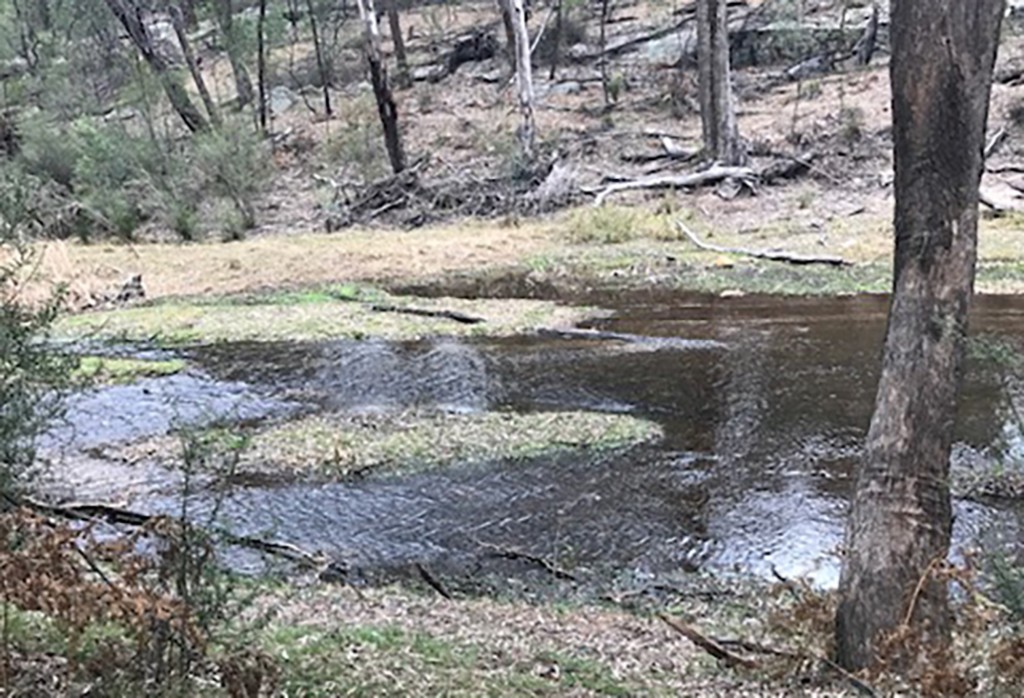 Suddenly the scene before me spoke of the hues and forms of the uniqueness of the Australian landscape. The grey charcoal slender trunks, the tired green of spindly shrubs and the faded corn coloured earth offered a sanctuary of still silence.

There are diverse habitats including shallow water, river flats, bolder piles and cliff faces that support at least eighty species of native plant life. Some vegetation is seasonal or only appears after rain. 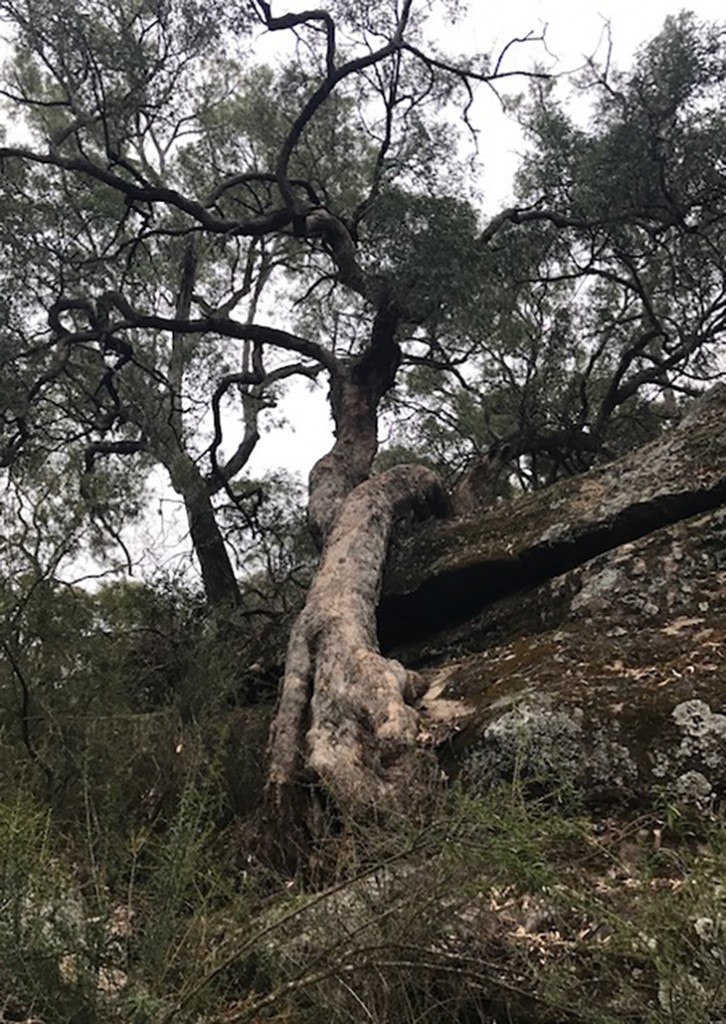 My visit coincided with very dry climatic conditions and regrettably I missed many of the flowering species like the Donkey Orchid and the Tongue Orchid.

The river corridor is fertile and supports a variety of animal life much of which is unseen. It was exciting discovering wombat burrows along the track and listening to the warbles and sounds of the sweet bird songs. It was strange and wondrous to observe the gnarled and twisted branches of trees growing straight out of the sides of the rock surface. A tall chimney shaped tree emerged from the top of the cliff majestic and miraculous.

Steps lead under a massive brick archway creating a solemn and auspicious ambience. This gouged arch rock resonated with age and solidity.

Then a sharp turn brought me to the beginning of the Drip where the river flows over a rock platform at the base of an overhanging cliff face, dripping clear spring water. 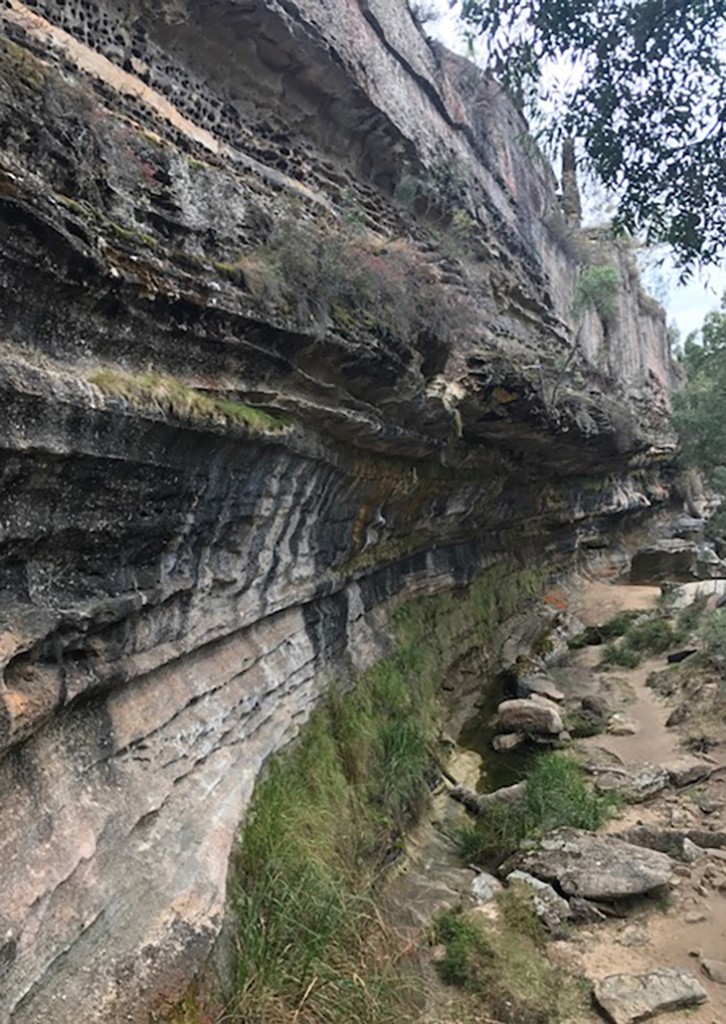 Although there was a disappointing amount of water dripping, the natural marvel was spectacular. The Drip cliff is almost a straight line running east-west. The overhang and gorge have been dramatically shaped by natural forces.

The patterning, indentations, colours and textures of this strikingly natural spectacle are breath taking. Walking under this gigantic structure and viewing the power and beauty of natural phenomena was exhilarating. I left my footprints on the Drip walking track behind me and continued on my journey of exploration to view the handprints made by the Wiradjuri people at Hands on Rocks. 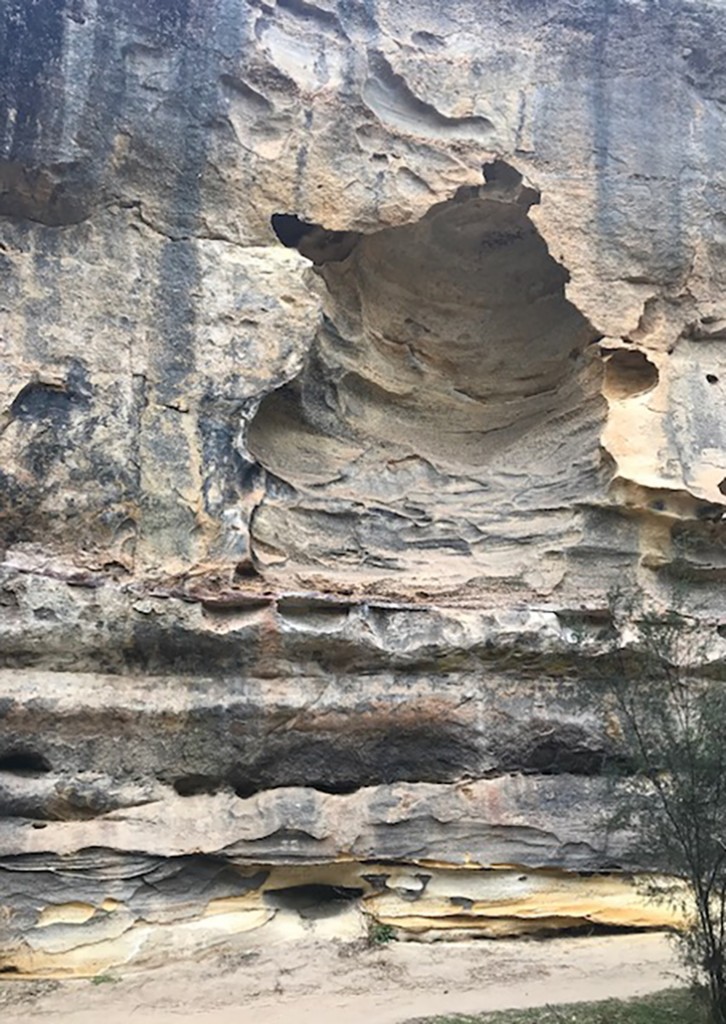 This heritage site is located two kilometres on the left hand side past the entrance to The Drip. Turn left at the Bobadeen Road sign, then sharp left again and drive five hundred metres to the car park. This is not a sealed road and extra care needs to be taken to avoid potholes.

The Wiradjuri people occupied most of the central west of what is now New South Wales, and were one of the largest of Aboriginal language groups.

The one kilometre track was deserted and I was immersed in unspoilt open bushland through the first five hundred metres of easy walking.

The vegetation is typical of what once covered this area of the ranges.

Then the trail slopes up steadily to the rock cliffs. I needed to be cautious as some loose stones are scattered on the path’s surface. The spell of the bush pervades and gently embraces the walker removing for a short time the apprehensions of contemporary life.

On arrival at the Hands on Rock it was immediately clear that it was a very culturally significant and idiosyncratic Aboriginal site for the Wiradjuri people. This was a crucial meeting point for trading goods, tribal ceremonies and corroborees that happened at different times of the year. 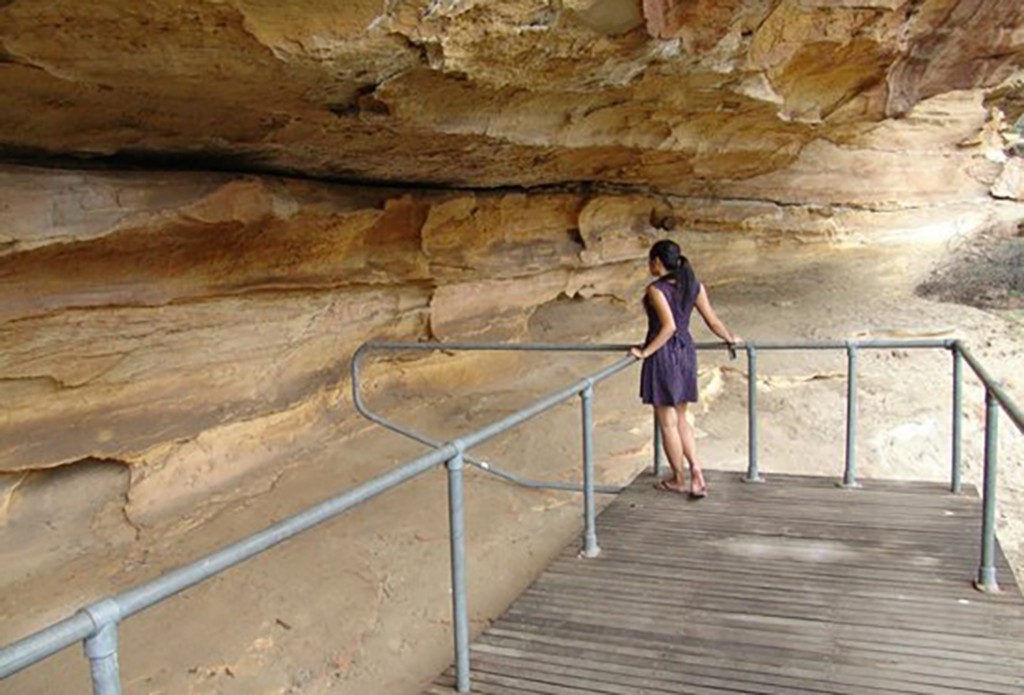 This sacred site consists of over one hundred hand stencils of women and children, emu feet and other motifs. It is a very fine example of the stencil style of rock painting. The magnificent sandstone rock cliff is the canvas for the images that are created by blowing wet paint from the mouth over and around a held object.

A viewing platform has been constructed and visitors must remain strictly on it and not leave the walking path. Respect and care for such a beautiful art form and expression of the oldest continuous culture on earth is paramount to preservation and reverence.

Stepping back in time, the bush setting and bearing witness to past Aboriginal art history was a very humbling experience.