…as ‘always, it is the historical that informs our contemporary world’* The Australian Antique & Art Dealers Association (AA&ADA) annual Fair will be held in the impressively restored spaces of the Royal Exhibition Building at Melbourne between 24th and 28th April 2013. AA&ADA Fairs offer for sale the finest and most diverse range of fine art and antiques in one place, at one time, in Melbourne. The shows are Australia’s only international quality fairs. They are fully vetted for authenticity and backed by the reputation of Australia’s finest antique and art dealers

Tony Ellwood, Director of the National Gallery of Victoria (NGV) will be a keynote speaker during the event. The NGV sits at the heart of the collecting art and antiques world in Australia, its historical decorative arts integral to its foundation. Since Tony Ellwood arrived from Queensland to take charge of the gallery and its collections during the second half of 2012, those decorative arts relegated to the basement are being brought back on show. 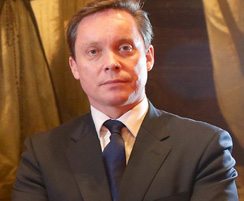 They are as he says ‘ a reference point to which we refer, often unconsciously, and which provide the foundation for culture in our lives’. Art and antiques he also says, will always have a central role to play in our community. This is something Ellwood truly believes, and is deeply informed and passionate about.

Paul Sumner, Marketing Director for the 2013 Melbourne fair notes that “The market for antiques and traditional arts is changing internationally and it is true to say that as the world globalises the taste of collectors is also becoming more diverse and eclectic”. 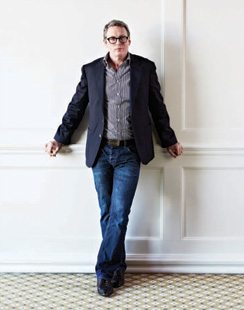 Paul has been busy gathering an impressive group of sponsors for this year’s fair, including the fabled Tiffany’s and well known and respected Melbourne based designer Stuart Rattle who has been invited to provide a stand with his take on living with antiques on a daily basis in contemporary Australia.

These days most antique dealers would agree that an ‘antique’ is all about the very best example of a combination of wonderful design aesthetics, quality materials and excellence in manufacture. It adds far more to the value if it is in fine condition, has glorious patina and an equally fine provenance.

Held over the Anzac Day weekend, the dealers will also host the RSL this year as they present a stand that celebrates the role Australian soldiers and service men have played in securing the freedoms we all enjoy today. Anzac biscuits will be served in a café under the great Dome of the historic venue, sure to add to the nostalgia surrounding such an event. RSL Members will be free on Anzac Day itself after 1pm as the fair opens late as a mark of respect.

“It’s going to be a great show” said dealer Jamie Allpress, of Allpress Antiques at Malvern in Melbourne when my son’s partner and I were visiting his store recently. “The list of dealers showing wonderful things is very impressive” Jamie said. 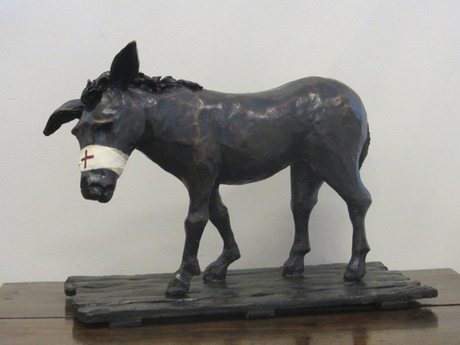 Simpson's Donkey carried many wounded people to safety during World War I, contemporary bronze sculpture courtesy of artist Martin Tighe on show at Allpress Antiques stand at the AA&ADA Melbourne Fair 2013 over the Anzac Day weekend

For those with a love of beauty and an admiration for proportion, shape, style and form, buying antiques offers many advantages over purchasing modern furniture pieces. This is because they have achieved that certain je ne sais quoi, an intangible quality that makes them singularly attractive.

It also helps to know that in times of need antiques and art can be recycled.

Jamie Allpress believes great art and great antiques from any age can work together well and has often proved his point with great photo shoots showing how well they work together. He will be displaying his own wonderful items, alongside contemporary art works including those by Melbourne based artist Martin Tighe, whose bronze sculpture of Simpson’s famous Donkey, who helped his master rescue so many wounded soldiers during World War I, will be on display.

It quite took my fancy at the showroom while we were talking because for me sculpture is art at the pinnacle of what is possible. A George III English oak dresser base displayed with a work by Bill Henson, courtesy of the artist and Jamie Allpress Antiques, Malvern Victoria

Wonderful pieces, whose design and style provides us with a visual record of private life and of man’s significant achievements in creativity and quality craftsmanship, will suit any setting when viewed as items that stand alone.

Collecting is, and has become an amazing phenomenon and a pleasure indulged in by a vast number of people from different backgrounds and all walks of life and takes place on many different scales of economy.

The good thing for collectors is that today there is an ever expanding number of categories to collect in.

I have deduced the most important aspect of collecting is, for the majority of people, an emotional connection. This is almost impossible for anyone to define, let alone explain or understand.

We are all fascinated, it seems, by the stories attached to the incredible world of antiques and art, which reflect the growth of humankind both socially and culturally. England is where the whole concept of collecting antiques was invented during the eighteenth century, as learned gentlemen looked back wistfully to the Middle Ages.

Many collectors and dilettante such as Horace Walpole (1717-1797) and his contemporaries Richard Bateman and William Beckford first began to acquire old furniture mainly because of its emotive romantic historical associations.

Furniture and objects of great design made from quality materials from the past and keeping them, like us moving forward, makes good sense and good business in a world that needs to recycle its goods to aid its own continuing sustainability.

The antiques trade in Australia, as watched over by the dealers of the AA&ADA, is all about running an ‘elite’ establishment, while safeguarding a heritage industry that should never be elitist. Brans Antiques & Art
Clive Brans, John Brans
Fine quality furniture sculpture and works of art from the ancient to the 20th century, specialising in the 17th and 18th centuries. English, European and Oriental.

Tickets available at the door

Entry is from either Nicholson Street or Rathdowne Street.

Wheelchair access is available on all levels of the car park.

Opening June 11 in Brisbane an exhibition of the finalists in the Lethbridge 10000, Queensland’s small scale art award in support of emerging Australian artists