The collection of a public museum is its most enduring feature* According to ancient traditions May is a special month and, in the northern hemisphere, a fertile month being Spring. In Australia it is much more reflective, being autumn, when we all have an opportunity to pause and smell the roses. No other month begins or ends on the same day of the week as May in any year. It is named for the maiores, or elders and followed by June, named for iuniores, or young people, at least according to the Roman poet Ovid. It always seems to me to be a merry month filled with many social and cultural activities, as well as celebrations of life, all around the world.

It’s certainly a wonderful month to be putting on show for the first time FREE a new display of Australian Art at the Art Gallery of NSW. It will feature something for everyone. On the weekend of May 12th and 13th one of the country’s ‘finest collections of Australian art, from colonial times to the contemporary age’ will go on show. And yes it will, for the first time, include Aboriginal and Torres Strait Islander art, giving it a significant presence. Magnificent Pukumani graveposts, acquired in 1959 from the Tiwi artists of Melville Island, will be exhibited alongside seminal bark paintings by Mithinari Gurruwiwi, Wandjuk Marika and Muggurrawu Yunupingu. Work by artists influenced by indigenous traditions, such as Tony Tuckson, will also be integral to the presentation.

All this is happening because the ‘Australian Galleries’ have been re-designed by a team, including architect Richard Johnson. The spaces have been expanded and a new lighting system installed. On show will be some of the galleries most famous and popular works of art, although placed in a new context. A modern art lounge provided will be a recreation of the 1972 smokers’ lounge, with beautiful views of the harbour, complete with original Corbusier chairs (minus ashtrays!) so that you can access a new app for iPad, which features details about over 40 key collection works. 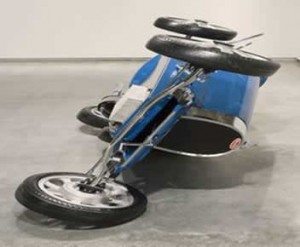 Bugatti Type 35, Sculpted in 2006 by James Angus - Collection of the Art Gallery of NSW

Linking works across time will be a special feature. A contemporary take on a 1920’s Bugatti Type 35, first sculpted in 2006 by James Angus (1970-) will be on show paired with a work by a pioneer of Modernist painting, Grace Cossington Smith (1892-1984) . Her depiction of the curve of the Sydney Harbour Bridge as viewed from Milson’s Point was completed between 1928 and 1929.

Cossington Smith is one of Australia’s most iconic artists of the twentieth century. She is perhaps known best for her paintings of the bridge, although my favourite, also in the NSW Art Gallery, is The Lacquer Room.

Angus’s work, which is also pioneering in our contemporary age, explores the traditional properties of sculpture – scale, volume and form, as expressed in everyday objects, transforming and challenging all our visual perceptions. Works to be brought out of storage for the first time in years, include wait for it, videos + very interestingly, prints. This certainly heralds a whole new age for this wonderful place where people from all different backgrounds meet socially, culturally and spiritually. Art Gallery of NSW a place where people meet, socially, culturally and spiritually

The galleries iconic and classic collection of artworks will not be ignored. Works by well known names such as Tom Roberts, Arthur Streeton, Bertram Mackennal, Frederic McCubbin and Emanuel Phillips Fox will be on display for the first time in years. And, the two Archibald-winning portraits of the late Margaret Olley by William Dobell in 1948 and Ben Quilty in 2011 will be on public display nearby, side by side for the first time.

The opening of this new display will be a cause for much celebration all over the weekend of the 12th and 13th May. Access will be FREE, so queues are sure to be long. The new administration are to their credit continuing the wonderful legacy established by former director Edmond Capon, who believed we should all be able to view important art collections without cost, when and where feasibly possible.

Recently I was reading an article by Artist and Art Critic Jeff Makin about how Australians are still confused and perplexed about what a print actually is. This suggests perhaps the ‘art’ print industry is still in its infancy here, whereas it has been thriving in the rest of the world for over a century.

How do we understand, appreciate or learn about any form of art unless we view it often, which leads to gaining an appreciation for it. For some people the ultimate goal is to become a connoisseur, able to distinguish between what is real and what is a copy. They do this by learning to distinguish an artist’s particular ‘brush’ strokes, because art is a visual language that you can learn to read. On this special weekend there will be many experts on hand to assist your adventure in art. 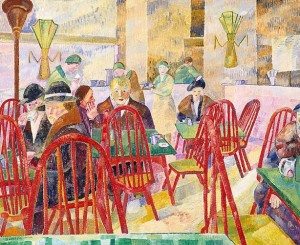 The Lacquer Room, by Grace Cossington Smith - Painted between 1935 - 1936 - Collection of the Art Gallery of NSW

What: Open Weekend
When: 12 May – 13 May 2012
Where: Art Gallery of New South Wales
Art Gallery Road, The Domain, Sydney