The Australian Ballet soon to enter its 54th year has announced Storytime Ballet, a new program designed for children 3-12 years of age. Daily throughout the country children contribute a great deal to the economy by attending Ballet classes both in the town and countryside. “Over 420,000 children participate in dance activities every week” said Executive Director Libby Christie and photographer Anna Kucera caught a bevvy of ballet hopefuls on the Sydney Opera House Steps when they announced the initiative. Mindful of budgets and keeping the price affordable, it will be an hour long version of some of the greatest story ballets for parents to take their children to see live with music recorded by Orchestra Victoria ensuring greater flexibility for it to be staged in a myriad of venues.  The first Ballet to have the treatment will be their all new The Sleeping Beauty. 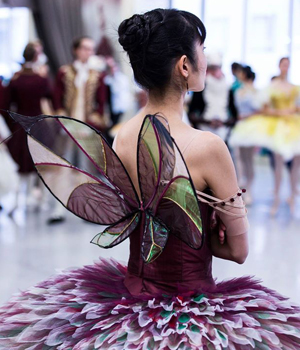 Choreographed by David McAllister from the Marius Petipa version, now integral to the repertoire, the costumes and sets exist and this “… will be a touring production performing up to three times a day and definitely not a dumbed down version for kids” said Christie. The first production will open in Melbourne, Sydney and Chatswood in December 2015. The 2016 touring schedule will include performances in Wollongong, Penrith, Canberra, Gold Coast, Brisbane, Caloundra and Logan, during school holiday periods with approximately 80 shows to be presented across four states. Further dates and venues will be announced in late November 2015. A dreamy kingdom full of magical fairies, a beautiful sleeping princess and a prince searching for his true love… the kids will lap it up. Dazzling dancing, sparkling tutus and enchanting Tchaikovsky music, Sleeping Beauty Storytime Ballet will be a perfect first ballet experience for both boys and girls. Both interactive and narrated it will be sure to cast its spell and have primary school children dancing all the way home! Kids will be encouraged to dress up in their favourite ballet-inspired outfit, making it great outlet for creative expression for all involved. “Telstra, already a Principal Partner of The Australian Ballet will also support Storytime Ballet and our vision for children’s programming” noted Libby. There is no doubt in my mind the Australian Ballet initiative will be a hit with both parents and kids and the perfect Xmas or birthday gift for tons of grandparents. Storytime Ballet: The Sleeping Beauty: Tickets on Sale Friday 16th October, 2015

A new exhibition at The State Library of NSW, Sydney will explore Max Dupain’s iconic Sunbaker image, alongside 15 commissioned artists re-imagining the artwork