If you fancy a fabulous weekend away, or a fine daylight saving extended Sunday, you can enjoy a superb Australian Brandenburg (ABO) treat of music and high tea surrounded by the delights of rural Victoria.

A concert will be held in the heritage Mansion Hotel & Spa at Werribee, Victoria, on Sunday 12th February 3pm – 5:30 pm, which is supported by The Lancemore Group, renowned for its award winning boutique hotels.

Werribee Park Mansion in the ‘Italianate style’ was built for Scottish born brothers Andrew (1818-1890) and Thomas Chirnside (1815-1887) between 1874 and 1876 to designs submitted by the architectural firm of Colquhoun and Fox. ABO musicians Ben Dollman and Stephanie Eldridge on Baroque Violin, Laura Vaughan on the Lirone/Viola da Gamba and Sam Cohen on Theorbo, will offer an afternoon event of timeless music from the Baroque era at 3:00 pm for 3:30 – 5:30 pm in an architectural setting whose forms and decoration traces its roots back to antiquity

This truly delightful quartet is offering a real treat, as they perform a program of mainly seventeenth century repertoire, featuring works by Italian musician composers including Andrea Falconieri (c1585 – 1656) who played the lute, Arcangelo Corelli (1653-1715), Nicola Matteis (1670-1714) and Salamone de ‘Rossi (1570 – 1630) who all played the violin.

Throughout the seventeenth and early eighteenth century in England and Europe, the influence of Italian models in architecture as well as vocal and instrumental music, helped it to gain supremacy. The Baroque style in architecture was distinguished by its grand manner, the frequent use of giant scale order as well as an emphasis on progression and recession, or, as later architects were to call it ‘movement’ in architecture.

Baroque style music with its glorious harmony and beauty had and still has, massive appeal.  Music based on the same mathematical principles of proportion and harmony present in architecture and gardens, became a triumph of structured symmetry and a model for the community and its life.

Known chiefly for his sonatas and 12 Concerto Grossi, Arcangelo Corelli’s works are considered classic of the genre, as he set the model of a century or so of instrumental music. He united all the threads of his colleagues into a magnificent whole, with melodies that soared boldly like the human voice, lyrically sublime.

Andrea Falconieri produced music the Mother Superior in the Santa Brigid Convent in Genoa in 1632, complained was ‘unsettling for the nuns’, before he went onto become maestro di cappella at the Naples Royal chapel.

Nicola Matteis became considered ‘second’ to Corelli, offering a musical experience that was both ‘polished and refined’, as he led the charge in London, which drew musicians from all over Europe.

English writer, gardener and diarist John Evelyn in his diary November 19, 1674… recorded that Matteis“… did wonders upon a Note: was an excellent Composer also … nothing approch’d the Violin in Nicholas hand: he seem’d to be spiritato’d & plaied such ravishing things on a ground as astonishd us all” Evelyn noted. Salamone d’Rossi became a transitional figure between the music of the late Italian Renaissance and early Baroque era, which is all about joy.

At the court in Mantua he started as a late Renaissance madrigalist, but then experimented with new forms including the trio sonata and suite, now considered early forms of Baroque music.

There is an overriding interest in the potential of the melodic line to inspire the listener. They were all after all, the vivacious Italians and helped expand the potential for dialogue between two equally important melodic lines.

This was highlighted in England by a veritable invasion of Italian instrumentalists, which occurred during the seventeenth and eighteenth centuries. Technical virtuosity is a feature, and interestingly, the way in which each composer interprets the musical style means that often they would have not sounded all that unfamiliar to each other. Abundance was a key element with Baroque music and the seventeenth century Baroque style of architecture combining to pack a huge emotional and physical punch, while reflecting individual prosperity.

The French Revolution, Napoleon Wars, Franco Prussian War, unification of German and Italy, and the America Civil war were all in part responsible for stimulating throughout the nineteenth century a search for a national identity and an enthusiasm for what were believed to be national architectural styles.

By the late nineteenth century in Australia, architecture based on Italian originals with additions was reflecting the traditions of new Australians and their glorious past, which had been inspired by those in England. Fabulous fortunes were being made in those heady days, especially in Victoria, which was a centre for the gold rush. Great estates were established with members of fashionable society wanting to prove they were on par with what was happening back ‘home’ in the United Kingdom.

Nostalgia driven, the architectural styles featuring characteristics gleaned from nearly two thousand years of development, provided evocative images for a nation trying to hold fast to its historical past, while rushing helter skelter via the Industrial Revolution, into the future. 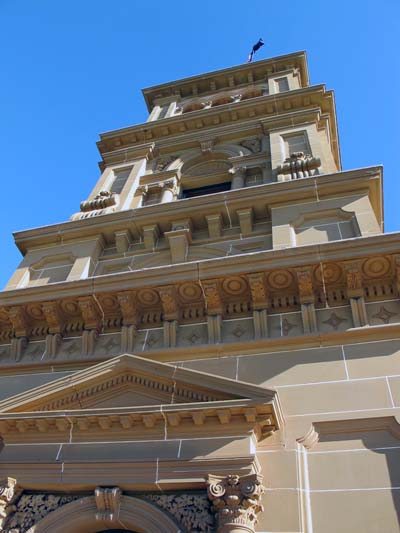 Thomas Chirnside, like that other great sheep man, John Macarthur considered many plans before building his country house for himself and his brother Andrew at Werribee Park, where fifty-eight cases of furniture from Edinburgh in Scotland were delivered and unpacked in 1877.

Some of it is still on display in a building with a tower that abounds in ornamental classical references.

Some thirty minutes west of Melbourne at Werribee Park, the hotel and spa offers luxurious 5 star accommodation in a wing constructed by the Roman Catholic Church when the mansion was once a training college for priests. At the essence of baroque music is something inherently beautiful, its ever-present accompaniment comprising of both harmonic and melodic bass string instruments is present in all places at the same time.

Werribee Mansion to me seems to be a perfect place to listen to and enjoy music in the Baroque style, while enjoying the English tradition of high tea. It will be a wonderful treat delivered by the ABO which deserves to be a sell out.

Join a myriad of events at Festival of Phryne celebrating the art, design and style of Miss Fisher’s Murder Mysteries and her stylish costume show at Rippon Lea