Producing unique sounds and bringing myth to life through a wonderful layering of musical textures, the Australian Brandenburg Orchestra (ABO) on March 7th, 2015 in the Elisabeth Murdoch Hall at Melbourne Recital Centre, provided a setting for the meeting of poetry and music in the realm of the sublime. The audience could be forgiven for …mistaking earth for Heav’n!

Handel Heaven and Harmony, the first program of six concerts for their season 2015, provided a platform to address the infusion of sacred and secular music that prevailed prior to the 20th century. This year all six concerts will be shown in Melbourne and some will be going to Brisbane including Vivaldi: Unwired

London based German born composer Georg Frideric Handel (1685-1759) was a showman and a king of entertainment. This was a simply superb program of his music with at the centrepiece Handel’s splendid Ode to St Cecilia’s Day, one of the great musical joys of the eighteenth century.

Richly rewarding, both playing and singing lingered long and resonated for hours afterwards, providing happy memories of a musical performance that engaged both the heart and soul.

Guest artists performing in Australia for the first time were Argentinian soprano Mariana Flores and the Portuguese tenor Fernando Guimaraes. Both singly and together as a duo, they captivated with their youth and vitality while engaging the audience at a deep spiritual level. They both offered sublime phrasing and a wonderful clarity of style.

He added delicacy and depth to the cantata “Look down, harmonious Saint”, his breath control admirable and his delivery dynamic, warm and convincing.

Mariana Flores seemed to glide seamlessly across the stage to reach the spotlight where she illuminated everyone when singing her solos with intoxicating sensuous beauty.

She certainly looked fabulous in a glorious gown in ‘Marsala’, the Pantone Colour of the Year for 2015, which our Fashion Elixir editor Jo Bayley would have been sure to approve. Starting the night his grand Sinfonia the “Arrival of the Queen of Sheba” from Solomon allowed everyone present to feel as if they had really ‘arrived’.

The musicians showcased sensitive restraint and great style wearing their all new tailored suits for guys by MJ Bale and fabulous frocks by Carla Zampatti for girls.

They looked for the entire world, as if they had just stepped out of the latest issue of Vogue.

The change certainly ensured they all had a considerable spring in their step. Buoyant and in a generous mood, they engaged the audience in a concert of rare and ennobling emotive intimacy. 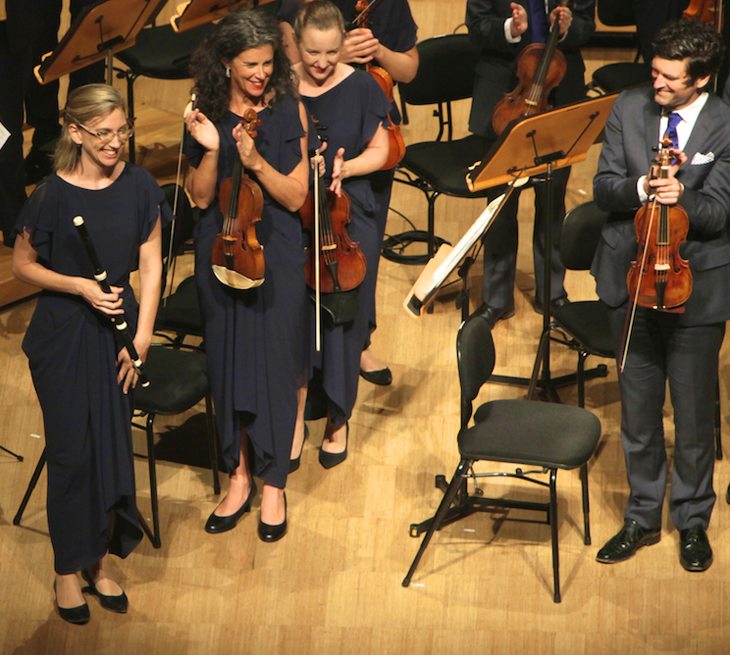 A sure hand at the Harpsichord, Artistic Director and Conductor Paul Dyer who infuses his team with energy and inspiration, skilfully guided their mastery of form and expression.

Also highlighted were Flautist Melissa Farrow, Cellist Jamie Hey, Viola James Eccles and Baroque Trumpet duo Leanne Sullivan and Rainer Saville, all of whom were a stand out.

In his poem of 1687 A Song for St Cecilia’s Day Dryden summoned by their associated instruments, ‘the terrors of war, the anguish of love, and the ecstasy of religious experience’ From harmony, from Heav’nly harmony
This universal frame began:
From harmony to harmony
Through all the compass of the notes it ran,
The diapason closing full in man.

John Dryden dominated the literary scene of his day which included the era from the execution of Charles 1 through the Commonwealth rule of England, Reign of Charles II, James 1 and finally, arrival of William of Orange and Mary in 1689. The Cantata, a vocal composition with an instrumental accompaniment often involved a choir. The Ode for St Cecilia’s Day written in 1687 commemorated the 22nd November, the day devoted to the patron saint of music.

Dryden was among the first of the poets invited to write an ode by the London musical society and his was a statement about sound penetrating primordial chaos, bringing both order and harmony when accompanied by music.

The ABO performed the work in two parts, one before and one after interval. The addition of the Brandenburg Choir in fine voice completed the musical picture.

As ever the singers and musicians were all enjoying themselves as much as the audience enjoys their performances, responding warmly at every moment they could.

As from the pow’r of sacred lays
The spheres began to move,
And sung the great Creator’s praise
To all the bless’d above;
So when the last and dreadful hour
This crumbling pageant shall devour,
The trumpet shall be heard on high,
The dead shall live, the living die,
And music shall untune the sky. For the last work on the program Marian Flores and Fernando Guimaraes wonderfully performed Handel’s love duet “Tra amplessi innocenti” from Cecilia, showcasing the on-stage chemistry and vocal purity they are becoming renowned for.

This first Australian Brandenburg Orchestra concert ended with ‘jaunty rhythms’ that were then added to as the guest artists generously provided an encore composed by you guessed it, Handel – “As steals the morn” from L’Allegro, il Penseroso, ed il Moderato”.

This ensured that everyone on and off stage left in a mood of joyful celebration.

On December 9 the V & A at London, will open a new suite of seven galleries with nearly 1100 objects that best tell the story of the evolution of art and design