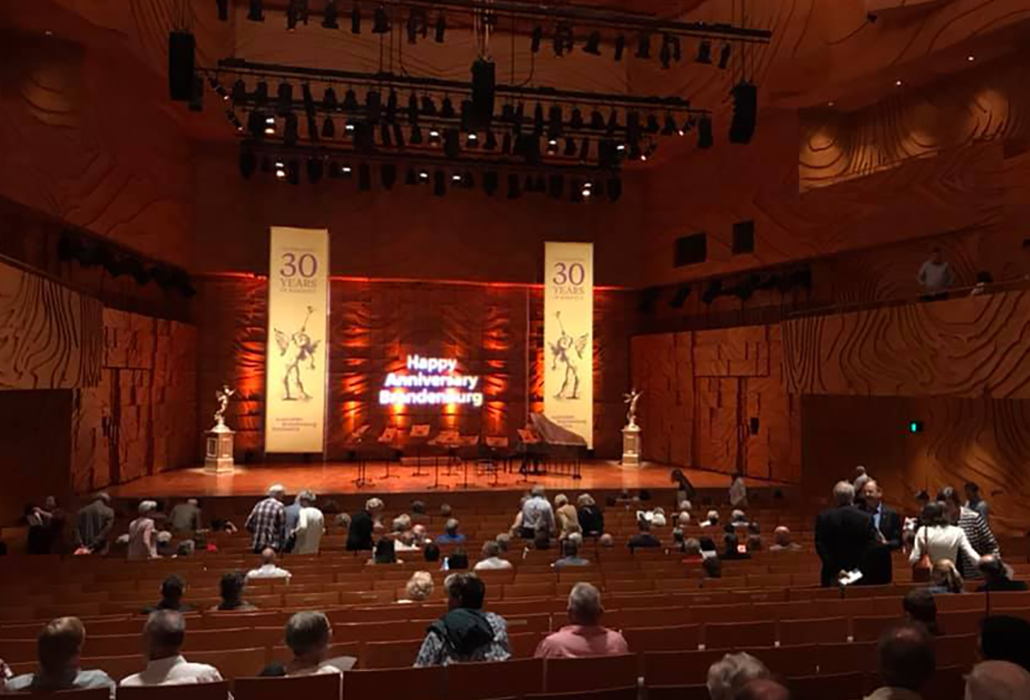 Named for Christian Ludwig, Margrave of Brandenburg, to whom they were presented in 1721, the concertos were meant to impress this great patron of the arts, who was known to be passionate about his music.

Subsequently, they have held a special place in the history of musical achievements ever since. 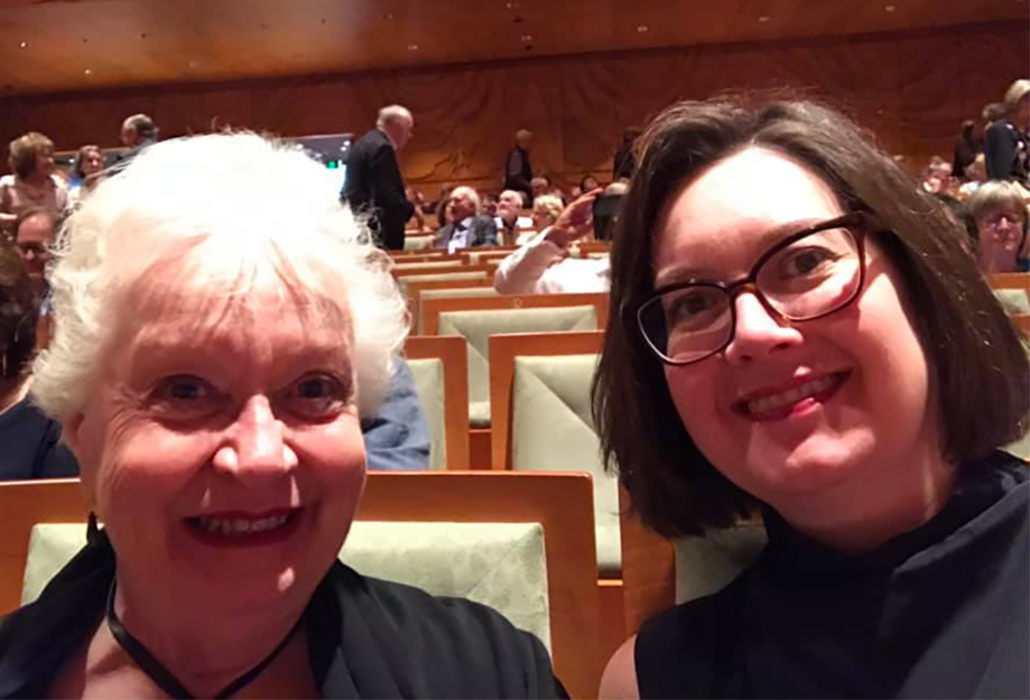 My companion and I found this very special thirtieth celebration evening both breathtakingly joyous and wonderfully warm-hearted; on the night the ABO gave a powerful and personally satisfying performance, a fact confirmed by the happy expressions on all the musician’s faces, and indeed on ours as well.

Streamers flew profusely throughout the auditorium at the finale, revealing just how much the musicians professionalism is appreciated by those who consider themselves fortunate to both enjoy and witness the magical moments the ABO so brilliantly provide for lovers of Baroque music. Artistic Director and harpsichordist Paul Dyer AO intrigued us all as skilfully, with each concerto’s stunning interpretation. He boldly balanced Bach’s eloquent phrasing through the consistency of his approach. He presented each work as one of sheer beauty, hallmarked by its elegant simplicity; perhaps the most difficult of all lasting impressions to make.

Dyer and his musicians honoured their hero and his legacy, by approaching the vast breadth of sound for each concerto as if it was being encountered for the very first time; managing to present each one as a fresh new challenge. 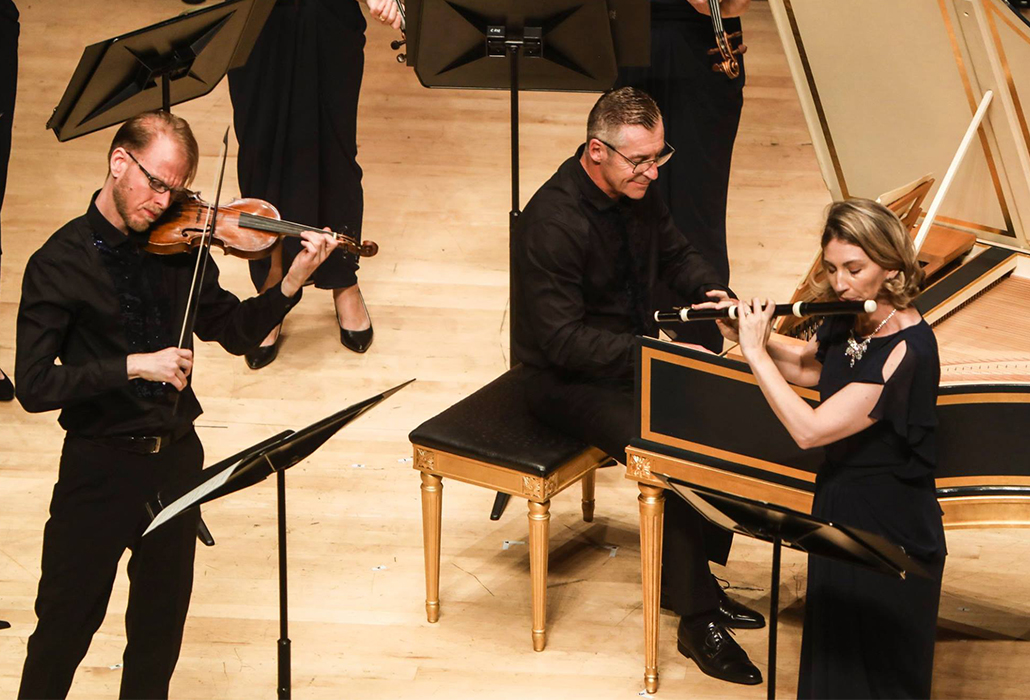 Ben Dollman on Violin, Paul Dyer on Harpsichord and Melissa Farrow on Baroque Flute, for the 30th Celebration for the Australian Brandenburg Orchestra photo by Steven Godbee

Acting as our guide, Paul Dyer coaxed his musicians to reveal the wide and wondrously expressive range of their talent, while satisfying their virtuoso demands. Each was individually given a moment to shine, while showing off their period instrument’s unique sounds and their technical prowess.

Dyer, as is his way, also gifted the audience with a reason to contemplate the real man behind the images we have of Bach. He can often seem a ‘dour’ fellow; his few surviving portraits failing to reveal the hidden depths behind the public mask. So if we seek to know him well we must turn to his music, which provides us with a fascinating way to approach his genius. 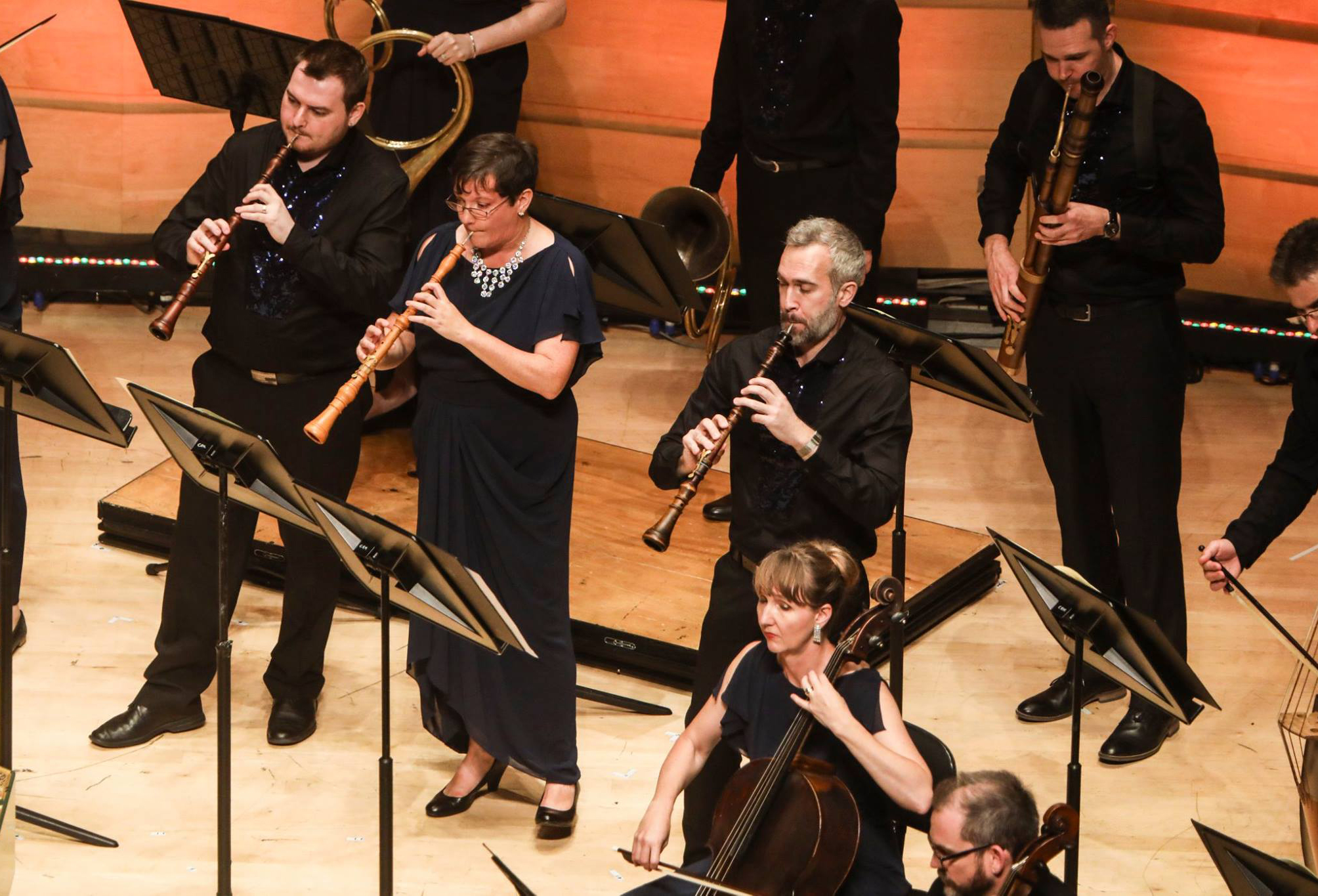 L to R, Kailen Cresp, Kirsten Barry and Christopher Palameta on Baroque Oboes with Brock Imison on Baroque Bassoon for the 30th Celebration for the Australian Brandenburg Orchestra photo by Steven Godbee

Bassoon to oboe, recorder and flute, French horn to viola and on to violin, cello, bass and harpsichord, while exploring the full potential of each musician and their instrument in each concerto’s form, J.S. Bach produced this completely dashing set of works in scintillating style; so much so today he is regarded as at a pinnacle of composers excelling in the creation of music for western civilization.

Originally titled Six Concerts à plusieurs instruments, the concertos have invaded the imagination of his audiences over the centuries because they admire his extraordinary ability to bring about such a remarkable synergy between nature and art.

Bach had this to say “The thorough-bass is the most perfect foundation of music… resulting in ‘a well sounding Harmonie to the Honour of God and the permissible delight of the soul”* he said.

One of the most accomplished musicians of his age, Bach’s reputation was achieved through works, both sacred and secular, which like these concertos reach out to tenderly touch our heart and soul, as we search to know what is at the essence of a good life.

Paul Dyer created an exciting progression for his fans and followers in terms of tempo, the works and their melodic configuration, their harmony, dance like rhythms and glorious colours. 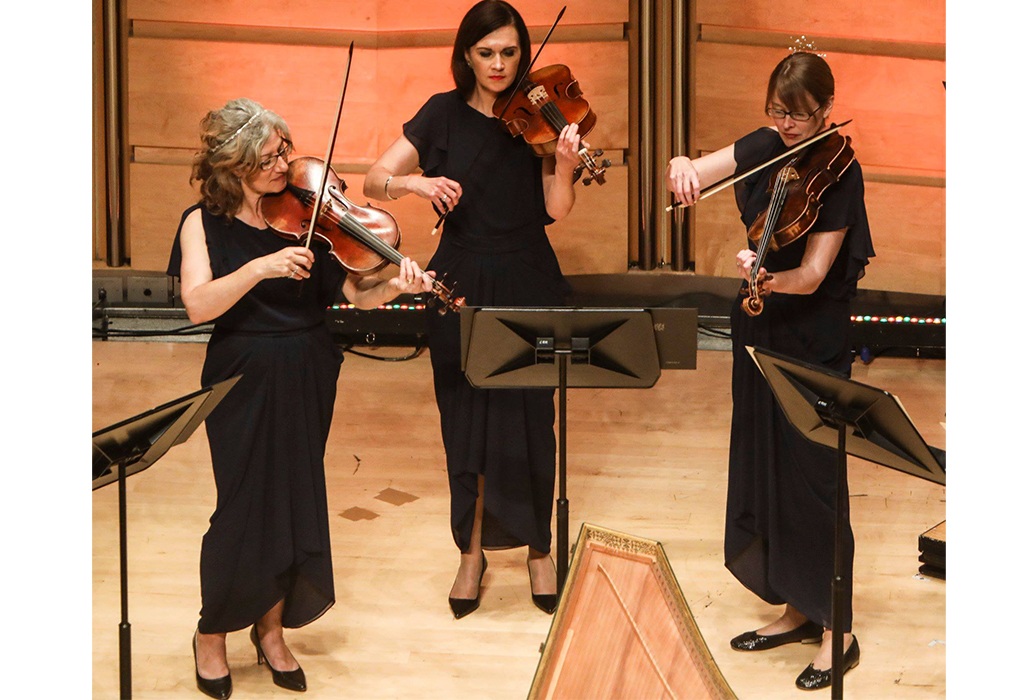 Trio of Violas; Monique O’Dea, Marianbne Yeomans and Deidre Dowling for the 30th Celebration for the Australian Brandenburg Orchestra photo by Steven Godbee

He created a connection between movements, ensuring the conversations that took place between all the soloists playing on the night, were all the more remarkable.

He left us with a happy task; to explore the potential of the concerto form itself, which J.S. Bach so brilliantly reinvented himself with each new composition. 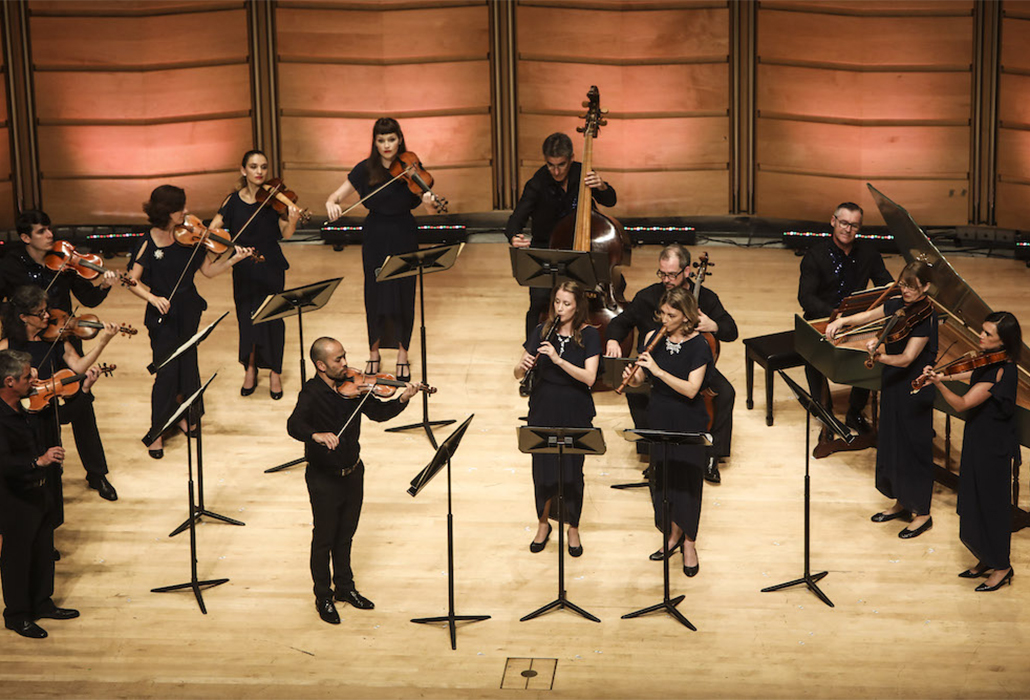 Shaun Lee Chen on Violin with members of the Australian Brandenburg Orchestra, photo by Steven Godbee

Number 4’s joy filled first movement was a great way to start. Shaun Lee-Chen’s dazzling virtuoso display of violin playing magnificently impressive, as he echoed the resonating sound of the recorders, taking up the theme of a Bach fugue; a work of great character.

Concerto No 6 has multiple blessings and on the night was both bright and haunting at the same time; the soloists playing perfectly, with the delicious sounds of the harpsichord like the icing on the top of our celebration cake. 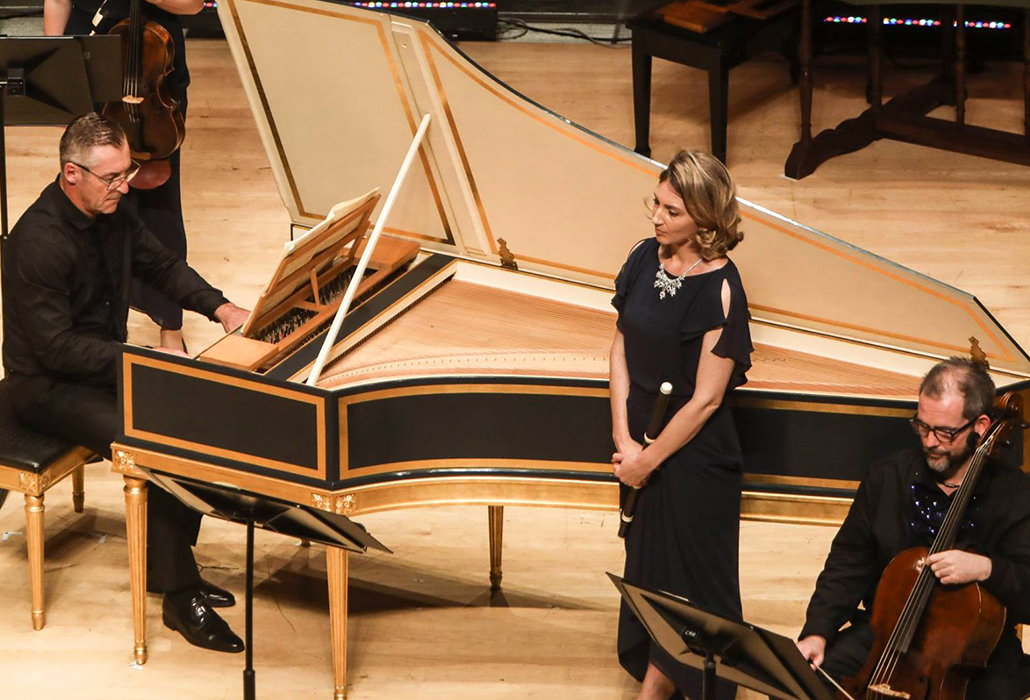 Paul Dyer on Harpsichord, solo in Concerto No 5 in D major, for the 30th Celebration for the Australian Brandenburg Orchestra photo by Steven Godbee

Must admit I particularly love Concerto No 5 played just before Interval. While pleasantly playful, witty and brilliant, Bach gives the harpsichord a perfect place to shine with youthful eloquence.

More than special on the night, Paul Dyer’s heart was clearly connected to his hands on the harpsichord in a truly remarkable way; his solo was indeed sublime; both highly personal and passionate. 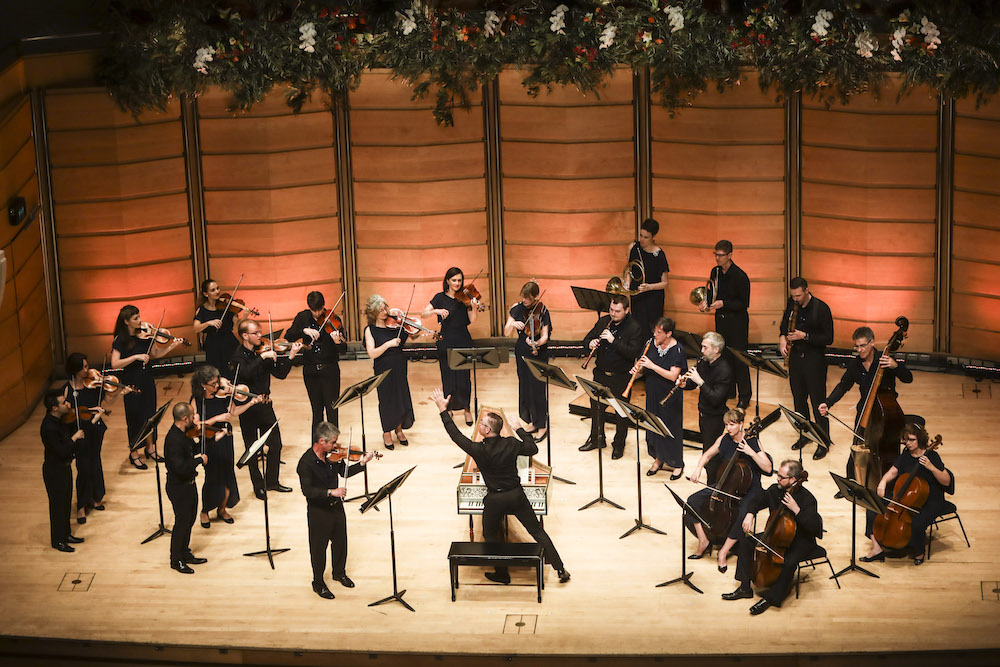 Having been involved in choirs all my life, I have been blessed to be involved in performing so much of J.S. Bach’s music over six decades, that I feel a very special connection of my own with so many of his greatest works, as well as those who enjoy to perform them, as was so obvious here.

Bach’s compositions are not only joyous to follow, but also thought provoking.

This was especially true after interval via the jaunty style of the delightful counter-melody’ in Concerto No 1, which unlike the chosen ensembles for all the other concertos, requires the full orchestra. 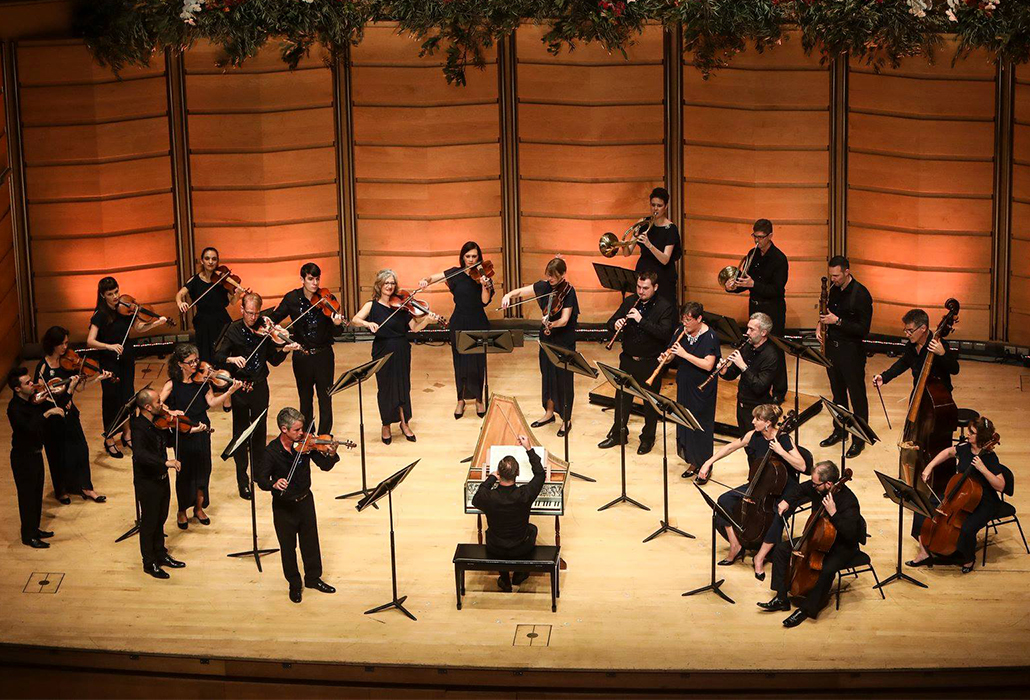 ABO musicians passionately performed his marvelous Concerto No 1’s beautifully inflected slow movement with great care and love and, as a whole, presented this wondrous work as being entirely luxuriant.

J.S. Bach wrote for both the church and for intimate gatherings; it took the world a century following his death to realize all he had achieved and why his works gradually have become considered ‘a classic’; of renowned excellence. 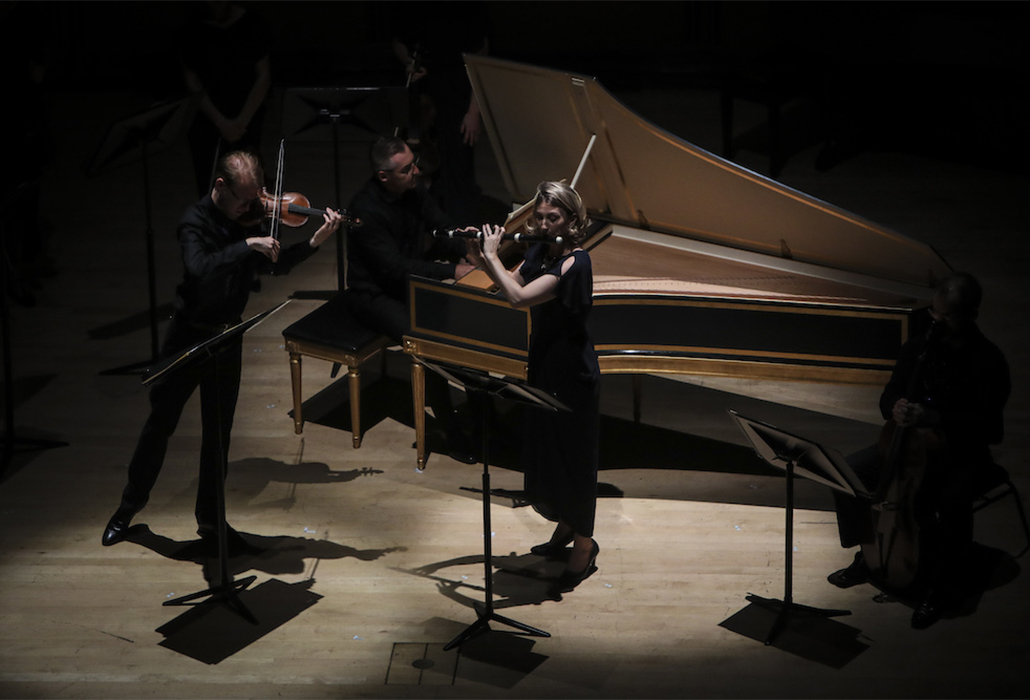 This amazing celebration of J.S. Bach’s ability to create Baroque beauty, for its grand finale performed his stunning Concerto No 3 for strings and harpsichord.

Perhaps one of J.S. Bach’s most well-known, this concerto never fails to infuse my heart with the wonder and sublime majesty of the master’s music. 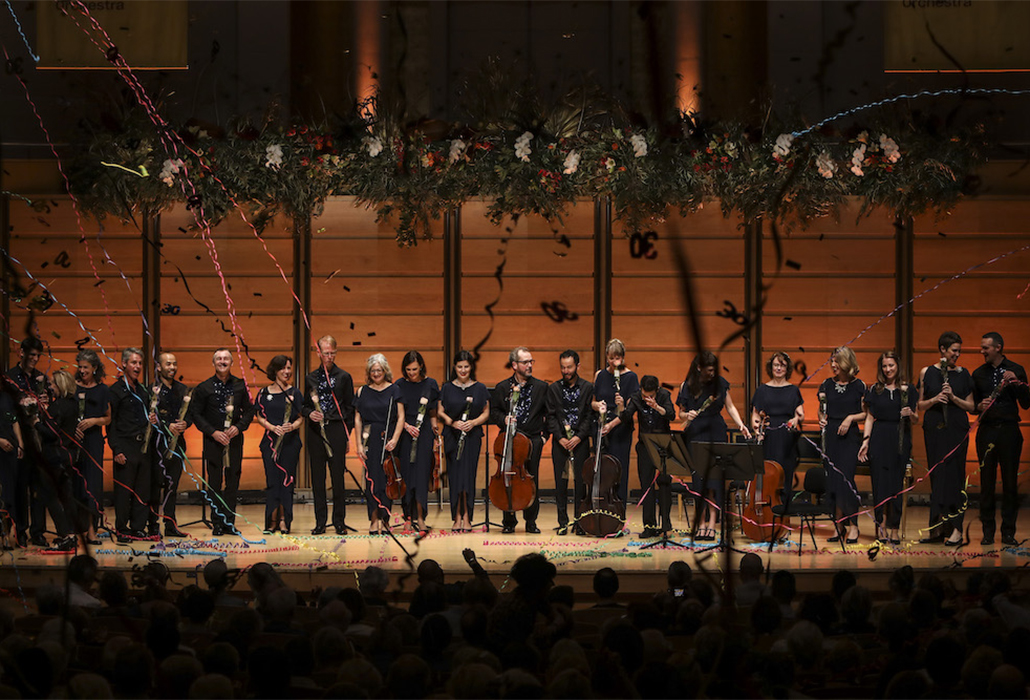 J.S. Bach was indeed the crowning glory of one of musical history’s greatest chapters to date and it’s easy to see why Paul Dyer and MD Bruce Applebaum founded the Australian Brandenburg Orchestra; for the love of the music and the man, whose life spanned much of the Baroque era in music (1600 – 1750)

Long may they continue to enchant us all.

The Australian Antiques & Art Dealers Association Fair will be held in the stunning Royal Exhibition Building, Carlton Gardens Melbourne from 8 – 11th May 2014