The people, the space, the music and the experience; both sacred and secular; the splendour of the celebratory performance of the Australian Brandenburg Orchestra on Saturday night 22nd February 2014 at the Melbourne Recital Centre soared way beyond all boundaries. They delivered great works of marvelous music by great performers into all our lives.

The Brandenburg offered a program anchored and inspired by the simply magnificent music of one the greatest of the German master composers; Johann Sebastian Bach (1685-1750).

We were all quite mesmerized, the audience happily worshipping at the font of Bach, the Brandenburg’s indomitable leader Paul Dyer AO, the Australian contemporary composing genius Elena Kats-Chernin and an outstanding group of performers. They collectively provided a creative platform on which artistry and innovation met, ideas were shared and the knowledge of great music expanded.

After interval they embraced the secular, playing Bach’s beautifully rendered Orchestral Suite No 4 in D Major. Going then beyond Baroque, everyone entirely embraced Kats-Chernin’s Prelude and Cube.

This was a highly complex but outstanding homage by this master contemporary composer to her historical colleague, J.S. Bach, which was easily accessible to all. It sounded simply wonderful and I have to admit my Brandenburg buddy and I found it hard to sit still we were so enthralled.

They perfectly illustrated, with crystal clarity and conviction, the glories of the Latin text Magnificat anima mea dominum – my soul praises the Lord highly. The whole was a sophisticated blend of musical magic as they delivered each of Bach’s memorable twelve movements like mini musical gems.

It was startlingly powerful, entirely dense with musical imagery; intimate, intense and achingly tender, full of the joys of both love and life

Dyer with great dexterity leaped from  his harpsichord to his podium as conductor, helping them all transcend time and space with understated excellence.

This mighty work of Bach requires very special handling; The Magnificat is a sacred work not really meant as an ‘entertainment piece’, but one designed to aid worship and devotion, while leaving congregations awe struck.

At the time it was composed it certainly must have helped the congregation of St Thomas’ in Leipzig celebrate the joyous news of the birth of Christ.

The first public ‘performance’ was on Christmas Day 1723, so it is in that celebratory vein we can all applaud today its sheer exuberance and joyfulness.

As the choir’s voices entered in a rejoicing mood, but full of lightness and grace, the audience’s spirit was raised high.

Layer upon layer the voices overlapped, representing all the former generations’ of worshipers who had also wondered at its power to help us perceive what for many seems impossible; the visible expression of something profound and invisible.

This beautiful song for Mary has many demure moments, which the orchestra sensitively rendered with all the mellowness and beauty their original instruments would allow.

Through Bach’s always-caressing roundness of tone, we could feel the sense of calm the shepherds watching their flocks by night must have embraced as that bright evening star rose so relentlessly in the sky so long ago.

Bach didn’t compose his Magnificat full of great arias for soloists to sing, but rather provided short contemplative episodes of musical relief so that beauty could shine through all that adulation.

They punctuated the rising and soaring melodic phrases that exalted us all, and we were more than twice ‘blessed’.

Countertenor Max Riebel’s ‘filling the hungry with good things’ was strengthened superbly by the outstanding playing of recorders and cello, making his contribution entirely memorable.

Over the past year I have been privileged to hear some of the world’s most outstanding contemporary countertenors sing.

For me Riebel was like adding another well-lit candle to the top of an already glorious cake.

He achieved a wonderful clarity and pitch-perfect purity of sound that saw him enter a sublime dimension of his own, one that should keep people coming back for more.

Soprano Jane Sheldon has such a sweet sound that her solos were very special, sung from the heart to nurture the soul.

He ‘put down the mighty from their thrones, while raising everyone else up.

The final Gloria Patri, gloria Filio, gloria et Spiritui sancto – glory to the Father, glory to the Son, and glory to the Holy Spirit was like all the angels in heaven shouting out sensational songs of praise.

By the end the themes established at the beginning of the piece had returned, but they were now transformed as indeed we all were, into a state of exultation that Bach perhaps hoped would last for eternity or at least …until all things had been made anew. After interval Paul Dyer grabbed a microphone and regaled us with terrific tales of 25 years.

It was a poignant moment, allowing the audience a collective moment to celebrate and say thank you through acclamation to Paul Dyer and co-founder Bruce Applebaum for their wonderful vision.

We were then all able to settle down and enjoy Dyer ‘getting down’ with his ‘core’ team by playing Bach’s wonderful but rarely heard five movement Orchestral Suite No. 4 in D major.

Bach only wrote four such compositions. This one emerged during a period where he also penned some of his other great works, notably his acclaimed cello suites. 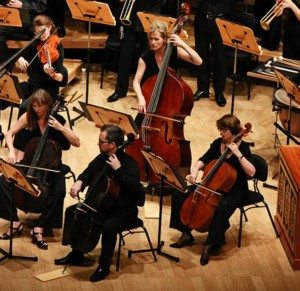 This is the point to note that Jamie Hey, lead Cellist for the ABO last night really stood out. He certainly had me hoping they may have him play a solo ‘cello suite’ of his own in the future.

The playing of this adventurous piece was a sheer delight. With luscious shades of ‘Lully’ bearing down upon us, the Orchestral Suite No. 4 in D major by Bach was like a beautiful dance held in the Hall of Mirrors at Versailles.

It was all at once reflective, well choreographed and smoothly delivered, foreshadowing the early eighteenth century vision of the ‘fete Galante’ as  illustrated profoundly by Jeanne Antoine Watteau (1684-1721) in his small exquisitely painted cabinet pictures, which were meant to explore the psychology of love.

It was a highly personal style in which the sophisticated pleasures of the beau monde were rendered poetically. We could all well imagine in our minds eye an eighteenth century musician playing his music while a lovely lady, perhaps his lover, looking on and listening while pondering the beauty of the lyrics as they basked together with friends in the glory of nature; an idyllic landscape setting. Easy to see why masterful pieces like this went down well at eighteenth century elegant garden repasts. The larger than life lofty tones had a refined quality all of their own.

This beautiful piece runs for just under 20 minutes long and the Orchestral Suite No. 4 in D major proved to be a stylish musical epiphany with an accidental beauty that was as light as air.

The final movement was a réjouissance, a rare movement for Bach, reflective in character, bright and with a quick tempo that truly delighted. The Orchestral Suite No. 4 in D major was indeed a crowd-pleaser, as was the next piece to come. Elena Kats-Chernin’s Prelude and Cube was a triumph.

Expansive, opulent regaled with the pomp and passion Kats-Chernin was indeed trying to achieve, this marvel of contemporary music was full of colour and emotion and my Brandenburg buddy and I loved it. Discussing it afterward we both agreed that it had transported us both off to another time and place.

For me it was into a headspace I used to enjoy when taking in a marvellous Hollywood musical movie at the Boomerang picture show at Coogee Beach in Sydney when I was a kid.

It had zest, playfulness, grand themes, rich textures and layer upon layer of beautiful sound that once again had the choir resonating off the superb acoustical space of the recital hall and losing themselves in lofty heights.

It was all about Bach and the Baroque, it had movement in music, progression and recession and confounded everyone in the ‘grand manner’ of the Baroque style.

As she echoed and reinvented Bach everyone was employed, every instrument of the orchestra elevated, every performer raised up in both rank and character.

It stimulated the imagination, had many moments of elation marked with great pride and joy, and yet it was still often quite elusive. It was all about quality, and most especially about honour. In a conversation following the performance Elena Kats-Chernin revealed composing it for such a special occasion had been an honour. It was a way of respecting a very fine colleague she had collaborated with since their conservatorium days. It was also a way of showing regard and esteem for one of the greatest composers of all time and she certainly did him proud.

The audience loved every moment of her marvelous homage to Bach and his genius. Elena Kats-Chernin’s work retained beautiful harmonies for all the Baroque period instruments to play.

Then there was the addition of an organ which added depth and richness of tone. The final sublime note of the ‘soprano saxophone’, which soared high above them all provided a powerful punctuation mark; the final layering on a layer cake so rich we will all be digesting it for days to come.

Elena Kats-Chernin’s homage to Bach took us way beyond Baroque, way beyond our own contemporary world towards a future where the art of both past and present will always be savoured and respected.

The Australian Brandenburg Orchestra has become one of Australia’s most unique and special music institutions. They never fail to send me out of their concerts elated, feeling as if I have just truly witnessed a miracle.

They offer in each carefully selected program a powerful form of communication vital to our inner well-being.

For the first concert of their 25th anniversary year the Australian Brandenburg Orchestra exceeded expectations. They reflected the classical maturity of our society while raising awareness and appreciation for our very special musical and cultural heritage – Baroque and beyond.

Just as we all thought our concert had come to a stunning conclusion, so Paul Dyer once again quickly took up his baton. He then led us into an encore and an all new area of Brandenburg expertise. The stunning Raise Your Voices* came courtesy of the sensational award-winning Irish-Norwegian duo Secret Garden, aka Rolf and Fionnuala. The song chosen was so perfectly appropriate and finally ended an evening of pastoral pleasures on a truly high note of excellence. It was like a magical combination of Welsh choir magic combined with Baroque glory, while the wonderful words fulfilled the whole poetic vision of the early Baroque!

Congratulations to all concerned, including the behind the scenes team and the supporting sponsors.

They enable the players, helped to embolden us all and to ensure that during the next 25 years the stories written about the Australian Brandenburg Orchestra will remain an ongoing saga of rich, remarkable experiences.

*As an aside Secret Garden also wrote the smash hit You Raise Me Up made so popular by Josh Groban.

The Cheapside Hoard, London’s Lost Jewels found in Edwardian times will be on show at the Museum of London from October 11 2013, dazzling with their brilliance