Building his program for the third concert in the 2016 subscriber series, violinist, conductor, composer, Artistic Director and leader of the Australian Chamber Orchestra (ACO) Richard Tognetti, AO says “We begin this concert with the greatest polyphonist of all time, the unearthly splendours of Bach and his uncanny ear for making multiple parts speak and sing as one in his Fugue in D major. We conclude with Beethoven’s enigmatic, Grosse Fugue,a  hyper-controlled cacophony rousing responses ranging from rapture to confusion”.

However it is his fugues today that particularly attract people of passion, who revel in their unorthodox style, great drama and the virtuosic skill required to surmount their technical challenges. The fugal form with Bach found its “unity within variety to be the perfect symbol of the omnipresence of God”. Today they still light up many a gathering of the faithful.

This is the ACO’s third national tour for 2016, in a series of programs that have been built on the mightiest classical pillar of all, Ludwig van Beethoven (1770-1827) and his compositions.

The ACO will take on his most influential masterpiece in The Art of Fugue, Beethoven’s epic Grosse Fugue, ‘considered one of the finest pieces of chamber music writing in the history of western music’. Published in 1827, it confounded critics and connoisseurs with its concept and he ‘pushed the limits of human musical understanding’ with its form, ensuring that it retains its right to be called an ‘avant-garde work’ all these years later.

Works by Wolfgang Amadeus Mozart (1756-1791) are always a potent ingredient from the man whose union of poetical and musical creative ability was a gift to the world. As a child his travels around Europe meant Mozart was able to unite the musical treasures of all nations, which could have been a disaster, but instead was a triumph. He was enchanted by the sorcery of singing.

Tognetti offers an experience of Mozart in between Bach and Beethoven that exhibits “… his operatic DNA in his fifth and final violin concerto, earning its nickname the Turkish through the pervasive influence of the exotic colours of the Ottoman Empire.”  It features the swirling Turkish music Mozart had used in a 1773 production of his opera Lucio Silla. 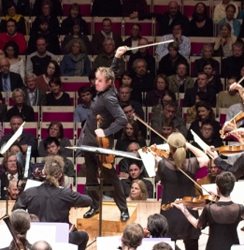 The second week in March 2013 was a busy one in terms of arts and culture in Australia. The Art Gallery of NSW announced its bold vision and master plan for its future and the Australian Government announced its Creative-Australia National Cultural Policy after over a year of deliberation. Early…