Good news out of Sydney, Australia on December 1, 2015, when Chairman of the Board of the Australian Chamber Orchestra announced the appointment of experienced arts administrator Richard Evans as Managing Director starting in early April, 2016.

Mr Belgiorno-Nettis said the ACO Board greatly welcomed Richard Evans’ appointment as he has the experience to build on the orchestra’s already outstanding national and international reputation.

In his role at the Sydney Opera House (2008 – 2012) Richard oversaw some 2,500 events annually, which attracted over $200 million in major capital works funding.

He also established a number of new festivals and activations, significantly developing the public domain while presiding over a period of unprecedented economic, brand, tourism and audience growth.

Evans has climbed many ‘bridges’ during his own lifetime, working at every level of the performing arts, including theatre, dance, and music. “I have long been an admirer of the Australian Chamber Orchestra. It is an honour to have the opportunity to work with Richard Tognetti, the musicians, staff and Board of this remarkable organisation.  The impact the ACO has had on the musical and broader cultural life of Australia has been immense, and I look forward to being part of the journey in the next phase of their national and international development.”

Today every great artistic director and leader of any great music group must be in tune with those who lead the significant souls required to help them to bring their vision for musical excellence to fruition. It must be a collaboration of hearts and minds. “I’m delighted to work with Richard Evans, a man whose reputation is vast. He has left a positive impression at all the companies he has led. I look forward to working with Richard to guide the ACO to another level. The timing couldn’t be better for the ACO, as we embark on a number of new and exciting projects.”

An experienced CEO at the Opera House for four years, non-executive director, cultural precinct leader, producer, and public servant Richard Evans has also held roles as Executive Director The Bell Shakespeare Company, Managing Director Sydney’s Bridge Climb and Executive Director of The Australian Ballet (2002 – 2007), one of the busiest and most artistically acclaimed dance companies in the world

In his role with The Australian Ballet, I was privileged to work with Richard Evans and his splendid team between 2002 – 2005 for their 40th anniversary gala and other landmark events held in Brisbane while they were establishing their seasons there. 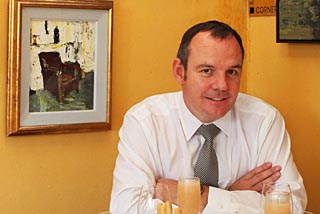 Richard Evans has a solid record of commercial management, growth and government relations behind him and hd will be sure to provide new insights and help plan new strategies that will build on the ACO‘s reputation for excellence around the world.

Not resting on his laurels is a wonderful trait, as he brings his considerable experience for planning in the arts, culture, events, the broader community and cultural infrastructure and development environments to the fore.

His significant international experience and networks should stand him in good stead for an anticipated explosion of creativity to follow.  It’s warm congratulations all around.