The Australian Chamber Orchestra (ACO) has inherited a fabulous legacy of music to perform in its established repertoire. However in the finest of all musical traditions, under the direction of Richard Tognetti it continues to grow expanding its musical conversations to include new adventures in stylish sound. Its early beginnings in 1975 in Australia was as a chamber orchestra in the traditional European style. But then in 1990 a young genius of our age burst onto the stage and, like Mozart in his day, added to the scale and scope of the orchestra. It was one of my greatest pleasures in life to be there the night Richard Tognetti at 23 years of age, arrived on stage to pick up the baton. It was memorable.

Richard Togneti has established an international reputation for his compelling performances and artistic individualism. Appointed an Officer of the Order of Australia in 2010, his 20th anniversary with the orchestra, he  was also made a National Living Treasure in 1999. He performs on a 1743 Guarneri del Gesù violin, lent to him by an anonymous Australian private benefactor. Up until his time the orchestra was traditionally dressed in tailcoats and seated. The first thing he did was have his players stand. That may not seem like much to do, but at the time it was sheer genius really. Because from that moment on, as he turned his youthful fellow performers into stylish soloists he gave them the self confidence to become a close knit team that spoke as one voice, which meant their stylish musical conversations would always be heard and always be in tune.

While its roots are in the medieval and Italian Renaissance periods of Europe during the eighteenth century chamber music was performed for pleasure by a group of musician friends at home and it gained a faithful following. As the stories of their intimate performances, in a variety of configurations spread, powerful potentates, patrons and princes began commissioning music to be played in the courtyards, on the balconies of their villas or, in the newly paneled private salons of their palatial palaces. 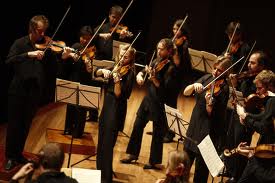 Sonatas, serenades, nocturnes were played by string quartets, trios, duos and wind ensembles. Austrian composer Franz Joseph Haydn (1732-1809) created and established a conversational style of composition that formed the foundation for the chamber orchestra of today. His contemporary and pupil Wolfgang Amadeus Mozart (1756-1791), greatly expanded the vocabulary of chamber music pieces, contributing both his energy and enthusiasm.

He made the strings act as a counterpoint to the keyboard while ensuring their collective voice was integral to the success of the conversation. He added the clarinet, which had not long been invented, its haunting rich tonal quality enriching the sound of the strings, violins, violas and cello adding a whole new dimension. And, other wind instruments would follow. Haydn was both friend and mentor, and Mozart’s genius inspired the elder composer to say passionately to his protege’s father words to the effect ‘I tell you before God as an honest man that your son is the greatest composer known to me either in person or by reputation. He has taste, and, what is more, the most profound knowledge of composition’.

Today the ACO is internationally renowned and has a virtuosity and energy unmatched by other ensembles. The orchestra and its leader is proud of its history and musical integrity, its maintenance of high performance standards and its practical investment in the future for young artists. Put quite simply chamber music is an intimate exploration of musical performance, which in a social atmosphere moves hearts and inspires minds. You can discover for yourself why this vibrant ensemble is now considered by many critics, fans and musicians as “the best chamber orchestra on earth”. Subscribe to the ACO

Playing for the Prince of Wales

Opera Australia’s Rigoletto blurs the boundaries between ‘anarchy and respectability’ and above all reveals how we handle the two imperatives; power and revenge