There is no doubt for the past twenty five years in Australia the artistic director and lead violin of the Australian Chamber Orchestra (ACO) Richard Tognetti has re-written chamber music history in this country, and indeed internationally as well.

I often reflect on the fact that I was a subscriber to the ACO BT (Before Tognetti). His arrival on stage in 1989 was immediately a knock out. He literally took the classic music world in Australia by storm age 23 and he’s never looked back.

In 2015 Richard Tognetti will be celebrating 25 years as ACO leader, while the orchestra itself will celebrate 40 years since its establishment. During that time Tognetti has been at the helm of many landmark music events in all sorts of venues, showcasing works that embrace music in all its forms across every spectrum imaginable; from the beat, beat, beat of a refuse bin to the most exquisite playing ever heard on a violin. Not only has he led its success, but he has also been instrumental in safeguarding and securing its future.

Richard Tognetti is undoubtedly a foremost innovator in terms of musical programming in Australia. He has over the years offered repertoire and experiences to the orchestra’s subscription audience that are not only challenging to their perceptions of what a ‘chamber orchestra’ should be playing, but also more than that too. Works at the cutting edge of musicianship.

Some guest artists the ACO has introduced to audiences under Tognetti’s stewardship have been more than exceptional. 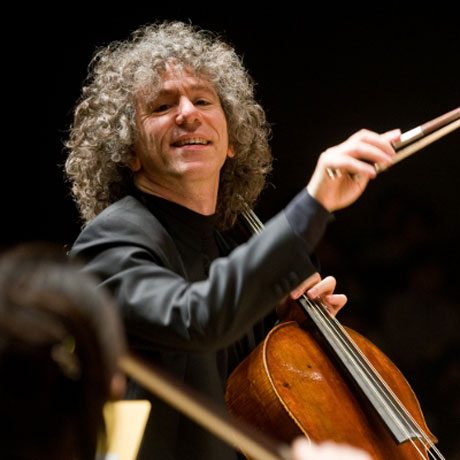 From musicians like mind blowing cellists Steven Isserlis and Peter Wispelway to sensational cabaret performer Paul Capsis, and from cartoonist Michael Leunig to include the talented visual artists, Shaun Tan and sensational photographer Bill Henson, the range of programs devised over the years historically have been sensational and document a premiere list of international creative minds and musicians.

Tognetti has performed himself individually to great acclaim and thunderous applause on his extraordinary 1743 Carrodus Guarneri del Gesú violin, as well as on modern and electric instruments.

He has guided the orchestra in winning four Grammy awards for recording, winning three Aria awards himself in 2006, 2007 and 2008 with recordings of Sonata and Concerto works by legendary German born composer Johann Sebastian Bach (1685-1750).

Today with over 10,000 subscribers, the ACO offers experiences across Australia and can call itself truly national. Its ACO2 is a critically acclaimed string ensemble that nurtures its emerging artists and is led by his colleague and brilliant violinist Helena Rathbone.

She also leads the ACO’s regional touring and education programs to all states, including Tasmania where she is a regular guest with the Tasmanian Symphony Orchestra.

Helena plays a 1759 Guadagnini violin loaned to her by the Commonwealth Bank.

The Basel Chamber Orchestra will be special guests in 2015 appearing in Brisbane, Sydney, Canberra and Melbourne which will be reciprocated when the the ACO performs in Switzerland in 2016.

The program for 2015 will include a celebration of the 100 years of ANZAC with Reflections on Gallipoli brought together by Neil Armfield, who will be sure to bring the whole idea of Australian mateship forged in that historic battle to the fore.

The words of army officer, reformist statesman, and the first President of Turkey Mustafa Kemal Atatürk (1881-1938) are inscribed on the memorial stone overlooking ANZAC Cove.

You, the mothers, who sent their sons from faraway countries wipe away your tears; your sons are now lying in our bosom and are in peace. After having lost their lives on this land they have become our sons as well’.

These words are the inspiration for works to be played including a new commissioned work by Australia composer Carl Vine, which will be set to the text by Atatürk. The program will also include English composer Vaughan Williams great romantic work The Lark Ascending, which has been voted Britain’s favourite piece of classical music and reputedly composed to a backdrop of ‘military manoeuvres’.

He joined the Royal Naval Volunteer Reserve with his friend, the poet Rupert Brooke

When Brooke fell ill and later died on the way to Gallipoli, Kelly was by his side. Soon after Brooke’s death Kelly wrote this haunting string serenade in his memory and it became part of his own memorial too, because he died in action in 1916.

They will start the season with Italian composer Antonio Vivaldi’s popular and much loved ‘Four Seasons’ that will be given yet another reincarnation by Richard Tognetti and Joseph Tawadras on Oud and Percussion. Egyptian born Joseph Tawadras (b 1983-) came to Australia when he was three years of age.

His roots are in a musical tradition that included his maternal grandfather being an outstanding oud and violin virtuoso, who became a considerable influence on his grandson’s musical development.

Today Tawadras own style is distinguished by his own improvised content, born out of tradition but embracing advanced techniques and applications in oud performance.

The subscriber season 2015 has many features, Mostly Mendelssohn, Egarr and the Golden Age, A French Celebration, Brahms 3, and Olli Mustonen Bach and Shostakovich. To end the season Tognetti will lead the orchestra as they play the last three symphonies by eighteenth century Australian composer Wolfgang Amadeus Mozart composed in the summer of 1788, distilling his genius into their pages.

Their genesis is ‘shrouded in mystery’ because he left no notes about them or evidence of a commission for them. This was unusual for an age that documented nearly everything on paper, leaving the subject wide open for scholars to speculate about.

They demonstrate many Mozart moods; #39 is gentle and modest really, while yet serene and exceedingly well-mannered

#40 has gravitas and is entirely reflective.

#41 now known as the ‘Jupiter’, a sobriquet added to its description first in the 1820’s, is entirely joyous full of tonal colour. It’s a composition filled with uncompromising spirit, providing musicians with an opportunity for a bravura display of musical virtuosity.

Crafted brilliantly, it incorporates a well-known ‘Gregorian chant’ a style of music that transcended the confining forces of history and became the major source inspiration for Western music. Chant’s origins going back at least 1,500 years; its healing, both spiritual and physical relaxation qualities, now recognized worldwide. This final work also includes the theme of Mozart’s very first symphony written when he was eight – a child in a golden age of musical art.

Described as being a ‘wunderkind’ performer, he composed his first work in a house at Ebury Street, London for 2 oboes, 2 horns, harpsichord and strings and it was performed first in February, 1765.

The Jupiter piece builds regally throughout, the work characterized by a ‘grandeur’ that is often heroic while alternating harmonically opposite moods of both mellowness and power.

Its melodies are memorable. They resonate with great significance for the man who composed them; their personal nature evident.

This could be construed as if Mozart was already preluding his own early demise, reflecting on and questioning his own journey through the musical life.

It had. In just three decades of his life on the then world’s stage, his work had reached a point where he achieved a perfection of style and composition. Perhaps it was one he had not ever believed or imagined possible and he was really questioning his seemingly innate genius?

Mozart’s Jupiter will be a perfect way to end the orchestra’s fortieth year. It is about majesty of performance, reflecting the whole premise of music played originally by a chamber orchestra; the music of friends, an intimate celebration and reflection of the joys of life. It’s full of eagerness, joyful spontaneity and deep heartfelt emotion, with wonderful changes in style that engage all our sensibilities.

There is no doubt the 2015 ACO Season will be a tour de force ride, one that culminates in an astounding display of magical ensemble polyphony; stunning music with a multiplicity of sensational sounds.

Works by Melbourne photographic artist Bill Henson are now on show in a solo exhibition that boldly begins NGV Festival of Photography – until August 27, 2017