Wednesday the 19th of August saw a brilliant turn out for Sydney’s iconic Strand Arcade “evening with our designers”.

I think this incentive is fabulous, putting customers together with the designers means that there is a genuine exchange of thoughts and ideas.

Have you ever wanted to meet one of your favourite designers? I know I have, and I really enjoyed the experience.

Sometimes, if you hold a label or artist in high esteem it can be a tad daunting to engage on a one on one level.

I found this night to be such a positive experience, and judging from the buzzing atmosphere, I wasn’t alone in that thought.

The Strand Arcade is one of Sydney’s finest examples of Victorian architecture being designed by Englishman John Spencer.

To take into account the harsh Australian climate, the roof was fitted with specially tinted glass, a very clever inclusion.

The arcade was opened on April Fools day 1892, described as “the finest public thoroughfare in the Australian colonies”. After a devastating fire in 1976, the painstaking process of rebuilding began and the peoples favourite arcade reopened in 1977.

It remains one of Sydney’s best shopping meccas, with some of our finest designers and artisans occupying the stunning timber facaded boutiques.

The nights festivities kicked off at 6.30pm with fabulous sounds from two top spinners DJ Cassette and Leah Simmons.

There’s nothing like a few cool tunes to get you relaxed and in the shopping mode, oh and a fantastic choice of liquid refreshments also helped. All tastes were catered for.

From the gentleman’s hub where one could sample a glass of Balvenie Whisky and meet the very dapper author Jeff Lack who was signing copies of his recently launched mens style guide IndulGENT and then onto the Ladies Lounge for a Solerno Fizz; one part Solerno, one part grapefruit juice, a dash of soda and orange bitters, it was a relaxed ride.

And if bubbles were more your thing, there was an abundance of Brown Brothers Prosecco on offer.

Oh, and I can’t forget the tasty Cannoli being enjoyed by the many punters on the night.

My plan of attack was to start at the top and work my way down.

Level Two is home to the two excellent restaurants La Rosa (where Kate Moss had pizza when last in Sydney) and Pendolino, one of my personal faves, as well as some of the more bespoke items that can be found in the Strand. Take for instance Andrew McDonald, or as his card reads A. McDonald Shoemaker. If you want a “one of a kind, fit like a glove, OMG where did you get those shoes!” pair of treads, then this is your Utopia.

Andrew has been honing his talents with hide for over twenty years.

If you want cool, these are the Keith Richards of boots!

Down a flight of stairs to level one where some of my favourite labels reside. The Corner Shop is home to some of the coolest labels, both international and home grown. In store was Kit Willow and her new line Kit X, which I’m loving right now.

I also got to chat with Cheryl and Vanessa, two of the three sisters that make up label Manning Cartell.

These chicks know their fabrics and how to dress a woman of any shape and height. Then it was down to the ground floor where between sweet treats at Haigh’s, Sweet Infinity Bakery and Koko Black lies a little gem called Rox. 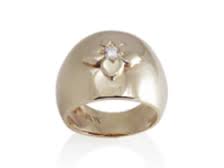 Now Rox Gems and Jewellery has been part of the Strand family for as long as I can remember and I never tire of gazing longingly into their covetable windows. I spoke with the vivacious Kiri Soede, who is one of the designers.

Her passion for jewellery and gems is contagious and as we chatted, I discovered we have a mutual love of the brooch.

These young designers are incredibly talented and it’s wonderful to see semi precious and precious stones in such special settings.Feeling quite inspired by all this creativity I was led to the final part of this special night, a VIP performance from duo Say Lou Lou.

The twins Miranda and Elektra Kilbey, the daughters of Australian music legend Steve Kilbey lead singer and bass player for The Church and musician Karin Jansson, are also the faces of the Strand Arcade’s Spring-Summer 2015 campaign. Just as a little bit of music trivia Kilbey and Jasson co-wrote the indie classic “Under the Milky Way”, in my opinion one of the most beautiful songs ever written.

The stage was set in a gorgeous VIP space in Pitt Street Mall thanks to MasterCard Australia.

Laurent Perrier champagne flowed freely and delicious canapés were served as we enjoyed support act Lisa Caruso, who had previously played in the arcade. She has a gutsy indie-folk sound and a brilliant voice, definitely one to watch.

Next up were the headliners of the night, and even if they had just flown into Sydney that morning there was no tell tale signs.

The girls, who split their time in Sweden and Australia, have an ethereal sound and beautiful harmonies and not to mention amazing genes. One blonde, the other brunette, you can’t help but to compare them to the stunning Anna and Frida from Swedish super group ABBA.

The Strand Arcade’s Spring-Summer 15 theme of duality is a perfect fit for the Say Lou Lou duo, where the power of two is being celebrated.

I feel fashion and music have always gone hand in hand and the pairing of stunning songstresses and divine dressing a match made in heaven. And the fact that two are better than one, well that’s priceless!

One Boy Missing tells a redemptive story of a guy whose failures seem insurmountable, but are resolved in a beautifully crafted riveting mystery by Stephen Orr