Looking out towards the future with a great deal of joi de vivre, The Australian Haydn Ensemble, founded by violinist Skye MacIntosh, is made up of a group of very talented musicians who play on period instruments.

In 2015 they will present a program along with some very distinguished colleagues, that showcases great works. They will pay tribute to their chosen composer Franz Joseph Haydn (b.Rohrau 1732-dVienna, 1809) and other defining composers of a classic era with musical works both sacred and secular.

Creating images for their 2015 program among the very fine selection of eighteenth and early nineteenth century antiques at Martyn Cook Antiques stylish showroom in Sydney was a well thought out setting. It was unexpected and fun for me to be there and meet them all.

This very talented group will be commencing their 2015 year with Haydn’s Seven Last Words, which refers to the seven last phrases delivered by Jesus of Nazareth at his crucifixion on a cross on Calvary hill.

A landmark work composed in 1787, it was an important commission.

It was first imagined as an instrumental meditation to be played in Lent at the Good Friday service in Santa Cueva in Cadiz, Spain, before being performed in Paris, Berlin and Vienna. The much-acclaimed Song Company from Sydney will join the ensemble players to perform atmospherically by candlelight. This should be a very special concert indeed, full of heartfelt beauty, As Haydn explained in 1801, his original composition had been subject to conditions’….

“… it was no easy task to compose seven adagios lasting ten minutes each, and to succeed one another without fatiguing the listeners; indeed, I found it quite impossible to confine myself to the appointed limits”.

The priest Don José Sáenz de Santa Maria who commissioned the work was obviously delighted too, because it is recorded he sent Haydn his payment in ‘a cake filled with gold coins’. Very stylish.

The local custom in Cadiz was to hang black cloth on all ‘the walls, windows and pillars of the church’ while keeping ‘one large lamp hanging from the centre of the roof’. The only light to pierce the solemn darkness would be a metaphor for Jesus; light reflecting the beauty of holiness, with Jesus being the ‘light of the world’.

There wasn’t a historical precedent for Haydn who composed seven instrumental one-movement sonatas, starting slowly but building momentum to the final Terremoto (earthquake). Haydn arranged his instrumental version for oratorio at a later date, in 1795-1796. This happened after he heard a version of his Seven Last Words of Christ composed by Joseph Friebert (1723-1799), a colleague of some experience.

Rather than being annoyed Haydn was flattered and impressed with Friebert’s achievement, although felt compelled to rearrange the work himself for future choral performances.

This happened in 1796 when instrumental and choral vocal forces came together to first perform it.

Simply irresistible…the arts, in all their forms, enliven our experiences, inspire our endeavours, expand enterprise, shape our identity and contribute to our cultural well being.

We make history by reinventing everything eternal in our past. For the second concert on the program superb flautist Melissa Farrow will feature in a concert entitled Mozart’s Flute.

Elector of Bavaria Carl Theodor (1724 -1799) was patron of arts, music and sciences at Mannheim, a centre for culture in the Rhine-Neckar region of Germany’s southwest.

During the period 1720 – 1778 it was considered the ‘culture loving electors from the Pfalz’ were in charge. It’s also the place Mozart met his future wife Constanze. Mannheim attracted the ‘trendsetters’ and Mozart and his family visited the city many times between 1763 and 1790. Interestingly, he was both inspired and informed, especially when he encountered the flute compositions of Johann Wendling who played the flute in the court orchestra, considered the ‘finest in its time’.

Mozart’s father Leopold believed Wendling to be ‘a strikingly talented flautist’. A week after he and his son arrived in Mannheim in 1777 he took Mozart to meet the musician and composer.

Despite the difference of thirty years in their ages, they developed a very close relationship.

Wendling and Mozart also met up in the spring of 1778 at Paris.

They remained in close contact at least until October 1790, when they met in Frankfurt-am-Main.

Mozart composed a Sinfonia concertante to be performed by his friends from Mannheim, including Wendling on flute and they all proved pivotal in helping him to unleash his real genius. From the Mannheim period onward in

Mozart’s life, all of his large-scale operas, piano concertos and symphonies, included glorious parts for the flute.

Melissa Farrow will be playing the Flute Quartet in C Major by Mozart as the finale, a work considered a jewel in his crown of repertoire written for flute, an instrument that had its origins in antiquity.

The middle of the year concert will feature the Beethoven’s Piano Concerto No. 3. The very savvy Neal Peres da Costa, a an internationally renowned historical keyboard specialist of performance in the 17th, 18th and 19th centuries, is the very special guest.

An Associate Professor at The University of Sydney, da Costa will perform with the ‘spirit of adventure’ he has become renowned for.

He will play on a replica Graf fortepiano, very similar to the instrument that composer and musician Ludwig van Beethoven (1712-1773) used to premiere and showcase his Piano Concerto in C Minor on in 1803.

There is a case here for Mozart inspiring Beethoven’s piece, which heralded the Romantic era to come.

It exhibits great beauty and elegance with its graceful, stylish, distinct display of good taste with its ‘intricate details of phrasing and orchestral colour’.

Also on this program is a String Quartet by Joseph Haydn’s younger brother Johann Michael Haydn (1737- 1806) and a performance of Mozart’s Symphony No. 40 in G minor.

This was arranged for Chamber ensemble by musician, composer and music publisher Giambattista Cimador, and adheres to the tenets of historical performance and intimate chamber experiences.

Kahlil Gibran’s reading from The Prophet seems to encompass the mood of the next concert, featuring the Little Organ Mass of Joseph Haydn and Michael Haydn’s Requiem, which will be performed with the Choir of St James. If you would indeed behold the spirit of death, open your heart wide unto the body of life. For life and death are one, even as the river and the sea are one.

In the depth of your hopes and desires lies your silent knowledge of the beyond;?And like seeds dreaming beneath the snow your heart dreams of spring.?

Trust the dreams, for in them is hidden the gate to eternity.?

Both Mozart aged 15 and his father Leopold played in the orchestra for this work when it was played to honour the death of his friend and patron Prince-Archbishop Scrattenbach.

It would also inspire the young Mozart when composing his own glorious requiem.

Spring always brings hope and the Haydn Ensemble will feature two powerhouses of early and classical music in Australia today.

Opera Australia’s soprano Taryn Fieburg will be accompanied by Australian conductor and keyboard specialist Dr Erin Helyard who will be performing the role of continuo for the ensemble.

Dr Helyard recently has taken his wealth of knowledge about early music to a new academic role at ANU School of Music in Canberra.

He is very well known to early music lovers because of his amazing work with the annual Pinchgut Opera program in Sydney and the wonderful festival Hobart Baroque.

This is a program of works composed by both Haydn and Johann Adolph Hasse (1699-1783) for soprano, interspersed with two works for flute and violin, Haydn’s The Miracle and Arianna a Naxos.

Ending the year on a high note with an all-dazzling Haydn program, the ensemble again under the baton of Erin Helyard, will recreate the atmosphere and music of the Esterházy Palace.

This is where in 1761, Haydn was engaged as vice-Kapellmeister at Eisenstadt, Hungary, by Prince Paul Esterházy. Franz Joseph Haydn had a unique ability to combine various styles, moods and intense faith and skill in producing works, both sacred and secular, that won favour with not only the prince but also the musicians of the orchestra.

He remained with the Esterházy household for 30 years, with Prince Paul and his successor Prince Nikolaus, both being passionate music lovers.

The palace of Eszterháza was modelled on the Chateau at Versailles and sited on the south side of the Neusiedlersee. It was in this palace, and in a delightful summerhouse on the estate, that Haydn’s art benefited from his seclusion.

Haydn was enabled to experiment with his own ever expanding sense of musical sophistication, including his masses and sacred pieces. Haydn was recorded as saying “At the thought of God my heart leaps for joy and I cannot help my music doing the same’.

His trio of Symphony’s recreated for this concert were all about reflecting the atmosphere and hours of his day. Le Matin, (morning) Le Midi (midday) and Le Soir, (evening).

As a special treat to play the ‘role’ of Maestro Haydn in this special concert, will be guest co-director, violinist Marc Destrubé from Vancouver.

Modernity is all about the present and great works in any age transcend time, especially when they are like classical music, based on harmonious principles that exist in nature.

Haydn would have approved, he said “Young people can see from my example that something can come from nothing ... ”  He knew that no event would ever diminish the overall value of any work perceived as having beauty of form and structure, one that had been developed as part of the spirit of an age, which found expression in its music, as well as in its architecture, literature, philosophy and social life. 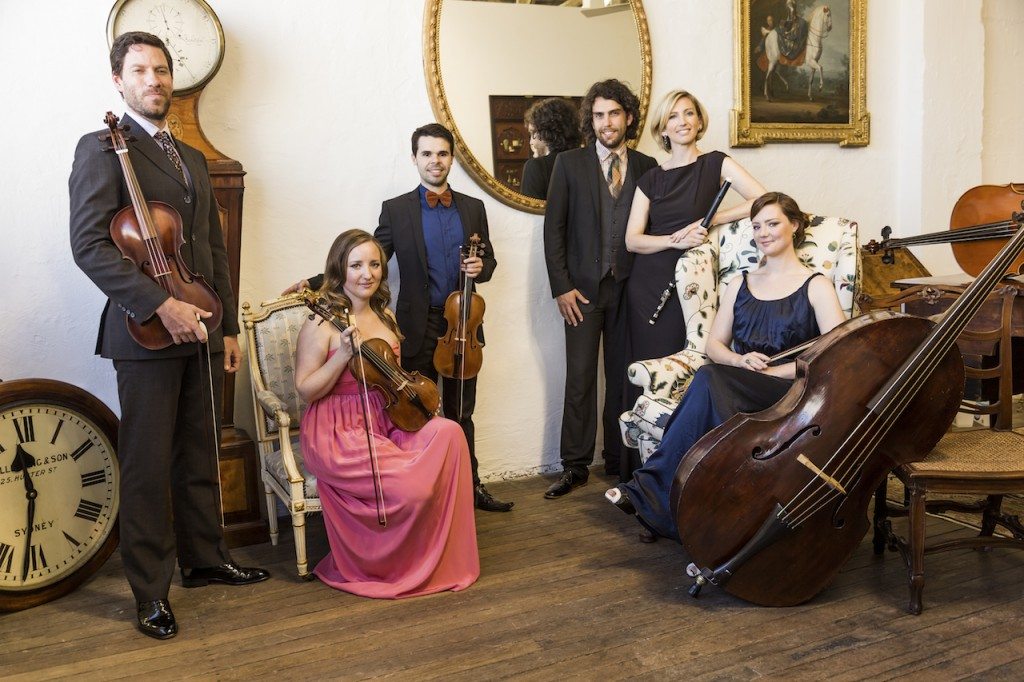 Nineteenth century commentator on all things associated with the arts John Ruskin said fine art was where the hand, head and the heart of man went together.

Period music programs have never looked so good as they do here, with the works of the Franz Joseph Haydn and the great classical composers and musicians, as played by the much acclaimed youthful and inspirational members of The Australian Haydn Ensemble.

StreetSmart is a social profit organisation founded in 2002 with a mission to help the homeless. It is all about the art of what is possible and brings many benefits to others. Would you assist and also inspire others to help support this worthy cause?