Everyone has sounds of music within them breaking down language or cultural barriers while inspiring the imagination, the head, the heart and the soul. One such group is the Australian Haydn Ensemble, who arrived on the music scene in Australia in 2011 and have since gone from strength to strength. Recently they gained an eminent Patron, The Honourable Dame Marie Bishir, AD, CVO, the Chair of the Australian Haydn Ensemble Dr Timothy Pascoe AM announced the joyous news this week.

The Honourable Dame Marie Bishir will be sure to not only guide but also inspire this youthful ensemble of players. She shares their passion for the music of Franz Joseph Haydn (1732-1809). The first female and second longest-serving Governor of New South Wales, Dame Marie Bishir retired in 2014. She became a Dame of the Order of Australia, in recognition of her extraordinary achievements throughout her life and career serving the community, students, young people, Indigenous people and the people of New South Wales. 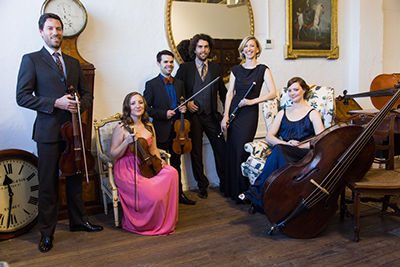 Dame Marie Bishir still remembers how she felt as a young violinist, playing in the Junior Orchestra at The Sydney Conservatorium.  There were always “the inspirational challenges” when playing a Haydn symphony, and, the part his trios played in her own initiation to the special qualities of chamber music.

The Australian Haydn Ensemble, founded by Skye MacIntosh, is made up of a group of very talented musicians and their guests, who all play on period instruments.

Their hero Franz Joseph Haydn was the Austrian-born son of a farmer-wheelwright. When he was eight years old Haydn became a choirboy at St Stephen’s Cathedral, Vienna.

He lived in poverty as a teacher and became an accompanist after his voice broke aged 17. He worked for two aristocratic patrons during the 1750s, and in 1761 was engaged as vice-Kapellmeister at Eisenstadt, Hungary, by Prince Paul Esterházy.

Haydn remained with the Esterházy household for 30 years. Prince Paul and his successor Prince Nikolaus were both passionate lovers of music. In 1766 Nikolaus built the palace of Eszterháza (modelled on Versailles) on the south side of the Neusiedlersee.

It was there in a delightful summerhouse where Hadyn’s art finally benefited, his being alone ensuring that he ‘was forced to become original’.

The Australian Haydn Ensemble is original, its 2016 Concert Season of superb chamber music will engage your heart. Their program this year is both diverse and challenging, offering some of their most exciting concerts to date. BOOKINGS

Written by BAFTA award winning writer Peter Moffat – Silk, based on Series 1 and the first episode of Series 2 that started in the UK recently, is certainly not expected to lose its lustre in any way.