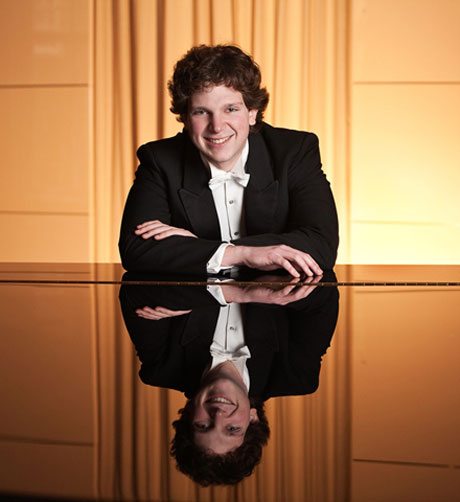 Symphony Orchestra traditions around the world are generally based on the presentation of classical music, composed by those considered giants of the music world. The word classic is defined by Oxford as meaning ‘of the first class of acknowledged excellence’.

He will appear as a soloist playing Beethoven’s Piano Concerto No 2 and opening and closing the concert with two masterpieces blazingly alive with the fiery rhythms of Czech folk music by Antonin Leopold Dvorák (1841-1904), who is renowned for being one of the most versatile composers of all time. He will play The Overture: Carnival and Symphony No 8.

Jayson Gillham has won numerous prizes, including the Royal Over-Seas League AusGold Medal and the Australian National Piano Award. He has achieved outstanding results at major international piano competitions such as Cliburn 2013, Leeds 2012, and Chopin 2010. 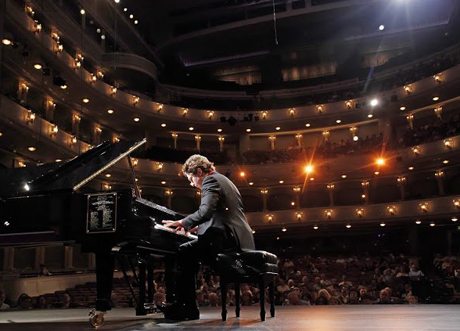 Indeed, Gillham is the only Australian ever to reach the semi-finals of the Chopin International Piano Competition.  And he was only 23 to boot, in a competition usually peopled by very seasoned performers.

He captured the hearts and interest of music lovers across Britain with his performances in the 2012 Leeds International Piano Competition, when he played Beethoven’s ‘Emperor’ Concerto with the Hallé Orchestra and conductor Sir Mark Elder at Leeds Town Hall

Elder commented on Jayson’s playing: ‘He plays Beethoven in a very open, honest, secure way – with a sort of “glow” … always a lovely sound – gorgeous.’

Jayson will also play solo recitals in both Brisbane on 9th March as part of the Medici Concert Series and in Melbourne for Scotch Arts at Hawthorn on the 15th March. 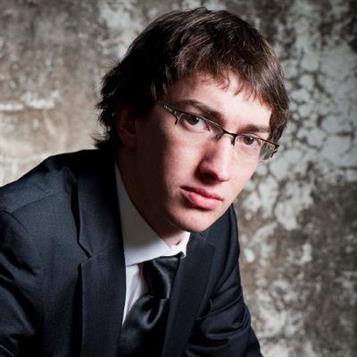 Symphony Orchestras in Australia are also championing youthful conductors, especially one who is busy growing his style and beginning to make his mark on the world.

Nathan, who hails from Hamilton in Brisbane, is currently on the artistic staff of the Boston Youth Symphony Orchestra (BYSO) and is studying Orchestral Conducting at the New England Conservatory in the U.S.A.

Young musicians who attend the BYSO learn the skills necessary for exceptional orchestral playing from some of the most dedicated and talented professional musicians. Nathan with the QSO - Photo by Josephy Byford

He has worked with the orchestras in Tasmania, Adelaide, Queensland and Western Australia, as well as Orchestra Victoria and the Auckland Philharmonia Orchestra in N.Z.

Other works he’s conducting in 2014 in Adelaide are the Richard Strauss Oboe Concerto and Franz Joseph Haydn’s Symphony No 83 La poule.

Symphony Orchestra’s are by their very nature large and grand, full of strings, woodwind and brass instruments played by a variety of musicians, presenting sweeping musical statements and telling stories of great variety and virtuosity.

Darwin Symphony Orchestra (DSO) is one of the youngest orchestras in Australia, as well as one of the most adventurous. Attitude got it off the ground in 1990 when the DSO performed Ravel’s Bolero in the Gorge (Nitmiluk Gorge) and in June 2013 it appointed an Australian with a huge international reputation Matthew Wood as its new conductor, and so everyone’s eagerly awaiting his plans for its future.

From cool swinging jazz to the fiery rhythms of folk music to the beauty and wonder of a composition by Wolfgang Amadeus Mozart or Ludwig von Beethoven, these days Australian Symphony Orchestras cross all musical genre boundaries in their attempts to woo you to their favour.

The programs of concerts and recitals they offer feature a cavalcade of international stars, playing all sorts of instruments and offering many different modes and styles of musical expression for audiences to enjoy.

In their 2014 season the Tasmanian Symphony Orchestra is led by Slovenian born Marko Letonja as Chief Conductor and Artistic Director. He is promising a series of unforgettable concerts, focusing on Vienna, which was the ‘epicentre of the musical world for two centuries.

This especially means music from two of the world’s giant composers who achieved fame in that city, Wolfgang Amadeus Mozart (1756-1791) and Ludwig van Beethoven (1770 – 1827). In the West their Symphony performs in its main concert hall, as well as in unique venues such as the Perth Zoo.

In that place a contemporary diva Kate Ceberano and classical bass-baritone Teddy Tahu Rhodes event will kick starts their 2014 year, with a concert offering a combination of musical theatre, opera and pop music.

It should be some enchanted unique and special evening, inspired no doubt by the huge success of the Australian Opera’s 2013 presentation of South Pacific in that town that finished prior to Xmas in which both Rhodes and Ceberano featured.

In the west in July the West Australian Symphony Orchestra will pull out all stops to present Australian food icons Maggie Beer, the Cook, and Simon Bryant, the Chef, cooking on stage to the sounds of their favourite classical music pieces.

We would have to say this is right up there for innovative, imaginative ways to present great music.

The Queensland Symphony based in Brisbane has invited everyone’s favourite rock-star particle physicist Professor Brian Cox OBE, star of the smash BBC TV series The Wonders of The Solar System, who will narrate while travelling through the cosmos in the Voyager Space Rocket with video footage of the journey to accompany the music.

Cox will also give a talk about the planets in our solar system with video footage, followed by a performance of Gustav Holst’s The Planets Suite by the QSO conducted by Chief Conductor Johannes Fritzsch with accompanying video footage of the planets depicted in the music In South Australia the Adelaide Symphony Orchestra will channel James Bond, with music made for his movies.

From martinis to fast cars, villains, danger and glamorous women, Bond is nothing without the sounds of silky strings, flashy brass and twanging guitars.

Musical scores will include those from Goldfinger, Diamonds are Forever, Nobody Does it Better, Live and Let Die and For Your Eyes Only.

It is promised to be a ‘sophisticated secret spy mission with Mr 007 himself, Noble…Guy Noble’. In Victoria, the Melbourne Symphony Orchestra has Doctor Who up on the big screen, and the concert hall overrun by monsters, including Daleks and Cybermen as they present a Doctor Who Symphonic Spectacular, featuring Murray Gold’s captivating music from the television series. It’s hard to really see the Royal Concertgebouw Orchestra at Amsterdam or the Vienna Philharmonic Orchestra being quite that innovative or creative.

The latter’s New Year’s Concert presents lively nostalgic music to delight its audiences, masterpieces in the spirit of hope, friendship and peace.

But ‘there it is’d, as the King said so eloquently to Amadeus, perhaps that’s the whole point and why Australia is seen by many to be leading the way in creativity and innovation.

Today in Australia it is all about keeping an interest in classical and traditional musical traditions alive, while wooing all new audiences through the door.

The trustees of our classical tradition in music earnestly hope that newcomers will be seduced by the many wonderful works, which have produced so many magical music moments for millions of people over the last 100 years around the world. The King & I, Roger & Hammerstein’s musical masterpiece at the Princess Theatre, Melbourne from June 10, stars Lisa McCune and Jason Scott Lee – Shall We Dance?