It is certainly a long time since the undisputed first lady of the American musical stage Ethel Merman sang There’s No Business Like Show Business, the theme song of her life that built an expectation in the public’s mind that despite all the things that happen if you are an entertainer ‘the show must go on’.

As the conductor said, it is never a good sign when he walks onto the stage before a scheduled concert is about to start. Regular concert goers know it means a huge change.

Although no one would have perhaps believed the change would be what British born Sir Simon Rattle principal conductor of the Berlin Philharmonic, soon to move to the London Symphony Orchestra (LSO) would announce that internationally acclaimed Czech mezzo-soprano Magdalena Kozena would not be appearing.

She was to sing on the concert with the once thought of as logistically impossible Australian World Orchestra (AWO), which he was conducting on August 1, 2015 at Hamer Hall in Melbourne for one night, having completed two nights in Sydney. 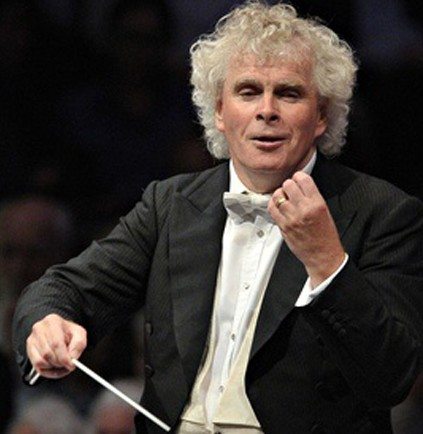 Magdalena Kozena was to perform a new arrangement orchestrated by Australian composer Brett Dean of the original song cycle for the voice and piano by French composer Claude Debussy (1862-1918), the Ariettes oubliées or forgotten songs 1885-1887.

It was the second work on the first half, the longest by far. Kozena not being able to be there for whatever reason left a big hole in reality.

This meant that immediately following the orchestra playing Debussy’s beautiful ten-minute symphonic poem for orchestra, a breathtaking slow meditative work of musical impressionism Prélude à l’après-midi d’un faune (Prelude to the Afternoon of a Faun), it was suddenly interval.

To say this was awkward would be an understatement. In anticipation the audience were ready to embrace a big program and it would not be honest of me not to say the announcement took the ‘edge’ off their anticipation and enjoyment of the initial work.

Also taking everyone in and out again in such a short time was disruptive to the mood and ambiance to say the least, and there were some very unhappy people about during the 15 minute break. The rave reviews and lead up promotion preceding the acclaimed Australian World Orchestra’s arrival in Melbourne had worked. Basically they were playing for a sold out audience, many of whom seemed young newbies.

Despite being grown ups, which means being be able to take disappointment in our stride, in fact some were struggling. This is an age of ‘feeling’ after all and perhaps some had never been challenged to think about such an eventuality, believing someone should have enacted a miracle and fulfilled their expectations.

The AWO and Sir Simon Rattle were left relying on the success of their presentation of one of the last great symphonies of the ‘romantic age’ Anton Bruckner’s lesser known stunning Symphony 8 to both win and wow the crowd.

The standing ovation seemed a long time in coming, taking a few curtain calls before sections of the audience scattered all over the auditorium started to rise.

Once they had it was like a huge wave that just kept rolling on. Born into the period alongside the later romantics who were insatiable idealists, Claude Debussy at one point embraced a fashion for short, delightfully intimate pieces symbolic of feeling forlorn.

For in longing for the infinite, which cannot be expressed by mere mortals adequately, he could supply the ideal route to be followed by the listener’s soul.

Reputedly a man of extremes who lived between the worlds of poverty and great exuberance and profusion, it was Debussy’s amazing sensitivity that contributed so much to his works.

He said “I love music passionately. And because I love it I try to free it from barren traditions that stifle it”.

Debussy straddled the period of the later ‘romantics’ and all new musical modernists who were making first and long lasting impressions.

His mature compositional style is one to admire at a time when harmonic subtleties also reigned alongside big musical statements.

He loved harmony, depth of tone and wondrously rich colour giving wonderful attention to detail, as did the Australian World Orchestra in rendering this one glorious work on the first moments of the Melbourne program.

He called himself a ‘musicien francais’, embracing the French musical aesthetics that advocated music should charm and entertain an aspect of music of the past Baroque period, where it was meant to move the soul ‘without tears and violent passions’. The new expanding spirit attached to the later Romantic age as it progressed brought forth new aspirations, finding inspiration in the memories of grand adventures prior to the French revolution that embraced and expounded ideas in literary debate and political idealism. Like all great visual and performance art style movements basically there is three phases, the prelude, the pinnacle and a fading towards the past.

During the romantic age of music the previous gap between melodrama and historic drama in a short time made a massive leap of faith into a future where for a while, poetic pathos celebrated that interior universe to which we are all drawn attracted by complexities and contradictions, implying something more than simple emotion.

As it progressed composers ensured humanity remained subject to the mystery of their positive and negative irrational feelings, celebrating man’s heroic qualities in harmonious proportion with composers like Richard Wagner (1813-1883) and grand opera leading the way.

After interval this was overwhelmingly evident in Anton Bruckner’s Symphony No 8, with the composer being an admirer of Wagner, placing emphasis on his orchestra brass in grand harmonic style.

Austrian composer, organist and teacher Anton Bruckner renowned for his organ improvisations, exerted great influence on the history of music well into the 20th century.

Bruckner composed his Symphony 8 in 1887, helping to build a ‘community of feeling’ in an age when music for the future was a ‘focus for great cultural and political energy’.

The Symphony 8 by Anton Bruckner (1824-1896) is a monumental complex masterwork of music, one reported as being integral to Sir Simon Rattle’s soul. 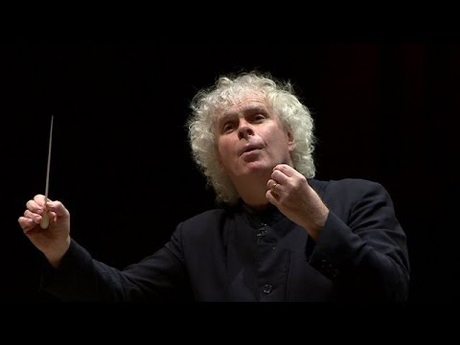 Sir Simon Rattle coaxing the best from his performers…

He impressively proved this by conducting the work without a score, not a normal occurrence in the world of musical excellence.

The Symphony 8’s great length of one hour twenty minutes required total commitment from the audience who embraced its awesome sheer breathtaking magnificence.

The AWO now a reality after over twenty years of being planned, was brought together finally by its Chief Conductor and Artistic Director Alexander Briger.

He was keen to highlight what Australian musicians who have achieved magnificently in their careers around the world could achieve together if they were able to render great works in a festival atmosphere. Many play with some of the greatest orchestras in the world today and Simon says that ‘the AWO is the best party in the world’.

They all certainly reached a high level of excellence in enacting Bruckner’s audacious vision, especially when infused by Simon Rattle’s energy which he seemingly transmits to the players by osmosis.

His personal conducting style is formal, sparing as with modern minimalist persuasive gestures, he urges the musicians towards a pinnacle of technical brilliance.

What a work of a monumental imagination Bruckner’s 8 is. Both complex and compelling it does not always paint a pretty picture of what the future may bring. While some at the time it was composed saw it as a work of ‘culminating achievement’, yet others disavowed it altogether.

Sir Simon Rattle believes it is a work of emotional depth and generosity and by choosing such a rare composition he hoped to reveal the artistry of the musicians of Australian World Orchestra.

Like all great music of its time Bruckner’s Symphony 8 needs to be approached in its historical context. Though provoking, it attacks and challenges both the intellectual and philosophical aspects of the mind and perhaps even the limits of human endurance.

Austrian composer of Slovene original Hugo Wolf, a man who shocked readers of his column in the nineteenth century Viennese equivalent of the famed “Ladies Home Journal’ wrote “…this symphony is the work of a giant and surpasses the other symphonies of the master in intellectual scope, awesomeness and greatness…its success… a complete victory of light over darkness’. Whether playing powerfully with great resonance, or slowly with sublime sensitivity and great commitment, the some ninety five Australian artist musicians who had returned from over thirty cities around the world to perform, respected their conductor and his baton giving the work dignitas.

Eight double basses, three harps, an impressive brass section alongside a simply awesome string section all in concert with each other, this group of Aussie artists sturdily crafted this at times overwhelming work although the sheer enthusiasm of the string section seemed at times to drown out the dynamics and delicate balance of the woodwind. The final Adagio was a high point, although I would have enjoyed it much more if the audience had allowed a considered pause to punctuate Bruckner’s ideal of a ‘blazing calm’, although alternatively many may have felt as if they had descended into an abyss where demons battle indeterminably. You don’t say… seems like an appropriate punch line, Bass players of the Australian World Orchestra

My feelings when it was all over have remained ambivalent. This means my mood as a reaction to the evening is probably better expressed by my relating a verse of the lyrics from the Ariettes oubliées the poetry of Paul Verlaine (1844-1896), which Claude Debussy so eloquently put to music…

PS: My companion wanted me to record that she enjoyed her first look at the new look Hamer Hall in Melbourne, with its supposed best ever acoustic.

She related how she also enjoyed the whole experience and the talking points the concert raised, which we were unable to discuss after, discovering that all the bars were closed in Hamer Hall except to “Platinum” Payers.

A search of the nearby Arts Centre also failed to turn up a hot beverage on such a cold night, the Curve Bar queue being over a half an hour long and it was only 9:50 pm when we were leaving. Really Melbourne!

English composer John Dowland’s original songes and ayres continue to delight audiences four and a half centuries later, which is a cause for celebration indeed