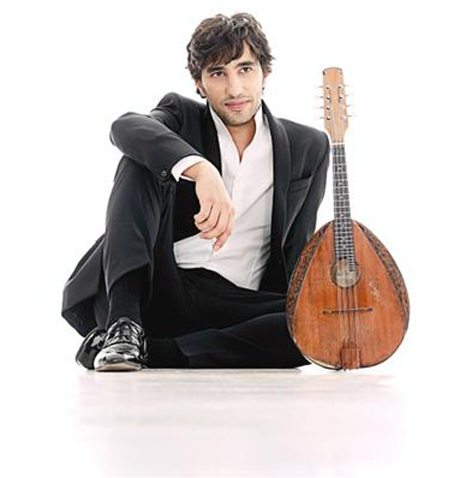 “He’s handsome, he’s fun, he’s poised and refined, and plays with clarity and virtuosity beyond his years,” says artistic director Paul Dyer of Israel’s talented performer and composer Avi Avital, who will play with the Australian Brandenburg Orchestra for their second twenty fifth anniversary concert in May, 2014.

Avital is best known for his interpretation of well-known Baroque pieces and folk songs, many of which were originally written for instruments other than a mandolin. He is considered one of the emerging young superstars of the world stage right now, playing his chosen instrument of choice with a clarity and professionalism that belies his years.

Avi Avital is “… a brilliant musician who has re-imaged the world of the mandolin” Paul Dyer noted, when talking about how he had chosen the emerging young virtuoso player to be on the orchestra’s 25 Anniversary year program. Together they will ‘celebrate the mandolin, the chameleon of the music world, with a captivating journey of beauty and romance’. Mandolin custom made by Arik Kerman

The concert also features the famous Pachelbel Canon, and 20th century compositions by Béla Bartók and Manuel de Fall. Dyer commented on Avital’s choice of works (2) by Johann Sebastian Bach (1685-1750) that he transcribed for the mandolin himself and will present on this very special program.

Whichever way you look at it, Dyer points out “Bach’s music is full of secrets. No matter how long you’ve been playing it, there is still something to discover every time. Using a different instrument allows you to hear its timelessness in a new way.”

Historians consider the mandolin as a cousin of the lute, also being popularly revived by Baroque artists around the world. It came into its own during the eighteenth century then suffered a ‘stately decline’. During the 20’s it had a revival, especially in America’s west.

However in the 21st century, for Avital and on his handcrafted instrument it is a whole new challenge, one he embraces with great alacrity. One American critic commented recently that it certainly did not hurt that Avital played the mandolin with the ‘same kind of loving fervour with which a rock guitarist might cradle his guitar.

Avital has been quoted as responding “God put a mandolin into my hands. Who says he doesn’t have a sense of humour.

Being a member of an ancient culture whose descendants reach back into the mists of time also means that Avi Avital reveres traditions, respects rituals and honours art. For him playing music is a religious experience, especially the synthesis of its many and varied kinds of sounds. Traditionally stringed instruments in many cultures have been plucked, the balalaika in Russia, the bazooka in Greece, it’s an ancient sound that humans respond to. 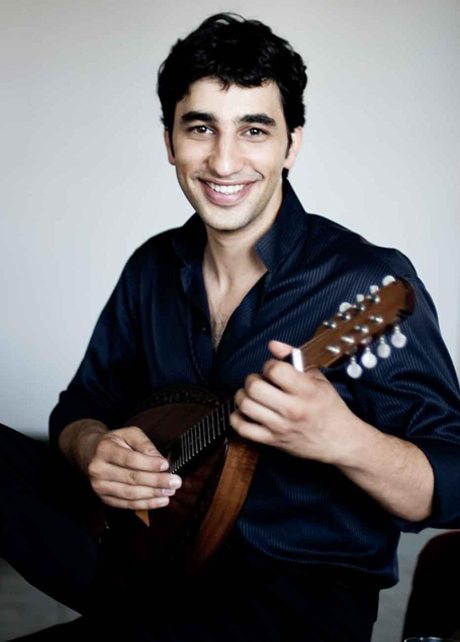 Of Giora Feidman, Avital has been quoted as saying “He’s like my adopted grandfather,”… one you go on a tour with that helps you to bring audiences dancing to their feet. “It was Giora who made me understand that concerts are more than entertainment, that they need spiritual food. And as an artist you are a vessel to serve this purpose.”

A charmer, a musical innovator and a creator, Avi Avital is a graduate of the Jerusalem Music Academy and the Conservatorio Cesare Pollini of Padova, Italy.

He is now based in Berlin and is the first mandolin player to receive a GRAMMY nomination in the category “Best Instrumental Soloist” (2010) for his recording of Avner Dorman’s Mandolin Concerto (Metropolis Ensemble/Andrew Cyr).

He has won numerous competitions and awards, including Germany’s ECHO Prize for his 2008 recording with the David Orlowsky Trio and the AVIV Competition (2007), the preeminent national competition for Israeli soloists.

Avi Avital plays on a variety of instruments including a custom mandolin made by Arik Kerman.

He is used to captivating audiences worldwide and so there is no doubt in my mind that he will be a whole surprise package for Australian audiences to discover for themselves.

He enjoys gathering insights, inspirations, experience and knowledge as he goes. He should find a whole rich new source for material in this wide brown land, very different to anything he has encountered before, influencing and extending his already exceeded boundaries even more.

Bach is for all artists both a challenge and a blank canvas for their unique interpretation of his music.

Each artist paints his extraordinary sounds with their own brush dynamically, and with a real sense of their timeless qualities.

Must say that I am certainly looking forward to my all new encounter with Bach, the mandolin and its handsome young player and finding out just how adaptable it, and he can be.

The Melbourne Recital Centre, with the stunning acoustic of the Dame Elizabeth Murdoch hall, should suit it admirably. Supported by Paul Dyer on his wonderful harpsichord and the stunning array of period instruments played by the talented musicians of the Australian Brandenburg Orchestra , this concert is sure to be yet another memorable ABO Baroque + music event.